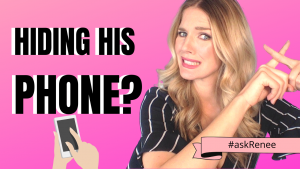 What does it actually mean when he hides his phone from you? When he turns it down or he takes it everywhere with you, and it’s really obvious that he doesn’t actually want you to see his screen?

Let’s talk about the reality of that in this blog!

Hey everyone, welcome back to my blog. I’m Renee Slansky. I’m a professional dating and relationship coach, and I help millennial women in this world find the relationship that they are worthy of.

Let’s talk about modern dating issues, the hiding of the phone. Now, if you haven’t checked out my other video, does he allow you to have access to his phone and everything like that, you can go and check that out here, and I highly recommend it.

However, in this instance, what does it mean and what do you do if you feel like he’s either got his phone face down all the time when you’re together, or if you’re on the couch, he has his screen tilted away from you so you can’t actually see it, or he goes to the toilet and he always takes his phone with you.

Since it’s not just a habit, it’s more rather something that he specifically does when he’s with you because he doesn’t actually want you to say who’s he on the phone with and texting.

Truth is, ladies, unfortunately, it probably does mean that he is hiding something or concealing something from you. There is absolutely no reason for somebody not to want you to see their phone unless there isn’t something they don’t want you to say.

Any sort of act that is an act of secrecy, not privacy, can actually lead to distrust in a relationship.

Secrecy is to conceal and hide something. Privacy is to protect.

For instance, if you’re in a relationship, you don’t want the whole world to know your business so there are certain things that you may keep private.

However, if somebody is concealing something from the other person or hiding something, putting their phone down, lying about something, then obviously that’s a whole different story and there’s a lot of distrust there.

What do you need to do?

1. You need to address it straight away

Address it in a way where you’re not going to start accusing him, but rather you ask him, “Hey babe, who are you texting? Who’s that on your phone?” And if he says, “Oh, it’s no one,” or “Just a mate,” then what you can do is you can try and get up and go and see if he allows you to have that viewing chip off his phone.

For example, if he’s texting next to you and he’s got his screen like that, and you say, “Hey, babe, who are you talking to?” and he says, “Oh, it’s no one,” then you can say something as simple as, “Oh, let me see.”

2. Addressing again straight away, why he feels the need to actually conceal he’s screen from you.

You say it like that. “Well, if it’s no one, then why do you hide your phone from me? I’m just trying to understand here. I’m not accusing you of anything, but I find it really interesting that every time you get up and go to the toilet, you take your phone with you or every time we’re together, you never have your phone out and you never want me to see your screen.

You know that I’ve always got my phone out and I don’t care if you look at it, yet I don’t feel like you do the same. Is there anything that you’re not telling me?”

Now that’s obviously a really kind of confronting question, and chances are he’s not going to tell you the truth. Let’s just be honest, because it’s so confronting. He’ll probably say, “Oh, it’s nothing.” Or if he gets on the defensive, then you know it is actually something.

Stay calm. Don’t go and start raising your voice. Don’t go into crazy mode. Be really level-headed, really level-toned and come across like you’re just having a calm, mature conversation with him. You’re not accusing him of anything.

You’re merely asking a question and then you’re backing it up with evidence of his behavior.

3. See what he is consistent in

If you’ve addressed the issue, you’ve asked him the question and he’s then denied it and he still keeps doing it over and over again, you need to give him a consequence and you need to set a boundary.

And the best way to do that is to say to him, next time he doesn’t get up late and say, “Look, I’m going out for a little bit. And when you’re ready to actually be open with me with someone who you’re constantly texting, but you don’t want me to see, let me know, because then we can actually talk.”

Don’t just sit there and take it and pretend that you’re okay with it, when you’re not okay with it.

Now, if you’re constantly finding yourself in these sorts of situations where you’re dating a guy and you feel like he’s doing all these little secretive behavior things, chances are, you’re not actually able to see the red flags about his character and so what I suggest is two things.

Either go and download my Red Flag Guide Cheat Sheet that I have, which literally tells you things to look out for early on so you don’t find yourself in these conundrums later on down the track, or go and check out my free training, Why Love Sucks For You and How to Make It Not Suck.

This will really help you understand maybe why you’re attracted to certain people or why you put up with certain behavior, and why then you second guess yourself and then wish you don’t and then just end up in this toxic sort of cycle.

The link for that is all going to be down below on this video, along with so many other of my free trainings and guides. Go feast your eyes on it all and hopefully it will bring you some clarity and some breakthrough.

4. If you’re with someone who constantly hides their phone from you and you’ve addressed them,  ask, give them a consequence, and you then need to communicate verbally what your standards are.

All right, the last thing that I want to say about this. If you’re with someone who constantly hides their phone from you and you’ve addressed them, you’ve asked them, you’ve given them a consequence, you then need to communicate verbally what your standards are.

It’s not just enough to talk about it and then just sit back and not tell them, “Okay, well, this is what I would like.” You have to be very black and white with guys, and you need to say to him, “I don’t appreciate it when you hide your phone from me,” or “I don’t appreciate it feeling like there’s some sort of secrecy between us.

I don’t want to build mistrust between us and I want us to be transparent. If you’re having temptation outside of our relationship, I want to know about it so we can talk about it and address it.”

Having these really mature conversations that are direct and to the point without a whole lot of emotion is the best way to get through to him. And it’s also the best way for you to work out whether or not this guy is ready for the type of relationship that you want.

All right, ladies, I hope that this blog has helped you. Let me know if it has by putting a “Thanks Renee” down below  of this video and let me know what you’ve decided to do.

Remember that you don’t have to settle for second best. There shouldn’t be secrecy in a relationship.

If you’re already having a couple of these inklings that there’s something going on, then listen to your gut. Just don’t react out of it.

Instead, have a conversation and communicate to him about it, and then work out after you’ve had that conversation what needs to be done next. Until next time, have an amazing day and I’ll see you ladies soon. Don’t forget to subscribe and give me a thumbs up here in my YouTube Channel.