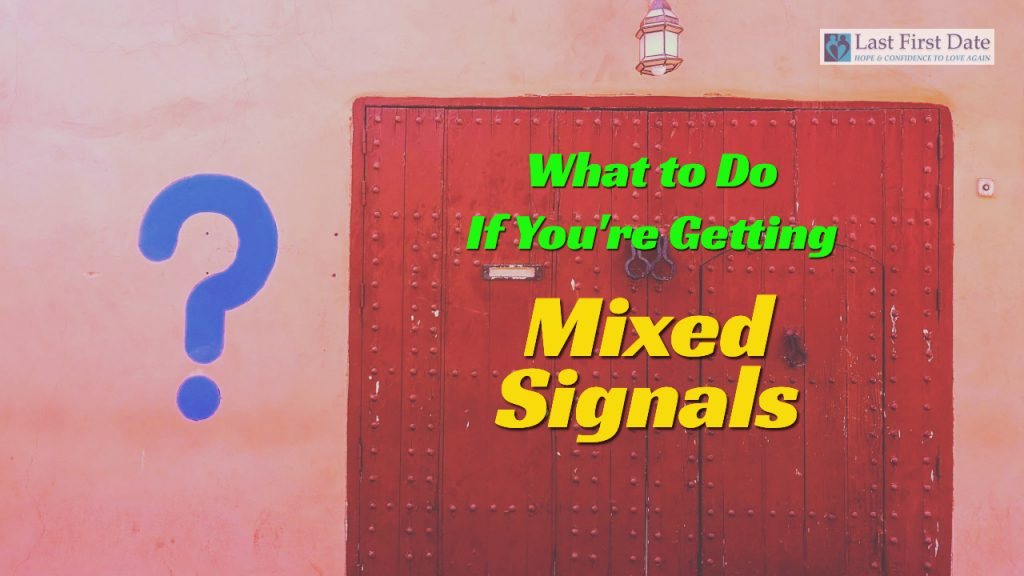 Posted by Sandy Weiner in understanding men over 40 | 0 comments

If you’re getting mixed signals in dating or relationships, here’s what you can do about it to save your dignity and sanity!

Have you ever dated or been in a relationship with a man who gave you mixed signals? Maybe he said one thing and meant something else. Perhaps he came on strong at first but sometimes seemed disinterested. Mixed signals can make you overthink, overanalyze, and confuse the heck out of you.

In this video, you’ll learn why people give mixed signals, and what we can do about them.

If he’s not that into you, it will be pretty clear, but you may not want to see it. He’ll seem distracted. He’ll forget he made plans with you. He’ll be attentive when he’s with you, but sometimes stop communicating for days when he’s on his own.

If he’s recently divorced, separated, or widowed, or he’s consumed with work or a sick parent or child, he may think he’s more available than he actually is. He likes you a lot, but he’s held back by anger at an ex, sadness about his loss, or trying to balance work and the rest of his commitments.

What about someone with an insecure attachment style, leading to ambivalence about the relationship?

People who grew up in homes without secure attachment to their caregivers often have attachment traumas in their romantic relationships. They want you until they get you. They pull away, and you get more anxious, which makes them want you less. You pull away, and the chase starts again. This is crazy making!

It’s common to have mixed feelings, uncertainty or indecisiveness concerning any relationship until you’ve gotten to know each other better and feelings become clearer.

But, when those mixed feelings lead to ambiguity after the relationship has progressed, it can lead to anxiety and fears. It can feel like you’ve lost all control in the relationship, and the other person has all the power. Mixed signals keep things off balance and can create distance.

You don’t feel you can count on him. You wonder if he has the capacity to be emotionally responsive to you and your needs.

The good news is, there’s something you can do to take your power back, no matter the cause of the ambiguity.

He may or may not be capable of commitment and intimacy, but you won’t know if you don’t speak up.

Be open to hearing his thoughts and feelings, and accept whatever he says as the truth. He may not say what you want, but the truth is so much better than living with false hope.

If he gets defensive when you have this conversation, or he continues to send mixed messages, this is a clear vicious cycle.

The more clarity you have about what you will and won’t tolerate in a relationship, the closer you’ll be to finding that special partner, someone who is capable of consistency, follow-through, and clear communication. This is how you get to your LAST FIRST DATE!

If you’re feeling stuck in dating and relationships and would like to find the love of your life, apply for a complimentary 1/2 hour breakthrough session with Sandy here: https://lastfirstdate.com/breakthrough

If you want to go deeper with Sandy about this topic and many others in a group setting, check out the Woman of Value Club monthly membership group. Great value/low price!

Get a copy of Sandy’s book, Becoming a Woman of Value; How to Thrive in Life and Love.