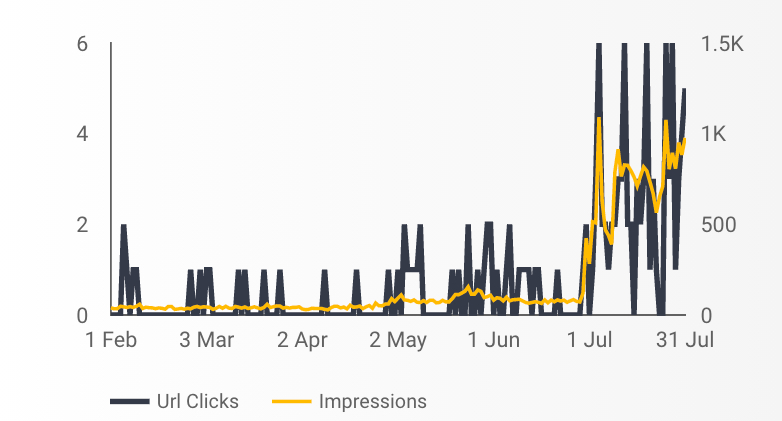 The summer of 2021 has been a busy few months for SEOs across the world, with a few Google updates and fluctuations in Organic performance.

SEOs saw the first large search result fluctuations on 2nd July and the second around July 9th, which is probably related to the tail-end of this July core update.

I personally experienced some massive gains for some competitive keywords for a few of MintTwist’s clients. The main things i noticed were rankings improving, more SERP clicks and impressions.

According to analysis from several data providers the July core update was smaller and less impactful than the June core update but we definitely saw rankings change quicker.

Local SEO was also impacted according to BrightLocal’s Local RankFlux’s data however when Barry Schwartz posed the question to Danny Sullivan, Danny’s response was that the core update does not affect local packs. It was strange to see local listings shakeup. Personally, i never saw any local changes in my clients.

Later on, Danny gave a second response saying core updates can impact local but it depends:

Here are some screenshots of changes noticed from some SEOs:

Also in July, Google announced that it began rolling out a new algorithm update for Google search named the Link Spam update. This update

[This update] is even more effective at identifying and nullifying link spam more broadly, across multiple languages

The main aim of the update is to nullify spammy links but not penalise them (just not count them).
It was rolled out on 26th July and was planned to be rolled out in two weeks but took much longer.
On the 24th August Google Danny Sullivan tweeted that the update has been rolled out:

Some SEOs started to see change mid-August and some have claimed that Organic traffic has dropped whilst some say traffic has increased for them.

Glen Gabe tweeted some screenshots from SEMRush on some changes which he saw:

This is the revised chart of the Google page experience signals:

So that’s a quick overview of the main SEO changes in July and August.
The main things that happened was the July Core Algorithm update which ran from Let’s start up with the big news in July – the July Google Core Algorithm update, which ran from the 1st until the 12th July 2021, and the Google Link Spam update which rolled out from the 26th July to the 24th August.