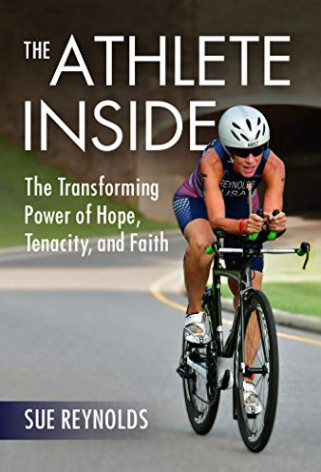 This was the name of an inspiring book by Sue Reynolds. In additional to being uplifting, there are some very interesting aspects to her story. Short version: she went from sedentary and morbidly obese at sixty years of age, to a world-class triathlete in her age group a few years later.

The first interesting aspect was the unusual way she got into overeating in the first place. She discovered in college that she had the tenacity to do “all-nighters” while studying for important exams, but had trouble staying awake. Constantly nibbling on snacks got her through the night, and she got good results on her tests. Later, after being happily married, she was working long hours at a nonprofit she deeply believed in, that helps underprivileged children achieve better results in school. When important deadlines came up like needing to complete a grant application, she used the same trick of staying up late while snacking to keep going. And weight piled on.

She was morbidly obese at 335 lbs., and approaching the age of sixty. She had made various attempts at dieting unsuccessfully, always gaining the weight back. She finally came up with a better “why” for losing the weight (a crucial step according to psychologists): she was just tired of all the limitations her size imposed on her life: like being unable to get down on the floor to play with her grandkids, sit in a booth at a restaurant, or fly in an airplane without a seatbelt extender. So she finally approached weight loss as a lifestyle change, and joined Weight Watchers.

She’d found the right “why”, but still not the right “how”. Weight Watchers has a points system that tries to encourage choosing healthier foods. However, the only hard and fast rule is not exceeding your points budget. Sue figured out she could spend her allowance for a whole day on things like pancakes and donuts for breakfast, then gut out not eating the rest of the day. I know that If I were to try this it would take an astonishing amount of willpower to not binge later in the day. But she managed to do it, for an extended period of time, and lost more than 60 pounds. But now the weight started to creep back on, the nightmare anyone trying to lose weight. She decided to make two changes- start making healthier food choices, and start exercising.

Exercising started out with walking, and she worked up to doing a 5K walk. She set her sights on being able to run 5K. But somewhere along the way she found she enjoyed riding a bike. And a friend suggested she should try swimming. Overweight people can have an advantage at swimming because of buoyancy, but unfortunately often don’t want to do it because they are embarrassed wearing a swimsuit in public. Sue fought through her embarrassment and found she was indeed good at swimming. Soon after she found out there is such a thing as a triathlon. And there are even indoor ones for beginners, where the run is done on an indoor track, the bike portion is on spin bikes, and the swim in a pool. She managed to complete one of those, and was hooked. Nothing could keep the athlete inside from getting out now.

Over the next several years, Sue participated in multiple sprint distance triathlons (now outdoors). This is a 750 meter (about half a mile) swim, a 20K (just over 12 mile) bike, and a 5K (just over 3 mile) run. Many triathletes start out with these and then progress to longer versions, but Sue found she enjoyed the challenge of getting faster, especially when she started doing pretty well in her age group. Over the next several years she got progressively faster, and eventually hired a coach. She went from doing well in the 60-64 age group locally, then nationally, and finally made the US team for the world championships multiple years in a row. As of the writing of the book her best placing was number 6 in the world. Along the way her weight kept dropping off, until she bottomed out at a healthy competitive weight of 135.

This is an amazing journey from being pretty much sedentary most of her adult life to becoming a world-class athlete later in life. What an inspiration. I’m sure many of us have an athlete in one form or another hidden inside. It’s a matter of finding it and letting it out.