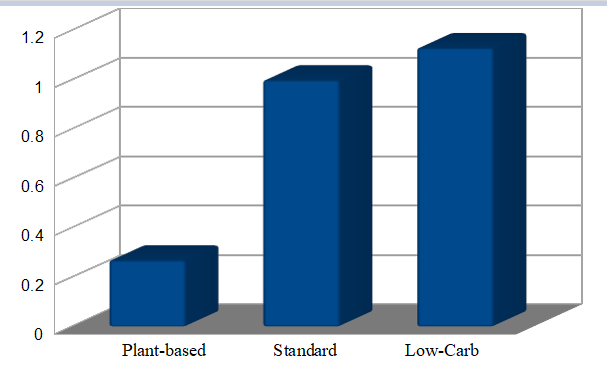 One personal anecdote I have is that for the since switching to a whole-food plant-based (wfpb) diet in early 2017 (more than four years ago), I have not had any colds or the flu. I used to get either one at least once a year, even though I’ve always gotten a flu shot. That didn’t dawn on me until recently. I knew from Dr. Greger’s book How Not To Die, that the wfpb diet is protective against infectious disease, he has a whole chapter on it. For one, wfpb boosts our immune systems. Eating less meat also exposes us to possible bacterial contamination from meat (salmonella being the most well known) as well as possible antibiotic residues which can help spread (I’ll discuss that more below).

So it had occurred to me to wonder if wfpb eating is protective against Covid19. The answer is yes, but I was blown away by a recent study that shows the extent to which it helps. Thanks to Mic the vegan and his youtube channel which showed me this. Bottom line, eating plant-based instead of a typical modern diet made people only 27% as likely to get moderate to severe symptoms of Covid19- That’s four times less likely. Details: The authors contacted thousands of healthcare workers from six different countries (France, Germany, Italy, Spain, UK, USA), all of whom had significant close contact with Covid19 patients. They had them fill out questionnaires about their eating habits. From this, they were able to analyze them into dietary subgroups including plant-based, low-carb, and standard modern diet. They then analyzed how many had contracted Covid19, and the severity of their symptoms. Here is a chart of the results (this is the chance of getting moderate to severe symptoms of Covid19 for each diet type):

The study was not perfect in that the authors were not as tight as I would have liked to have seen in who they put into each category. For example, it would be better if the category were “whole-food plant-based (wfpb)” instead of just “plant-based”. The same is true for low-carb: well-defined low-carb diets avoid refined carbs, as do wfpb diets. But the authors lumped in people who were eating at least some refined carbs in both of those groups. They may not have had enough participants to be stricter, there may not have been enough people ending up in each category. If they had, the low-carb group may have fared somewhat better. But so would the plant-based group. Also, the main counter-argument that low-carb advocates could make against the better results from the plant-based group is “if they did better, it’s because they ate less sugar and other refined carbs”. But the low-carb group also ate less refined carbs. What they did not do is each less animal products, and clearly just eating less refined carbs but not reducing animal products, the results trend the wrong way. So overall plant-based is the clear winner.

The authors did one odd combination that I did not agree with, which they specifically said was because they did not have enough people in the pescatarian category. So they combined pescatarian and plant-based and called that combined category “pescatarian”. They had 40 pescatarians, and 254 plant-based eaters (whole-food plant-based and “vegetarian” combined). They added these two groups together to get what they called a pescatarian group, then stated that “pescatarians” also had a significantly reduced risk for covid19 symptoms. This is misleading, because the majority of people in this combined category did not eat any fish. You could have combined 40 people from the standard modern diet category and the plant-based category and called it the “big mac” group, and would have gotten a similar result. Obviously it would be incorrect to conclude that a “big mac diet” is protective against covid19.

But overall I think this was an interesting and useful study. I think it was clever to choose health care workers, clearly with significant exposure to covid19.

On Antibiotic Residues in Meat

I promised above to return to this topic. For those of you not aware of the problem of antibiotics in meat and its contribution to antibiotic-resistant bacteria, because animals are kept in too close confinement in “factoru farms”, they are much more susceptible to getting sick, and are routinely given antibiotics. Even animals that not sick are given antibiotics because it helps the grow faster. This is discussed in detail on Dr. Greger’s website (see also [1]). In the US, the US Department of Agriculture (USDA) is supposed to inspect for meat contamination including antibiotic residues. But in 2010 the department’s own inspector general audited the situation and criticized the USDA on this:

“Based on our review, we found that the national residue program is not accomplishing its mission of monitoring the food supply for harmful residues…which has resulted in meat with these substances being distributed in commerce….Additionally, [the USDA Food Safety and Inspection Service] does not attempt to recall meat, even when its tests have confirmed the excessive presence of veterinary drugs” [1].

Not only does eating more plants and less animal products make it less likely to get bad symptoms of the current pandemic (and also other infectious diseases), it is likely to help prevent future pandemics. It has been pointed out that there is a close connections between animals kept in close confinement and then eaten, and ALL the Sars, Covid, swine flu, Mers, Covid epidemics of the past few decades, as well as flu viruses in general. All of these diseases originated in waterfowl, and mutate through other animal species to humans. This is much more likely to happen in they animals are in kept in close confinement, as in CAFOs (concentrated animal feeding operations) in factory farms. This is explained in detail in Dr. Greger’s book How Not to Die From a Pandemic and summarized in this video. The scary thought is that Covid19 was just a dry run, and a future even more deadly pandemic could be looming.

The good news, however, is that if we treat Covid19 as a wake-up call, and as yet another reason to eat less animal products (especially factory farmed or from “wet markets”), and more healthy plant foods, we can reduce the likelihood of future outbreaks.