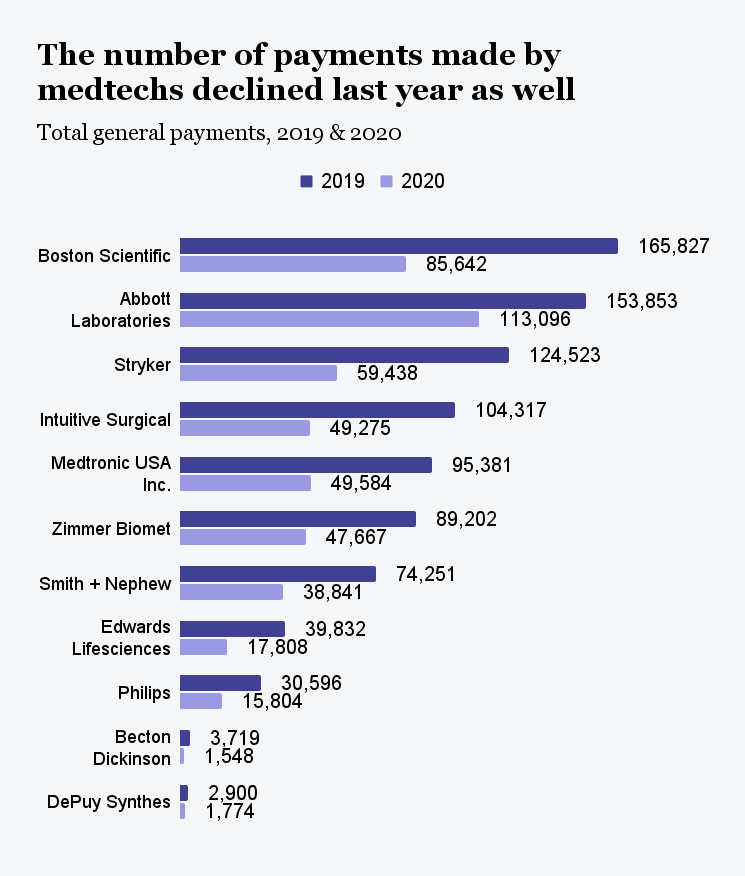 Most of the biggest medical device companies dramatically cut payments to physicians between 2019 and 2020 as the pandemic took its toll on the global healthcare industry.

General payments to physicians dropped in most cases by tens of millions of dollars — and in one case by hundreds of millions — last year for some of the biggest companies in the industry, according to data from the CMS Open Payments database analyzed by MedTech Dive. The number of total payments from top medtechs also saw a substantial drop during the period.

Zimmer Biomet had the biggest decrease, cutting general payments from about $304 million in 2019 to $63 million in 2020. Other notable decreases include Stryker, Johnson & Johnson’s DePuy Synthes and Boston Scientific, where payments fell by about $70 million, $70 million and $54 million, respectively.

Becton Dickinson saw the highest percentage decline of any company analyzed, with payments dropping by about 82% in 2020, though the company was not one of the top in terms of a decline in total dollars spent.

Orthopaedics company Smith + Nephew was the only medtech analyzed that raised general payments, upping pay by about $2 million between 2019 and 2020.

A Medtronic spokesperson said the coronavirus crisis contributed to the company‘s decrease in payments last year due to in-person services being limited.

“As a result of the COVID-19 pandemic, we, like the rest of the industry, experienced a reduction in interactions with healthcare professionals,” according to an emailed statement.

Pharmaceutical and device makers have been required since 2013 to disclose payments to doctors and health systems under a law attached to the Affordable Care Act aimed at shedding sunlight on the often tight financial ties between these players. Data for 2020 were made public on June 30.

The Open Payments database publishes payments from pharmaceutical and medical device companies that make a Medicare- or Medicaid-covered product to physicians and healthcare institutions. General payments include royalty or license fees based on sales of products, consulting fees, food and beverage, travel and lodging and gifts, among others. The database also includes research payments and ownership or investment interests of physicians and immediate family members in reporting entities.

Intuitive Surgical said that the majority of its payments are for training for its robotic surgery system da Vinci.

“The COVID-19 pandemic made it difficult for surgeons to conduct live training and attend in-person educational sessions. Intuitive adapted by shifting some technology trainings to regional training centers to minimize travel for surgeons and OR teams,” a spokesperson said in an emailed statement.

A Stryker spokesperson said in a statement that while the effects of the pandemic contributed to the company’s decrease in payments, the pandemic was not solely responsible as payments vary based on sales volumes, acquisitions of companies and products, as well as new product development.

Zimmer, Abbott, Edwards, Philips, and Boston Scientific did not provide comments by time of publication.

Along with the total amount spent in 2020, the number of individual payments made by medtechs declined.

Payments from Boston Scientific, which had the highest number in 2019, fell from 165,827 in 2019 to 85,642 in 2020. Payments similarly declined by roughly half for Stryker, Intuitive Surgical and Medtronic USA Inc.

Orthopaedics companies were some of the top spenders, with three topping the list in 2019. The companies remained some of the highest spenders in 2020 despite drastic payment decreases.

While companies in the space had some of the steepest payment declines in 2020, almost every major orthopaedic player saw payments spike in 2019. As a result, 2020 payments more closely mirrored previous years.

A spokesperson for DePuy Synthes confirmed the pandemic affected elective surgeries and other in-person activities and contributed to the drop in payments. However, the pandemic was not the sole reason why payments declined because 2019 included one-time payments for technology.

Fears that lucrative payments from industry to prescribers and other health professionals could cloud medical judgment and lead to conflicts of interest were a driving factor in the disclosure mandate.

Companies contend the payments are necessary for product or services development, but multiple studies analyzing the pharmaceutical industry have connected physician payments to an increase in prescriptions of a certain drug, for example.

“These really represent financial conflicts of interest for these doctors, and they conflict, often, with the interests of the patients for whom they care and where the primary interest should rest,” Michael Carome, director of Public Citzen’s health research group, said.

Patients are in the dark about how much the payments from pharmaceutical or medical device companies can corrupt the doctor-patient relationship, Carome contends.

Study authors noted that physicians often play a larger role in development of devices compared to pharmaceutical drugs. For example, medical device companies provide surgeons with training and education on specific products due to the complexity of implanting a device in a patient, which can lead to representatives from companies being in the operating room during procedures.

A Stryker spokesperson contended that physicians and other members of the healthcare industry help companies develop products.

“The healthcare community plays an essential and active role in the development, improvement and education of medical technology that improves patients’ lives,” the spokesperson said in an emailed statement.

Daniel Kracov, partner with the law firm Arnold & Porter, said that while the Open Payments database is a transparency mechanism, regulations like anti-kickback statutes are used as enforcement for potentially illegal payments.

These laws help prevent unlawful payments, such as rewarding physicians for using products, and ensure that companies are paying fair market value, according to Kracov. There are also clinical research rules that mandate companies disclose if significant payments are made to investigators when applying for approval or clearance of a product.

Kracov said that adding additional regulatory enforcements, like a cap on physician payments, may backfire.

“What if a doctor invented the medical device and receives very substantial royalties for that device?” Kracov said. “Why should there be a federal government limit on that innovation?”

Along with other enforcement rules and regulations, Kracov said that the Open Payments database has “had a huge impact on instilling a lot of discipline within companies around their relationships and sensitivity around those relationships.”