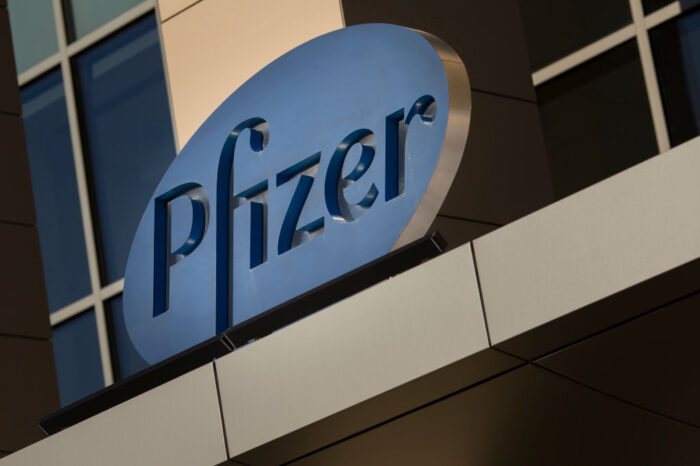 The entrance to a Pfizer office in Cambridge, Massachusetts

Pfizer has made clear that it’s willing to open its checkbook to support growth opportunities, and on Monday the pharmaceutical giant unveiled its latest such deal: a $2.3 billion agreement to acquire clinical-stage Trillium Therapeutics, a biotech taking a novel approach to cancer immunotherapy.

Trillium is developing drugs that target CD47, a protein that sends out a signal that macrophages, a pathogen-chomping immune cell, reads as “don’t eat me.” Blocking this signal enables macrophages to see cancers cells as targets. Several companies, large and small, are developing drugs that also work in this manner but Andy Schmeltz, oncology global president for Pfizer, said that Trillium’s molecules have the potential to be safer and more effective than others in this emerging class.

“While we’re not first, from the way it looks today, we are very bullish on the best-in-class opportunity,” he said, speaking on a conference call Monday.

According to terms of the acquisition agreement, Pfizer will pay $18.50 for each share of Trillium that it doesn’t already own. That’s a more than 200% premium to the stock’s $6.09 closing price last Friday. But that purchase price is still less than the $20.96 per share peak the company has reached in the past year. In the past month, shares of the biotech have been trading much closer to their 52-week low—well below the $10.88 per share price Pfizer paid last year when it made a $25 million equity investment in Trillium.

Trillium, which splits its operations between Mississauga, Ontario, and Cambridge, Massachusetts, has two CD47-targeting drugs in early clinical development. TTI-622 and TTI-621 are both fusion proteins designed to block CD47. But blocking the “don’t eat me” signal is just half the battle. The Trillium molecules also engage a receptor on macrophages that triggers an “eat me” signal. Schmeltz said these drugs have demonstrated early promise in blood cancers, whose cells express CD47 proteins in substantial amounts. He added that these drugs are also showing potential for use in solid tumors, which have been a harder target for immunotherapies.

In April, Trillium reported preliminary data from a 43-patient Phase 1b/2 study testing both of its molecules. In patients whose lymphoma had relapsed or has been resistant to treatment, the overall response rate to TTI-622 was 33%. That response was observed across multiple types of lymphomas. In updated data through late July, the durability and efficacy of the treatment continued with a response rate of 30%. For TTI-621, the first cut of data in April showed that the overall response rate in relapsed or refractory T cell and B cell lymphomas was 18% to 29%. Pfizer did not report updated July data for that molecule.

In addition to efficacy and durability, the Trillium molecules are also hitting key safety measures. One of the challenges for drugs that block CD47 is that this protein is also found on red blood cells, so these oxygen-carrying cells of the blood can also be targeted. When that happens, patients develop anemia. Jeff Settleman, Pfizer’s oncology chief scientific officer, said both TTI-622 and TTI-621 have shown minimal binding to red blood cells. Those results suggest the Trillium molecules could reduce the risk of anemia compared to other CD47-targeting drugs, while improving the therapeutic index—how much of a drug can be used to provide benefit before toxicity gets too high.

“We believe it will be possible to deliver a lower, but still effective, dose of these molecules,” Settleman said.

Settleman added the Trillium molecules hold potential as monotherapies or as as part of drug combinations with currently approved Pfizer drugs and candidates still in the pipeline. Other companies have similar ideas. CD47 has become an attractive target as companies look to expand beyond checkpoint inhibitors, a class of immunotherapies that block PD1 or PD-L1.

Gilead Sciences is the furthest along of CD47-targeting companies with magrolimab, an antibody that the company added to its pipeline last year via its $4.9 billion acquisition of Menlo Park, California-based Forty Seven. Magrolimab is currently in late-stage clinical development for myelodysplastic syndrome and acute myeloid leukemia. Others in the chase with CD47-blocking drugs include AbbVie, which is partnered with I-Mab. That Shanghai-based biotech’s drug, also an antibody, is in early clinical development.

Pfizer has been swinging deals to bolster its cancer drug pipeline. A month ago, the New York-based pharma giant announced a $1 billion commitment to clinical-stage Arvinas in an alliance focused on the development and commercialization of that company’s lead drug in breast cancer. Arvinas is developing drugs based on targeted protein degradation, which harnesses a cellular process for disposing of old proteins as a way of getting rid of proteins that cause disease.

The Trillium acquisition will require the approval of two-thirds of that company’s shareholders, as well as regulatory approvals in the U.S. and Canada.