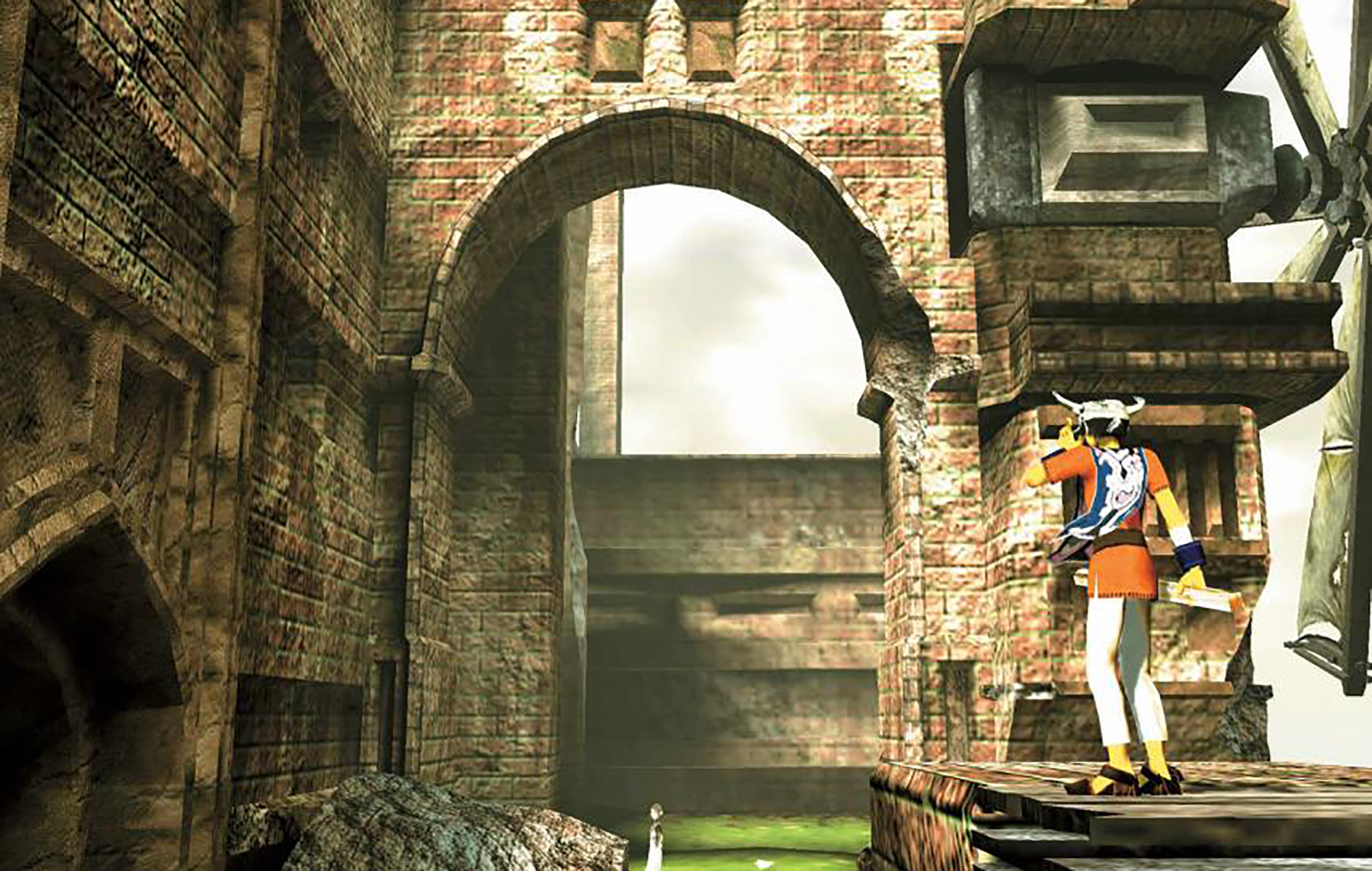 I’ve always been a bit of a sucker for two-handers. A two-hander is a play or film centred on the two main characters. While you might think of witty verbal duels like in Sleuth or Oleanna, my favourites are actually less conflict-driven. I’m thinking of Sofia Coppola’s Lost In Translation or Hong Kong director Wong Kar Wai’s 60s period piece In The Mood For Love. You could call them romances, but more than anything they’re meditative mood pieces about the loneliness of two individuals trying to find a connection in a setting that heightens their sense of isolation, one a foreign city thousands of miles from home, the other in cramped apartments rife with gossipy neighbours.

Released between those two films in 2001 and 2002, Ico (pronounced ‘ee-ko’ – but don’t worry if you get it wrong, I did so too for a very long time) is a single-player action-adventure game developed by Sony’s Japan Studio. Except it wasn’t just about controlling one character as you might expect from a single-player game of this era. Yes, here you play as the titular protagonist – a boy cursed with horns locked away in a castle to be sacrificed – but you also encounter a girl, Yorda, another prisoner in this cursed citadel. Like the cinematic two-handers above, the game is made all the more impactful by dynamics between the two unlikely characters.

A boy with horns and a mysterious, tall-but-frail girl side by side certainly makes for an odd couple. I’m not quite sure of it being sold as a ‘boy-meets-girl’ story, even though there are the evident tropes of an able-bodied heroic male protecting the waifish damsel from shadowy creatures trying to snatch her away into a portal. What we do have, however, are two outcast figures alone together in a singular foreboding and oppressive castle; an extraordinary, symmetrical and interconnected structure that’s among one of the most memorable video game environments ever designed.

It was the first PS2 game that I felt truly lived up to the hardware’s oft-hyped Emotion Engine. This wasn’t because it was the console’s most graphically amazing game (though its art direction does give it an ethereal timelessness steeped in the metaphysical), but because the way it felt in my hands really did evoke emotional reactions from me that games hadn’t done before. And it did it seamlessly, with such grace.

Ico can be called a cinematic game, but not in the way that triple-A games obsessed with mimicking film suggest, throwing you into dialogue-heavy cutscenes or walking slowly forwards while things play out around you. Instead, Ico leans the other way. Its cutscenes are as sparse as the game’s dialogue, which also happen to be realised in a fictional language (Yorda’s speech, meanwhile, isn’t even translated initially). Ico takes clear inspiration from adventure-platformers like Another World and Prince Of Persia and, like them, feels lifelike in movement while its semi-fixed camera and a screen uncluttered by icons make every environment feel like a long shot in a movie you love.

You barely notice the lack of an on-screen heads-up display (HUD), too. Ico is straightforward – Yorda’s body language tells you if she can’t cross to where you are, the only weapons you need are the sticks and swords you find while travelling, and that’s about the entire game, short of the big stone gates that can only be opened by Yorda (something else expertly communicated without the need for all that game-y visual language that could so easily rip you out of this gorgeous world).

Ico’s key mechanic is an intimate one. When holding down the right analogue trigger, Ico will grab and hold onto Yorda’s hand. There are essential, mechanical reasons for this, such as pulling her up to a platform or reaching out to save her from being sucked into a portal by one of the shadow creatures. But even when just traversing the castle, it becomes second nature to run together while holding her hand, which can sometimes look clumsy – like he’s dragging and jerking her along – although when you’re not being chased, the more considerate can hold down another button so that you’re at a walking pace.

This physically tender bond comes with all kinds of connotations, sometimes romantic but also familial and protective. And that makes sense when you look at two of the inspirations creator Fumito Ueda had for Ico: one was a woman holding the hand of a child, and the other was manga series Galaxy Express 999, where the ten-year-old hero is accompanied by his mother on his adventures.

Based on their height differences, I personally always viewed Yorda as a kind of surrogate big sister to Ico. Regardless, your emotional bond still comes primarily through that physical connection. Its effect is heightened by one of the most subtle uses of haptic feedback ever (even DualSense doesn’t have anything on this) as well as the fact it’s not a toggleable action. If you let go of the trigger, so too does Ico let go of Yorda’s hand. Suffice to say the bond feels so real that during moments where a bridge collapses and you’re grabbing onto her hand to pull her back up, I’ve never once considered seeing what happens if I was to let go.

It’s interesting to look at Ico as Sony’s road not taken. The same year saw the release of buddy action platformer Jak And Daxter, which laid the ground for future first-party PlayStation games also centered around bonds between characters: from Ratchet & Clank to the introduction of AI companions in the Uncharted series, The Last Of Us, as well as God Of War (2018), you can still see the impact of this original divergence today.

The difference in these more blockbuster-friendly games was the chemistry and relationships felt more based on the script and performances rather than your interactions – putting down ladders sure as hell didn’t make Joel feel more like a father figure to Ellie, and your companions’ seeming invincibility during combat also lowers the stakes somewhat. Then again, these games were also huge hits, so it’s hardly a surprise that this is the direction the platform holder continues to hone in on.

Ico didn’t rely on the highest production values, a bloated campaign, or hundreds of lines of dialogue to make you care about its pair of central characters – it communicated its stakes, its story, and its beating heart through the gameplay. Whether it’s that fundamental instinct to protect Yorda, her quiet gasp when you’re just clinging to a platform with one hand after a risky jump, or the agonising tension of being forced to solve a puzzle in another room not knowing if those shadow fiends will suddenly appear, the game never lets you forget about that central bond.

Despite the critical acclaim at the time, Ico wasn’t a big seller, certainly not in the US – which can partly be attributed to its god-awful box art – whereas the Japanese and PAL release went with a cover painted by Ueda himself, and inspired by Italian painter Giorgio de Chirico’s The Nostalgia of the Infinite. Ultimately, this had been a symptom of Japan Studio’s output; full of innovation and personality but never quite doing the numbers, and that unfortunate mix finally led to its shuttering this year.

While fans of Ueda often cite Shadow Of The Colossus (and its excellent remake) as his masterpiece, or point to The Last Guardian as his most ambitious work, Ico will always be his most perfect game in its beautiful simplicity. While some also criticised its short running time, its brevity has meant that I can always easily sit down and play through it again – just like I can still sit down to watch Lost In Translation and In The Mood For Love – each time transported and transfixed by its quiet meditative story of two lost souls finding a connection and never letting go.

Alan Wen is a freelance journalist and regular news and features contributor to NME. Ico is available via PlayStation Now. You can read the rest of the Remastered series here.