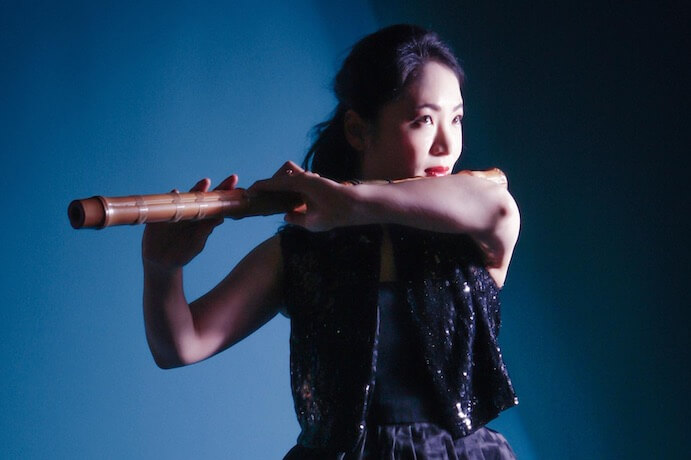 If you happened upon the law firm Hodge Jones & Allen in London, you wouldn’t guess that one of the UK’s most vibrant jazz scenes simmers down in the basement bar after hours — unless you were a follower of the late John Cumming, director of the London Jazz Festival and a mentor to many newcomers. One of Cumming’s last collaborations was with Peter Wiegold, the director of Club Inégales in that basement. Though Club Inégales is temporarily closed, Expect the Unexpected, out September 24 on NMC Recordings, is a highly condensed showcase of their collaboration that works as an alluring kaleidoscopic view of what the club normally offers.

In his detailed liner notes, Wiegold explains that he let each performance run for up to half an hour, giving pointers like “loop, solo, copy, sustain, go back to last section.” Compressing the 17 featured recordings into 70 minutes seems a herculean effort, though the results range from the interesting to the spectacular. With Eastern instruments like the Indian tabla and the Korean taegum (a bamboo flute) blended with standard jazz instrumentation, this is exceptional cross-cultural cosmopolitan jazz. The synergy between the 15 guests and the house band — a combination of young talent and established players — is unshakable. Expect the Unexpected finds a sweet spot between ensemble improvisation from stripped-down notation and avant-garde compositional styles, with almost all of the composers present in the performances. Hyelim Kim’s In the boxes, for instance, is notated in a traditional Koren score (read from right to left); James Mainwaring’s Expansion consists of a circular graphic score to be followed from the center out; the aleatoricism of Mark Sanders’ Carte Blanche has the band play “staccato band hits at random,” and — for good measure — a version of It’s a Wonderful World; Pat Thomas’ Syntax for Muhal consists of more direct indications, though still ambiguous, like “Drums + Percussion 5/4, fast,” or “guitar Bb/C/F minor, 3/4”; while Orphy Robinson’s chaotic Seeing, is believing, is seeing! is loosely guided by a series of photographs.

And if you think the title of the album is gimmicky, I can tell you that Expect the Unexpected earns its name for the sheer volatility of the performances. Take Alex Roth’s The sky dropped a tear; it landed in the ocean…, which opens in the album version in medias res, with an alluring soundscape grounded in a tabla groove that gives it a Hindustani vibe. Or Byron Wallen’s The Carotid Canal, which adds Stockhausen-esque oscillating electronics to a groove in 5/4, over which the composer pulls off a nimble trumpet solo. A wistful violin solo then emerges when the groove dies down. There are remarkable moments of group interplay throughout the album, including unison lines between trumpet and saxophone in this piece. It’s one of the most structurally satisfying and complete-sounding edits. Another standout is Seesaw, by Helen Papaioannou. “Explore as many fragments as you wish, in any order or simultaneously,” she indicates in the score. It opens with hand percussion in shifting meter, with a descending violin glissando. The mordant feel of the second half suggests an evil carnival, with a calliope keyboard patch. It then explodes into a thick groove for the whole band, but the mood quickly changes into a subdued section with wordless vocals and a mournful trumpet solo.

Alice Zawadzki’s In an old theatre is a delight: it consists of a quietly soothing chord progression, perhaps the closest the album gets — among its many guises — to a pop sound. The chords become distended under Zawadzki’s spoken poem — “You exhale and your breath drips with magic” comes close to describing the music itself — and return in their original form to announce her wordless vocals, joined in the end by an evanescent guitar solo.

Among the various moods and styles of Expect the Unexpected, I keep thinking of the exotic pairing of taegum and guitar for Rob Luft’s Optur; the urban noir feel of Alexander Hawkins’ Unequal Baobabs; the swinging accordion in Raymond MacDonald’s If you really want to hear about it, which gives it a Parisian feel; the passacaglia-like descending bass line that anchors Jaak Sooäär’s Led Zeppelin-esque Heavy; and Kuljit Bhamra’s Tabla Tune, for which Wiegold “froze one of the rhythmic patterns” from the opening, allowing for an incredibly smooth and synergistic interplay between tabla, keyboard, accordion, and bass. Though many of the selections by necessity feel incomplete — most are pared down to around four minutes; this could have been a two-CD set — Wiegold finds in the culling process a succinct and highly eclectic expression of all the unforeseen places an unorthodox mini-score can go.