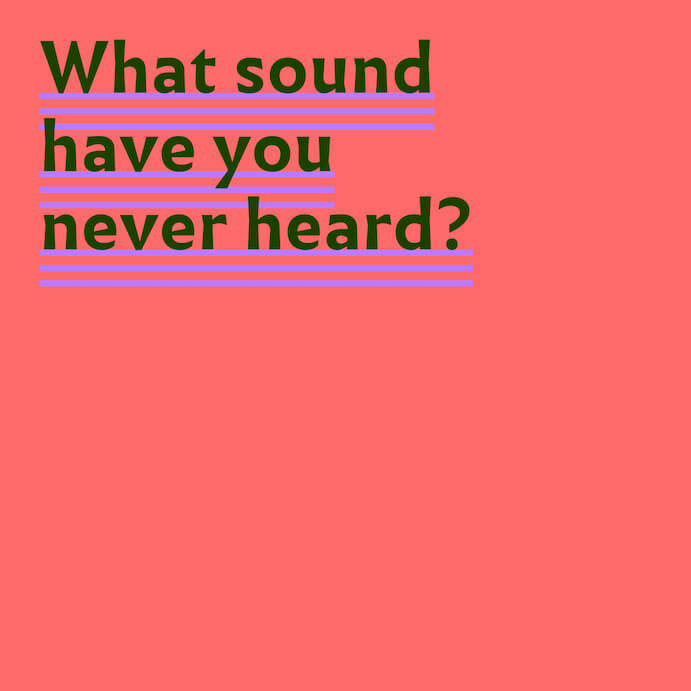 Academia is being held to account. Institutionally, tenure battles are being fought, with high-profile cases such as 1619 Project creator Nikole Hannah-Jones shaping significant public discourse outside the exclusive chambers of higher education. But within specific fields, professors are challenging what information is taught, how it is taught, and even where it is derived altogether.

As Founder and Director of UCLA’s Practice-based Experimental Epistemology Research (PEER) Lab, Nina Eidsheim is making sound public. She is returning sound to its Indigenous roots within our senses rather than locked away in ivory towers. The PEER Lab not only wants to redefine sound, but also how it is received: not just heard by the ears, but also seen by the eyes, tasted on the tongue, and felt in the hands. As a multi-sensory language in need of translation (and no different than other languages spoken around the world), Eidsheim likens this process to decolonization — a heavy word reaching into eons of imperialistic brutality.

How does your use of the word “decolonization” — the act of taking back or returning something that was stolen — connect to the possession of sound and its return to its rightful inhabitants?

In the simplest terms, Western academia itself is a colonial project. UCLA, which hosts the PEER Lab, is a land grant institution occupying the Tongva basin. The PEER Lab recognizes the violence of this past. We seek to help shift this unequal dynamic by questioning the logic, concepts, and language supporting Western thought and academia. For example, Native American Studies scholars such as Prof. Jessica Bissett Perea were instrumental in the Lab’s genesis. Projects in collaboration with Bissett Perea and others are still at the planning stage, but they have already generated active discussions about what decolonizing academia from within means.

The Lab also works to counter how research has historically been exploitative. So often in Western academia, studying communities means appropriating their agency and isolating their traditions within a museum or an inaccessible archive. Institutions with power take marginalized groups’ historical and cultural — their sensorial — heritage and hold it in line with the values of collectors outside the community. The Lab is not interested in plucking knowledge out of communities and putting it on display. We want to foster earnest and mutually beneficial relationships in order to learn from historically disparaged ways of knowing, and to work with community members to create their own autonomous archives and preserve communal memories on their terms, without regard for potential gain for the Lab.

For example, this fall the Lab will begin a collaboration with Great Leap, a Los Angeles-based performing arts organization. Great Leap was established in 1978 to use the arts to create a voice for the Asian American community in Los Angeles and nationwide. As the city and country have undergone unimaginable violence and turmoil, Great Leap has responded through participatory communal art projects. For example, in response to the 1992 L.A. Uprising, they began putting Asian, Black, Latin, and physically different artists on stage together to share first-person stories. The group has been collecting material for 43 years, and has just begun the process of assembling it. The Lab will work with Great Leap in a collaborative process through which they will create their own public archive. It is a conundrum that the same sound or piece of music can produce a range of effects. This conundrum prompted my inquiry into music not as a fixed object, but as a subjective activity. Music does not have a stable, singular meaning or effect. Restoration or destruction for one person can be something different for another, and music can even have different effects on the same person at different times. Western music theory would have us believe that a given sound’s nature and meaning are definitive. Factors such as material configuration — whether we listen to music through our phone’s speaker or in a concert hall — and memory — whether we associate, say, a tragic event with a “happy song” — prevent us from assigning fixed meanings to music and sound. This assignment of fixed meanings has produced real violence for people whose cultures and musics have been demoted in music history’s efforts to define quality.

While this concept may seem unrelated, it is still linked to cultural appropriation in that the Lab is always working to deconstruct the settler framework. Both sensorial and power-relational contexts, including cultural appropriation and racial oppression, contribute to a given sound’s effect on a given person at a given time. For example, the transduction of sound through air, water, or another material will determine the listener’s sensorial and affective experience. Furthermore, if, say, a melody has been appropriated and played within a colonial context where the composer has no agency in how their music has been taken and recontextualized, the effect of the music would be very different than if it had been experienced within a non-colonial, consensual context.

The Lab is not interested in plucking knowledge out of communities and putting it on display. We want to foster earnest and mutually beneficial relationships in order to learn from historically disparaged ways of knowing, and to work with community members to create their own autonomous archives and preserve communal memories on their terms…

How will The PEER Lab avoid its unconventional research methodology from developing a convention in itself over time, in the same way that each new era of music has broken with tradition but eventually become formalized and inaccessible?

Key to maintaining an experimental focus is constant evaluation of our collaborations. Do all of our participants have similar credentials and backgrounds? Are we involving collaborators from outside academia? Are we collaborating with others who challenge us to stay dynamic, agile, and ever-changing? As an example, one of most important collaborators is graphic designer and social justice activist Juliette Bellocq. We will come back to these questions again and again as we change and grow.

As to the other aspect of your question, conventions in themselves are not necessarily bad. Even when we disagree with them, they offer ways of understanding the world. To effect change, we must lay bare the ways conventions lock us in. We use what might be considered “unconventional research methodologies” in order to understand established methodologies’ blindspots. The conventions we wish to challenge, which currently hold power, are those that box in the senses. We want to establish new conventions that reflect and stimulate how we experience sound, music, and art.

For example, an ongoing writing workshop series seeks to develop new metaphors (or conventions) through intersensory play and experimentation. We write about music in terms of other senses, like taste and smell. This past winter, we held a series of workshops with a group of undergraduate students from multiple disciplines — many of them science and math majors — which involved “writing” across the senses. The months-long process was intimate and revealing because, in scrambling sensory conventions, we returned sensation to the body. This is the process of creating a new convention, one whose goal is to propose questions rather than seek answers. Considering the sound of worship as more than music in the ears, but also convulsions of the body, tears in the eyes, etc., what roles do larger epistemological frameworks like religion play in the multi-sensory languages of sound?

Religion as an institution is a highly sensorial and practice-based project; in that way, it definitely intersects with the Lab as a framework. Most religious practices use the senses, sound especially, as a means of control to achieve, in theory, a deeper and revelatory relationship with God or gods. Through the use of scent, light, and the engagement of the body in prayer, religion uses the senses in a very deliberate way. The sensory practice of religion locates the individual in relation to divinity.

Spirituality can of course be practiced outside a religion, for example through art practice and communion with nature. Friend of the Lab and sound artist Alba Triana, who is joining us for a “Pop Up Lab” event this September, spoke with us about her project “delirious fields.” The installation explores the dialogue between an element we can see, which manifests in our physical world, and something intangible but present and extremely powerful — in this case, electromagnetic fields. She describes her art practice as spiritual in part, in that it is a way to deepen her relationship with nature. The Lab does something similar in attempting to stimulate and capture the sometimes intangible relationships we have with our senses and with listening, which are also stimulated by frameworks such as institutional religion or music theory. What about today makes this research necessary for how music is studied and labeled, and is there/should there be space in applied music theory to approach music as a multi-sensory language?

This past year has seen an increase in projects that question Western domination of research and knowing. Some, like our project, are new, and some have been around for a long time. Right now, we are seeing an increasing awareness of traditions that existed before Western academia decided what “knowing is.” The PEER Lab does not stand alone, but is part of a larger cultural project. For example, Philip Ewell’s work proposes a New Music Theory which recenters curricula onto composers of color and traditions of pitch, rhythm, and meter from Asia, Africa, and the Middle East that predate the usual textbook starting point in Greece. Dylan Robinson, in his book Hungry Listening, describes Indigenous listening as a counter to the “whiteness of sound studies.” Jessica Bissett Perea’s book Sound Relations: Native Ways of Doing Music History in Alaska details the Indigenous performance practices of Alaska’s native communities, and connects them to Native Americans’ 21st century sensorial framework.

So, when asked “why here, why now,” we think about how the Lab (through what might feel like esoteric methods to some) seeks to answer very basic human questions. Creating pathways to deepen our relationships with each other and the world around us is a timeless quest; we are just one contemporary iteration. Questioning power structures and learning through practice that engages the senses and the body are not hypermodern concepts, either. They are just receiving more airtime right now.

These responses were written collaboratively with Charlie Stuip.