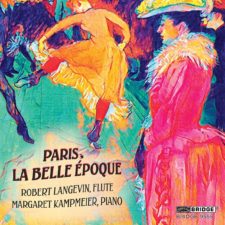 La Belle Époque encompasses a time period between the Franco-Prussian War (1870-71) and the outbreak of World War I (1914) when the French composers represented on this delightful release came into their own, writing works that largely were characterized by clear-cut and concise forms, textural transparency, melodic charm, and just about everything that was not thick, long-winded, and laden with philosophical baggage. In other words, not German!

If I seem to be concentrating on the compositions more than the performances, it’s simply because Robert Langevin’s extraordinary flute virtuosity bypasses the instrument in direct line to the music. His intonation is dead center, his phrasing and articulation abound with variety, and he employs vibrato with the utmost discretion and taste.

The easy elegance he brings to the Gaubert pieces makes these works sound like deep masterpieces rather than “flute fluff”. His prodigious breath control and sustained lightness of tone lifts Debussy’s Prelude to the Afternoon of a Faun from the forest to the clouds, in a manner of speaking. Langevin’s stellar rendition of Debussy’s unaccompanied Syrinx matches the fluid perfection of Doriot Anthony Dwyer’s reference DG recording, in contrast to Emmanuel Pahud’s affectionate lingering. Margaret Kampmeier’s alert and sensitive support is what you’d expect from one of the best collaborative pianists on Planet Earth. A must-have for flute fans and Francophiles alike.