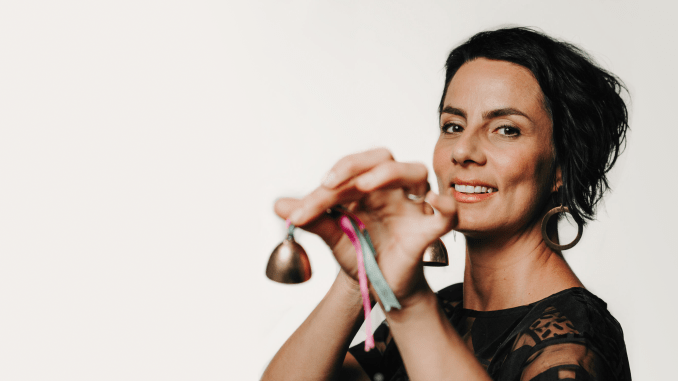 A digital future for the performing arts industry.

Diversity in the concert hall.

Choosing not to perform Mozart.

…could this interview get any more controversial?

Today we chat with Claire Edwardes — percussionist and artistic director of Ensemble Offspring. Claire is breaking new ground in the Australian arts industry through her fearless engagement in all of the above. She’s launched a new digital series called Offspring for All, which will share music by women and living composers through concerts that have been live streamed and will be available on demand.

Rhythms of Change is the breakout event, featuring music from the likes of Peggy Polias, Maria Grenfell, Anna Cawrse, Bree van Reyk, Ella Macens, and Elena Kats-Chernin. (We had to name them all for you because, seriously, how impressive is this list of Australian composers?)

Next up will be Blue Silence, in which harpist Emily Granger, Ensemble Offspring bass clarinettist Jason Noble, and Claire herself will play music from a bunch of living composers spanning Europe, the United States, and Australia.

So let’s revisit our introduction. Does change in concert programming and presentation really need to be a controversial topic? Or can there simply be — as this group would put it — an Offspring for All?

Claire, let’s talk Offspring for All. It’s a new digital series that involves great music being live streamed, then great music being available on demand. While this series may have started as a pandemic response, you’re insistent from the get-go that it’ll be ongoing. So I’ll launch in with the big question: is Australian music set for a digital future?

There has been a great deal of discussion within our industry of late about the future of online concerts after lockdown, when we can gradually get back to normal. Many of our colleagues don’t necessarily see a future in the digital realm, and there is certainly a sense of Zoom fatigue coming out of so much time online. I know I personally haven’t been partaking in as much lockdown art as last year, but that could also be because there has just been less content being created.

In any case, we are aware that Melbourne Digital Concert Hall for example still sees its role as an important one into the future, having just been successful with RISE funding for its next two years of activity, which is great. And indeed at Ensemble Offspring, we really want to foster audiences outside of the usual suspects — these are of course our valued regular attendees at our Sydney concerts — because it seems to us that this is how we will make more systemic change in terms of people’s appreciation of experimental and innovative art music outside of metropolitan centres.

We are definitely planning on travelling to the regions more since COVID too, now international travel won’t be the norm, so our digital outreach really goes hand in hand with developing audiences all over regional Australia. We definitely see a big future there.

Something that rings out to me about this series is that it helps music fit in with Australians’ daily lives. It’s creative, but it’s also practical. As you continue to be active in your career, through and despite the pandemic, how have you found the needs of audiences are changing?

Nothing will ever replace the live music experience, and indeed nothing should ever replace it. But I do agree that it doesn’t necessarily work for everyone to attend venues, whether they be traditional or not. So by creating a digital version of our highlight concerts, we give people outside of metro Sydney, or those who can’t physically get to concerts, the opportunity to immerse themselves in our music in the comfort of their home, on demand and when it suits.

For me, it makes absolutely zero sense to put barriers up between audiences and living new music, because there are already so many misconceptions about what it sounds like and what it is. By making our music really accessible for people and creating a situation where they feel safe — and they can even turn off the telly if they so desire — we hope that it will help build audiences’ appreciation of and passion for this strange thing I like to call living new music.

Speaking of new music, you are also incorporating the music of Australian composers in Offspring for All. I understand local programming is something you’ve always valued, and this series is no different.

Championing the music of Australian composers, often in an international context, is really what Ensemble Offspring is about. So yes of course, it’s also a big part of Offspring for All. Music by living Australian composers tells our stories and reflects the time in which we live — even in the Rhythms of Change concert, the work by Peggy Polias is about the COVID virus, and then Falling Embers by Ella Macens remembers the catastrophic fires of 2019-2020. These are relevant and lived experiences for all of us.

Of course, not all music needs to be literal, and it certainly hardly ever sounds literal. But all the same, at EO we believe that the arts have a big role in developing and celebrating our culture, which is why the voices must be diverse and not just from one subset of society — whether that be male, established, or blonde-haired.

I’d like to know more about that. For your Rhythms of Change project and event, you selected music from a particular segment of composers who are historically, and internationally, underrepresented in the arts industry: women.

Rhythms of Change is my latest project directly addressing equity in the representation of women in classical music, and specifically in the world of solo percussion music.

My project was triggered by the realisation that the majority of the pieces that I had been performing throughout my career were written by men. To re-address this gender disparity, for Rhythms of Change I commissioned seven of my favourite emerging and established female-identifying Australian composers to write new works for solo mallet percussion, funded by the Australia Council for the Arts.

As a commissioning and performance project, my Rhythms of Change initiative ensures that the next opus of Australian percussion music will be more fairly represented by women, so that the next generation of musicians can do what makes sense in our day and age – play music written equally by male and female composers.

The works are designed to be performed by a range of musicians – from high school to tertiary students, through to professionals — with the compositions made readily available for purchase through the Australian Music Centre.

My concept is to make all the resources highly accessible, and remove all barriers to accessing the scores and recordings.

This project seems to extend the idea behind your 2017 season with Ensemble Offspring, which featured only female composers. That was some years ago now, and while I’m a bit nervous to ask this, I’d like to know — do you think things are changing for the better?

Yes, I do believe things have changed quite a bit in the past five years. That said, the change is slow and will take more time and commitment still. It starts with consciousness, then quotas — through organisations signing up to initiatives like Keychange, for which I am the Australian ambassador — and then gradually we start to see the programming tables turn.

The latest Donne Women in Music ‘Equality and Diversity in Concert Halls’ report has some great examples of orchestras, particularly in the United Kingdom and United States, who are doing awesome things when it comes to diversity of voices in their programming. So there is definitely hope.

Australia is a little further behind, on the whole. Groups like mine champion living new music, so it’s a no-brainer for us to program with complete gender equity and diversity. But for orchestras, it’s a different road, which many of them are really starting to embrace and some are still in the dark about.

So how would you encourage other performing artists, and arts organisations, to balance the scales of concert programming?

I would urge all organisation to sign up to Keychange, as in my experience quotas can really help with initial and quick change. Then there is the development of consciousness around inclusion for First Nations artists, and this can be done through developing a RAP plan with Reconciliation Australia. That said, after years of trying to develop a RAP while walking the walk in relation to support of First Nations artists, at Ensemble Offspring we have decided that for a small organisation like ours, we are better off creating our own reconciliation document with KPIs around our First Nations activity.

Likewise, Arts Access Australia has a lot of great programs that we are just starting to get into more and embrace with implementation of change in our systems of doing things.

All of this takes time and commitment, but eventually we will see that concert programming will start to reflect our diverse peoples and stories more and more.

To conclude with a final question about diversifying concert programs — and I know this in particular is going to be a touchy question — you’ve programmed living composers into this series instead of dead ones (Mozart, please forgive me). Blue Silence is full of living composers. Why do you value music that is alive?

Ensemble Offspring champions living new music, so we would never program Mozart anyway. I do often feel like groups who are able to program older Western art music, as well as new commissions, do have it easier in terms of the marketing sell. But that’s not us, and it never will be. So instead, we embrace the challenge of communicating to potential audiences all the awesomeness and variety in this diverse new music by living composers.

For me, it is the excitement of experiencing new music where I might just hear something I have never experienced before. Personally, I’m not interested in a new interpretation of an older work that’s been played a million times before, although so many people do this so well of course.

It’s about a living, breathing culture that is alive and kicking — and our music must reflect this!

Ensemble Offspring launches its new digital series Offspring for All on 24 September with the event Rhythms of Change, followed by Blue Silence on 8 October. Events will then be available to stream on the Ensemble Offspring website.