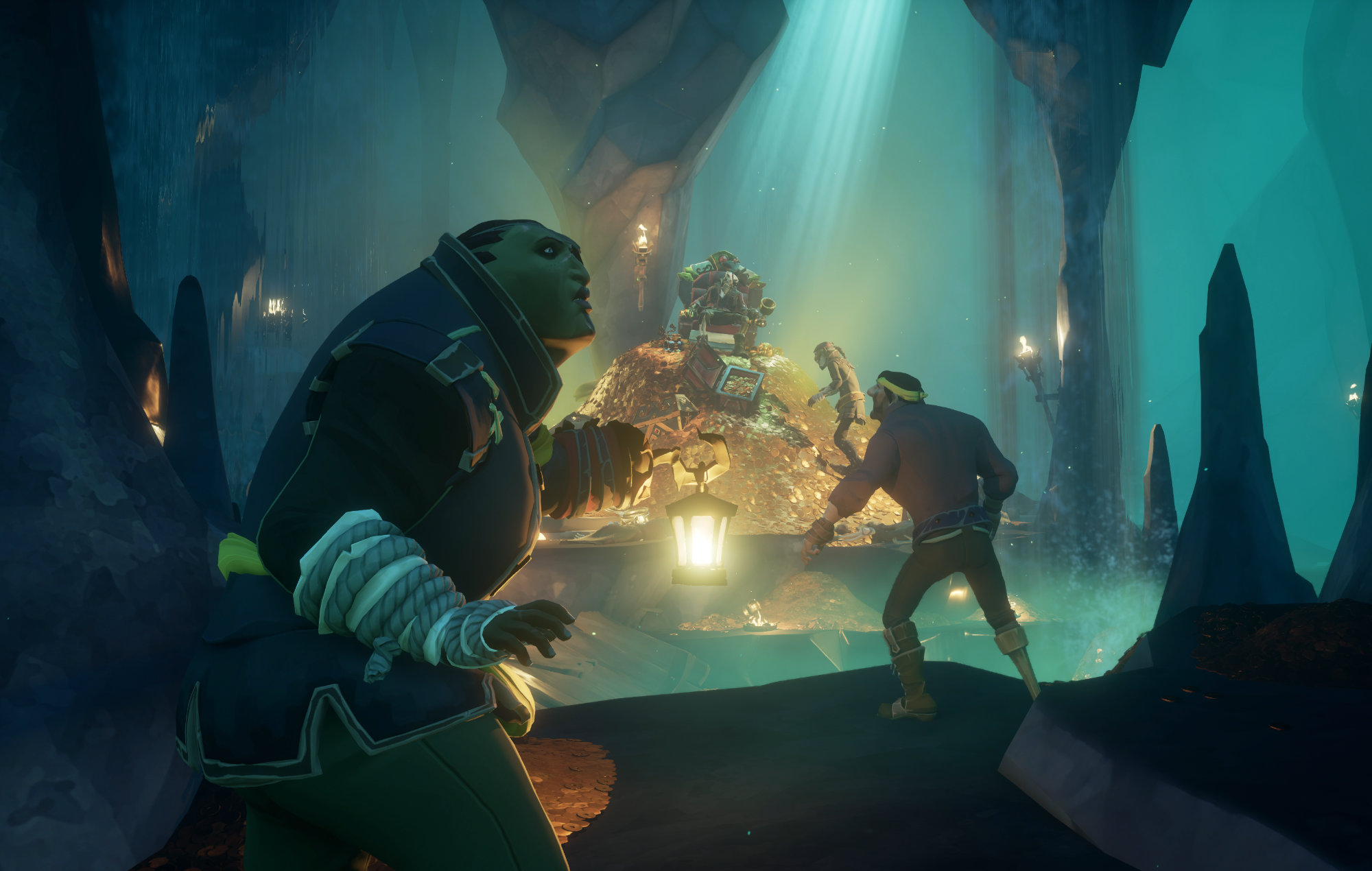 Sea of Thievesis a game of stories. Veteran British game studio Rare has turned its pirate adventure game into a sandbox of limitless tales. For over three years these stories have revolved around Sea of Thieves’ evolving in-game lore, but now a new kind of story is entering the fray with the recent reveal at the E3 Xbox Bethesda showcase. Sea of Thieves’ A Pirate’s Life downloadable content (DLC) will bring beloved Disney character, pirate Jack Sparrow into the world of Sea of Thieves in a brand-new, original story adventure.

NME recently got a chance to spend some time chatting with Joe Neate, executive producer on Sea of Thieves, the game’s creative director Mike Chapman and Luigi Priore, the VP of Disney & Pixar Games about the upcoming A Pirate’s Life update.

But how does the team go from the kernel of an idea to bring an iconic character like Jack Sparrow into Sea of Thieves, and how do you go about approaching Disney with the idea?

“This all started back at E3 2019 where Mike and I suggested to the team at Disney that we talk about bringing the two worlds together,” said Neate. “At the heart of it, we feel there is a cultural alignment between the values we hold dear at Rare and those of Disney, so it feels like a logical fit.

“This was all achieved with three meetings with Disney. We met the team in LA to discuss our initial plans. We were invited to visit the ride in Disneyland, where Mike and I got to ride it twice in a row, and then in August 2019 Disney visited our studios here in the UK to discuss further. The agreement was reached in January 2020 after we did our final pitch, and we’ve been working on it ever since.”

“The real key for me was ensuring that we tell the right story,” said Chapman. “Myself and others in the team are huge fans of Disney and of this character in particular, so it was really important that we got this right. After the first initial meeting, Joe and I waited until we were out of view and put our arms around each other and, incredulously, asked if we were really going to do this? There was a sense that we were really going to create something special.

Priore had more to add: “We at Disney are always keen to work with the “best in class”, and the team at Rare is just that. We are all fans of Sea of Thieves, and the quality and attention to detail as well as the understanding of these two worlds and IPs that the team, and especially Mike brings, made this a logical choice. In fact, after the initial meeting we turned to each other and asked if Mike had ever worked at Disney as he had such an encyclopedic knowledge of not just this character, but of the ride in our theme park and Disney as a whole. It made us really excited to work with them.

Key to the relationship has been a keen understanding of both the world of Sea of Thieves and that of Jack Sparrow and the Pirates of the Caribbean. Underpinning all of this is Mike’s infectious enthusiasm for all things Disney and in particular the theme park ride. I asked what A Pirates Life means in the context of this crossover.

“The “Pirates Life” was our starting point really. We began all this by asking what is the pirate’s life in Sea of Thieves?” Chapman says, continuing: “What does that look like? Then we asked what does it mean to be a pirate in the world of Pirates of the Caribbean? Across both worlds, the answer is “freedom”, the freedom to have an adventure, and the freedom that a ship with the wind in its sails grants.”

“The world of Sea of Thieves is an eternal world where that life of freedom and adventure and the “Golden Age of Piracy” never dies. This is a world that Jack Sparrow would thrive in.

“There are a lot of parallels between our two worlds. In the Sea of Thieves the Ferryman oversees the pirates within in it, providing the gateway for them to return to the world via the Ferry of the Damned, and in Pirates of the Caribbean Davy Jones has a similar role where he looks after the pirates lost at sea in return for their allegiance aboard The Flying Dutchman. In our story, Davy Jones follows Jack into the Sea of Thieves, but here he has no dominion and we were excited to see what that looks like.”

Sea of Thieves has a very specific visual style, and I asked Mike what the challenges were to bring a character who has such an iconic and recognisable look into the world of Sea of Thieves and ensure that it fits with that visual identity.

“We really agonised over Jack Sparrow,” explains Chapman. “We knew that we had to get it right, and that he had to fit into the world. We ended up in quite a feedback loop of ensuring that the proportions were right and in keeping with our other characters, but also that he was quite recognisably Jack.

“We were really fortunate to have Simon Newton, the stunt double for Jack in the fourth, movie come to our studios and spend a day with us. He came in full costume and really helped us narrow down the movements of the character. He was so knowledgeable about the character, providing insight to how Jack would celebrate, how he would stand when not really moving, and even down to specific facial movements. We really think we have captured the essence of Jack Sparrow as a character.”

This past year has been difficult for everyone with the global Covid-19 pandemic. With the final agreement only being reached in January of last year, I wanted to know what challenges this project had for a team working entirely from home.

“After the final pitch was agreed back in January 2020, we started work immediately,” said Neate. “Shortly after that the global pandemic hit, which was obviously a huge blow, but everybody in the team realised what an enormous creative opportunity this was.

“Passion has been the wind in our sails really, there is so much love and passion in the team for what we have created with Sea of Thieves. Right from the start we knew what story we wanted to tell, and the team has been incredible, working together to bring this to life. Collaboration really is, and has been at the heart of what it means to work at Rare, and that spirit has carried us forward.”

“Our relationship has been one of trust with an open and honest relationship,” says Priore. “And here at Disney, our job has been supporting the team at Rare to bring their creative vision to life.

“Obviously, with the natural distance between the teams, with us here on the west coast of America and Rare there in the UK there is always an element of remote work. But, it got to the point that we were looking forward to updates from the team, the concept art, the story boards, audio and music. We’d look out for moments where people were laughing, and there would be a moment where we would look around at each other and say “we all love this, right?”

I was running out of time, so as a final question I asked what every Sea of Thieves fan wants to know after seeing the latest cinematic trailer. Is the little crab character, which has featured in every trailer Rare has produced, now finally confirmed as a pet?

Chapman had an altogether more horrifying answer. “I am going to let you in on a little anecdote I haven’t told anyone else. Originally, I wanted the Castaway, who will feature at every outpost in the Sea of Thieves at the start of your journey with A Pirates Life, to pick up a conch shell, out of which “Shelly” [as she is affectionately known in the Sea of Thieves community] would drop out. I wanted Calypso to pick up Shelly and eat her, then produce a black pearl. But after pitching this to the team they were too horrified and upset so I decided to scrap that idea.

“Of all of the stories that take place within the Sea of Thieves, Mike’s plan for “Shelly” is perhaps a tale too far. Although he might be a monster, I can’t wait to play A Pirate’s Life on June 22.”

Sea of Thieves is out now for the Xbox One and the Xbox Series X. A Pirate’s Life will be available as a free update on June 22.