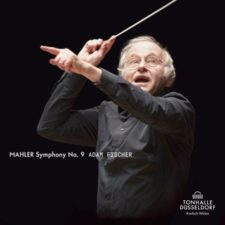 What are these people doing playing Mahler? Yes, it’s nice that the Düsseldorfers can do it accurately, if not alluringly, and Fischer does have some ideas about the music (mostly bad ones), but that’s no excuse to produce yet another version of this music in such a crowded field. The first movement flows swiftly–indeed hastily–with anemic strings and little atmosphere. Fischer isn’t wrong to move things along. The orchestra likely would have problems sustaining a broader tempo, but the musical expression inevitably suffers, especially at the climaxes.

The first scherzo is a total mess, with Fischer’s random tempo adjustments in just about every phrase ruining Mahler’s carefully worked-out scheme of contrasts. The Rondo: Burleske, as in so many second-rate performances, probably got the most rehearsals, and has plenty of speed but not much malice. Its closing pages find Fischer doing a Bernstein, with sudden ritards at the brass refrains, only less convincingly, ending in a blur. As for the finale, those less than fulsome strings singularly fail to impress. It’s just boring. In short, this is a wholly unnecessary release, and as the old saying goes, if it looks like a duck and quacks like a duck, it’s a duck. No surprises here. Avoid it.