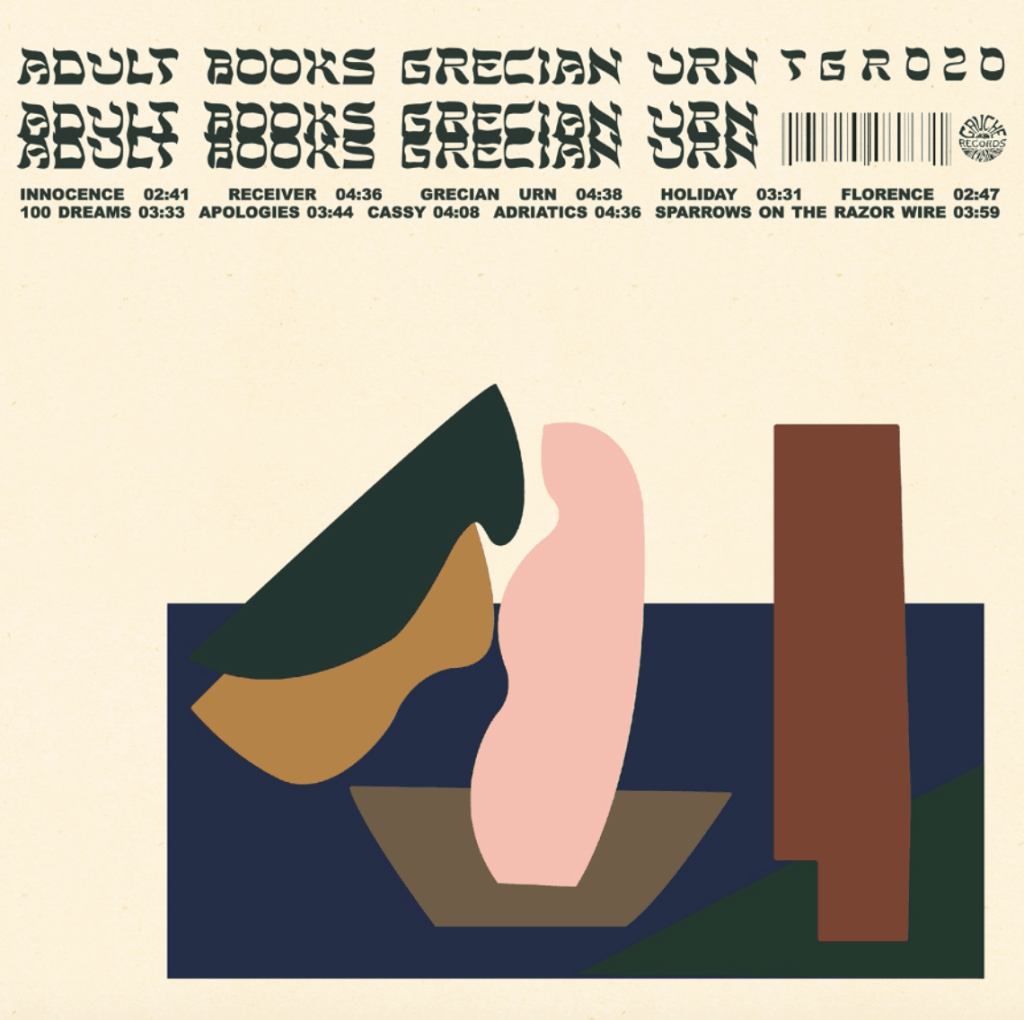 Classic post-punk gets an infusion of rock dreaminess on Grecian Urn, the sophomore album from L.A.’s Adult Books.  Recently released through Taxi Guache Records, it explores a new sonic direction for the band, departing from the more raucous, raw punk riffs of their first release, Running From the Blows. The trio, consisting of frontman Nick Winfrey, drummer Sina Salessi, and guitar/synth player Alex Galindo, explores Winfrey’s introspection on his past and the challenges he faces living with anxiety.

Post-punk is rooted in the idea of artist exploration.  In its earliest days, the movement challenged whether the anti-establishment punk movement had sold out—a mutiny within a musical revolution. Keeping with this tradition, Grecian Urn employs soundscapes that blend traditional punk influences with big electronic elements, a hint of buoyant surf punk, and an airy indie pop rock tranquility.

The most traditional post-punk offerings on the album are easily “Holiday” and “Apologies,” with both tracks conjuring references to sounds of The Cure.  Winfrey highlights the matter-of-fact lyrical delivery that we expect in punk-inspired vocals, while the music provides up-tempo, head-nodding rhythms.  These elements also appear on opener, “Innocence.” However, this track is all about vocal hooks and big, repeating guitar riffs, making it the singalong anthem of the record.  Title track, “Grecian Urn,” is a gorgeous, electronic-powered rock song with a powerful drumbeat.  Like many of the tracks on the album, it features splashes of spacy-meets-jangly guitar that would comfortably feel at home on a Johnny Marr record.

On first listen, it felt like Grecian Urn could benefit from the addition of a hard-driving track that just feels like the band let loose with all their rock energy.  However, upon further reflection, such a song would likely feel out of place.  The record presents as a complete, intentional thought that almost feels like a concept album in its flow.

The band wonderfully taps into enough classic post-punk to win over the traditionalists of the genre, while adding plenty of rock elements to appeal to a more universal crowd.  With Grecian Urn, Adult Books gives us a record that’s brooding yet unoppressive in its angst.