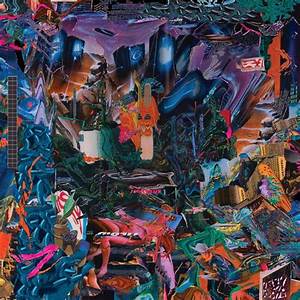 The UK post-rock band are back with their sophomore LP Cavalcade. black midi’s debut was a guitar-heavy and explosive first record, toying with the genre of post-rock and pushing each instrument to create its own sound. However, on Cavalcade, the band is pushing this even further, creating a sound that is chaotic, difficult to distinguish and digest. Yet for black midi, it makes total and complete sense.

Opening track, “John L” is a prime example of the complexity of black midi’s songwriting. Including more instruments or at least more effects to the sound, the riffs sway back and forth like a saw going through a heavy piece of wood. The bass sound is almost humid in how it engulfs the background of the track, with the drums supporting but also adding another layer to texture to the already layered track. As the vocals get introduced, they create a narrative of this “John Fifty” figure and the surrounding landscape for his arrival into town. The vocal delivery is rumbly while the reverb on it creates a story-telling effect, as if the vocals are being told to a group of historians. The track breaks at multiple points with just bursts of sound breaking every few seconds to add new instrumentals with each chorus or verse. Vicious with each note, the track emulates the tides after a rough storm: picking up with force and then crashing down with precision.

The following track, “Marlene Dietrich” is an odd deviation from the previous explosion in “John L.” Primarily focused on vocals and lyrics, the instrumentals flow more into each other. They’re more complimentary to the story telling going on in the lyrics, truly paying homage to the great Marlene Dietrich and her performance aesthetic. The vocal delivery is eerie and conquers the essence of telling stories of the greats at an old nightclub, really switching the sound and delivery rapidly in the album.

Other tracks such as “Chondromalacia Patella” and “Hogwash and Balderdash” showcase how well black midi can infuse all different types of instrumentals while not muddying the sound, keeping each instrument intact and bright while also complicating the rhythmic structure and patterns of the tracks. The vocal delivery is constantly changing with the tempo and acting as its own instrument. Acting both as a constant narrator or commentator in reaction to the songwriting and its chaotic structure. At times the record harks back to some of the riffs that were introduced in “John L” which ties things together quite nicely. Black midi do an excellent job of creating something that teeters between noise rock and post-rock while catering to exploring their sound further. “Diamond Stuff” is an excellent example of that, more peeled back in its lack of instrumentals yet it exudes exploration and definition, confidence of what their sound is and deliberate in how it should be delivered. Black midi continue to impress and dazzle with their unique approach to songwriting and absolute chaos.