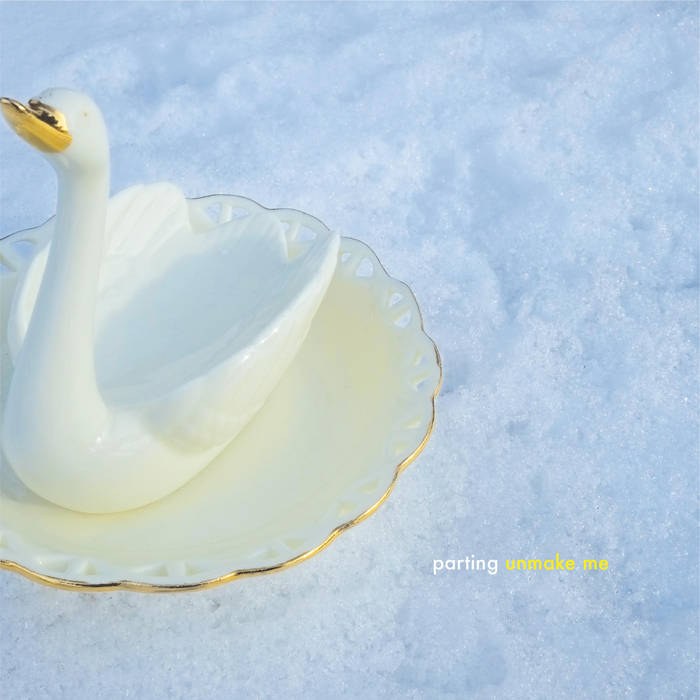 On Unmake Me, emo band Parting concern themselves with constructing something new from familiar pieces. “The same can be different in some weird kinda way,” Keith Latinen and Ben Hendricks harmonize on “Living Proof.” Across the six songs on their debut release, the band continually returns to this question, whether it’s in the context of terrible day jobs (“Knowing you need to change is easier than making changes”) or facing inner demons (“I gave them new names! I reclaimed myself!”). These songs ask how we might transform ourselves gradually, day in and day out, without forsaking our hearts entirely.

In the context of the band’s history, this theme makes perfect sense. Parting, who describe themselves as an “emo-revivalist supergroup” is composed of members of a few key emo bands of the early 2010s—Latinen (Empire! Empire!), Hendricks (Annabel), Gooey Fame (Dowsing), and John Guynn (Hawk & Son). On Unmake Me, the band doesn’t shy away from the defining sounds of that era. Spindly and lightly mathy guitars keep the release sprightly and energetic; a healthy mix of the hyper-specific and the universal keeps the lyrics intimate and engaging; a deft instinct of melody and catharsis gives the songs a surprising vitality. Parting’s sound draws on all of the aesthetics of the members’ former bands, but most significantly from Latinen’s Empire! Empire! (I Was a Lonely Estate)—a probably inescapable truth given his distinctive high-pitched vocal style. Still, the songs on Unmake Me are far more pop-forward and to-the-point than anything on You Will Eventually Be Forgotten or What It Takes to Move Forward.

And therein lies their originality. Like Empire! Empire!’s best work, Unmake Me opener “Jesse Eisenbird” plays out like a miniature short story—this one mostly about grief and loss. But unlike Latinen’s old band, “Jesse Eisenbird” boasts a new sense of bombast and energy. Here, the guitars plateau and burst like bold cannonballs into warm swimming pools. The cymbals crash and ripple while the bass rises above the surface with a notable flair. The lyrics, while never repeated, linger and float on after the song is over.

Songs like “Ratt Michards” and “After the Fact” fall in line with this style, which leans more Get Up Kids than Mineral, and this punchier approach (which is likely owed in part to the punk leanings of Gooey Fame’s work with Dowsing) proves to be a great fit for the band. But the gentler songs also refrain from feeling like anyone is repeating the past. Standout “Stapler’s Monster” builds gracefully to a starry, emotional peak as the lyrics progress from situational and small (“my dog is nestled in the folds of my legs”) to sweeping and large in scope (“when dawn breaks, the world wakes up from dreaming”).

It’s the aforementioned “Living Proof,” however, that shows the four collaborators working most effectively in sync. Here, Hendricks and Latinen lend their vocals first in matching harmony and then in complementary back-and-forth. “I’m living proof / of carrying through,” they sing in the song’s swooning and catchy finale, a testament to transforming together while maintaining the truth of everything they always stood for. On “Living Proof,” four musicians who made their career on heart-wrenching moments stick a perfect landing, who would have thought?