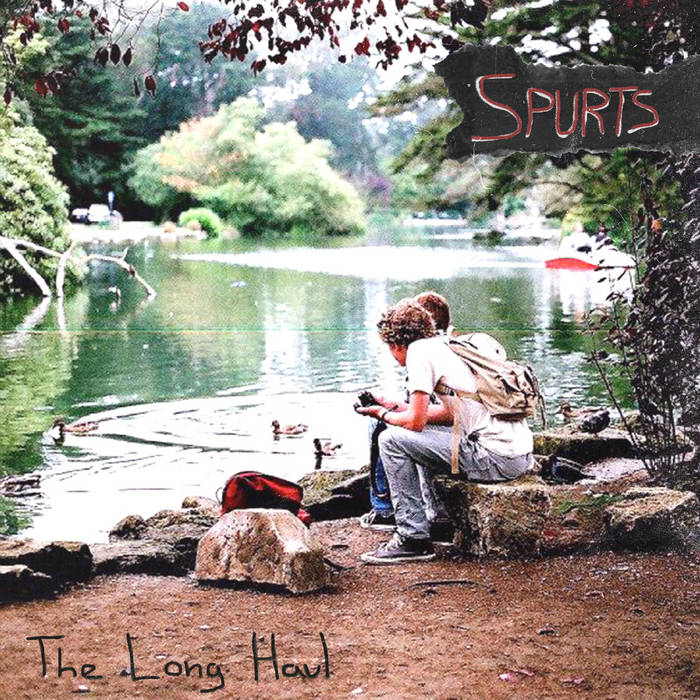 Spurts kick off their debut album, The Long Haul, with songwriter Robert Sanlis strumming an acoustic guitar in a pattern reminiscent of a loose “Two Headed Boy, declaring,” “I’m convinced we’re on for The Long Haul.” An album of lo-fi, bedroom indie rock recorded during a pandemic could easily dwell too excessively on the current moment, but thankfully Sanlis and the surrounding crew of musicians hit the more universal emotions brought about by isolation and the album does not feel rooted in 2020, or like a “pandemic record.” Instead, it’s an intriguing collection of bedroom indie, sprinkled with trumpet, keys, and the occasional heavy riff.

Clocking in at a little under 30 minutes, the album features shorter tracks for the style which never overstay their welcome. The group does not stretch past the four-minute mark until the final two songs, adding a little extra weight to those extended riffs and jams, as they stand out as unique from the preceding songs on the record.

“Track 01” is followed by “Bad Blood”—an Oso Oso-like shuffle with horns—and “Slightly Hungover,” a gently strummed tune that explodes into the album’s first heavy moment. Again, the roaring guitar solo (perhaps representing the more debilitating effects of the hangover kicking in) doesn’t last too long as it builds in intensity and then abruptly drops, leading into the delicate acoustic waltz of “Sarah’s House.”

“Scrap” alternates between ska upstrokes and garage punk as Sanlis delivers lines like “did the mountains fail me? / I wasn’t inspired.” It’s a turn that shouldn’t really work in the middle of this record, but does. It’s followed by “Interlude,” with the pair of songs forming somewhat of a bridge between the first and second halves of the record. “Interlude” is a light and bouncy fingerpicked tune with keys anticipating the shift into “Things Could Be Better.”

The use of electronic instruments as the main vehicle, and the poppy synth lines help “Things Could Be Better” stand out as one of the catchier tracks on the album. It also holds some of the stronger lyrics like “I’ve had a healthy dose of “I told you so’s” / And “Should have known better, I guess” / And I’ve earned every one / With the things that I’ve done tonight.” The album continues its strong finish with “i was in a band in college,” featuring the refrain “Been treating art like a contest / Been thinking things that you probably regret / So why you so surprised / That you’re not having fun yet?” But the real knife-twisting lyric comes near the end of the track with “Cuz there were more pedals on stage then people in the audience anyways.”

“Angela” closes the record out with a swaying guitar loop, giving the song a strong feeling of forward momentum, pushing to the album’s most intense moment that then fades into a gentle tapping pattern, bringing the record to a delicate and appropriate end.

Despite being born out of a year of isolation, The Long Haul has a distinctly communal feel to it, as Sanlis surrounds himself with a group of musicians to add color to the tracks. This vibe, combined with the lofi recording style makes for a record that doesn’t necessarily sound like Bright Eyes, but feels like Bright Eyes, further bolstered by the specific and personal lyrics that simultaneously express more collective truths and emotions.