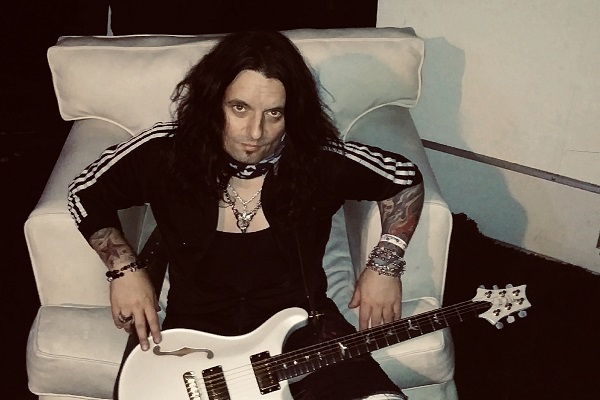 Alex Grossi of Quiet Riot and H&B joins Anne Erickson to talk about new music, getting the stamp of approval from Ice-T and more in this extensive interview

Grossi, who also plays guitar in ’80s glam metal band Quiet Riot, joined Anne Erickson of Audio Ink Radio to discuss the new album, what it felt like getting props from rapper Ice-T, plus catch up on all things Quiet Riot. Watch the full interview via the YouTube player below, and subscribe to Audio Ink Radio on YouTube here.

On fans’ reactions to the band’s first full-length album

It’s been pretty overwhelming. It’s been so long because of the pandemic that I’d forgotten about some of the tracks and got a lot of fan mail about it. Ice-T actually heard the version of the Body Count cover we did and gave it the thumbs up, which is cool. It’s been great. All positive. To be honest, and I’m not being arrogant here, but I’m not surprised, because we put a lot of time and money and blood, sweat and tears into it. It’s not something we just threw together. I think it’s it is a great sounding record, and I’m glad people are digging it and get it.

No- honestly, not really. A lot of the songs we had played live in our set forever. But, probably “No Quarter,” but Frankie (Banali) came in and nailed it. But, we went through the list of songs pretty intensely with a fine-toothed comb and picked the right ones. “Ziggy Stardust” we played at literally every show we’ve ever done, so we knew that would work. The Beastie Boys one was kind of weird, because the original version is just a drum machine and guitars. It’s really simple and cave man-like in a good way, and we tried to play it like a band, and it sounds different when you play it with with a drummer with an actual swing to it. We had Dizzy’s wife sing it, so that’s kind of a different approach, too.

On the upcoming Quiet Riot album

We’re working on it right now. You’ll have to stay tuned. Frankie (Banali) left behind a bunch of drum tracks that we’re working on, and there were a lot of half songs that were in the works when he was alive, so he’s going to be on it, obviously. So far, so good. We’re taking our time with it. We’re not going to rush it. We’re just getting back out there. Coming out of the pandemic and all the changes and everything, we’re just taking our time…. It’s all him. I’ve got tons of (Frankie’s) drum tracks to work with. He left behind a lot.

He’s still there. It’s different, but it’s almost not, because he has such a distinct style and sound. Things have shifted, but we want to keep it true to the brand. When someone passes away, what they built is still there. You just continue the legacy as is. You don’t want to reinvent the wheel. If it ain’t broke, don’t try to fix it.

On going forward with Quiet Riot without Frankie Banali

The fact that it’s still standing up on its own goes to show the strength of the brand and the songs that he helped create. That’s a big testimony. It’s a legacy. It’s not just a flash in the pan thing. Heavy metal and hard rock has been written off a million times, but this music isn’t going anywhere. I just read that David Coverdale basically replaced himself in Whitesnake. They hired a new singer to go on the farewell tour. You don’t think after that tour, Coverdale is going to retire and keep Whitesnake out there? Of course he is. This is where it’s headed, because people still want to hear those songs.

If you look at the attendance at some of the big rock festivals, yeah. I think the fact you have bands like Guns N’ Roses going out and selling out football stadiums in 2021 is a testament to the strength of the music. They haven’t put out new music in a while, but the catalog and the legacy. I don’t think it’s going anywhere. People are always going to want to hear those songs, and it’s going to always evolve into different genres and subgenres, but the whole metal thing – the attitudes and the origins of Led Zeppelin and Black Sabbath – that’s going to be around forever.