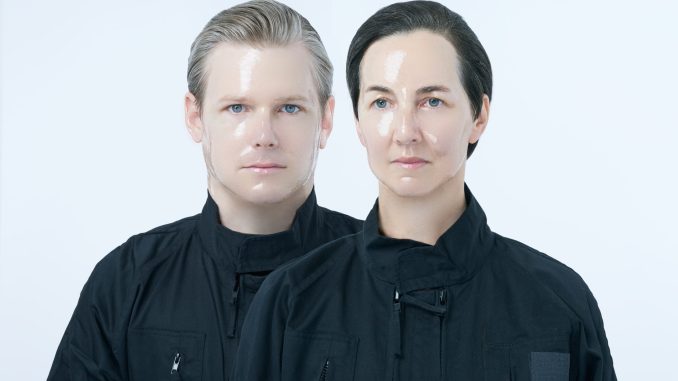 Alisdair Macindoe was the sort of kid who would grab a device and rip it apart. Electronic and musical instruments weren’t safe in his hands — he’d deconstruct them, look at what was inside, then try to build his own.

This Melbourne composer, dance maker, and instrument designer never grew out of this habit, and his latest technological system is embedded in SYSTEM_ERROR. It’s a hybrid work in which Alisdair’s instrument — a complex live mixing circuit made from electrically conductive tape — is used to create new soundscapes.

In this interview, Alisdair tells us what inspires him to create new ways of making music, and his SYSTEM_ERROR instrument — produced in collaboration with Chamber Made artisic director and performance-maker Tamara Saulwick (pictured with Alisdair above).

Alisdair, great to chat about SYSTEM_ERROR. I hear this isn’t the first time you’ve invented a musical instrument: you used to rip things apart as a kid?

SYSTEM_ERROR continues my interest in designing and creating new systems for musical and performative expression.

Since childhood, I have had this fascination with electronics and computers, and how interfacing with them sort of poses this possibility to transport a part of yourself into a different plane. I would spend hours tearing apart electronic toys to repurpose them and redesign their use. It felt like there was this magical power behind electronics that I could find and harness if I just kept exploring.

I think I just got hooked on the exploration part — the endless and expansive creative possibility that electronics and computers present.

I had a stepdad at one stage who was a composer and percussionist, and he had this program for writing music. I was really young, 6 or 7 years old, and I just loved making music with it. I would create what I now know is a genre called black midi, where I would add so many notes to the stave that the manuscript looked almost black, and then listen back to this wall of musical noise. I found it absolutely thrilling. It was like this musical representation of the mood in which I had sat down; like a digital mirror of sound looking back at me from inside the computer.

I find my self in awe of current technology, which is not as common as I think it should be. The machines we take for granted now are absolute marvels that generate miracles for us on a daily basis. Growing up in the ’80s, I can remember fantasizing about creating devices that we would now consider urban necessities.

Still, there comes a point for every device-destroyer when they must walk away from ruining all objects in their path, or must embrace it as a fact of life. When did you realise you wanted to build a career out of this activity?

I may have worked in this field for a while, but I have never really felt like I was building a career. I am only ever really just building a thing or idea, and when I stop wanting to do that then I guess I will stop.

I think doing it professionally is partly a practicality, and partly to do with my other career — working in dance. Dance has always been my career goal, from the age of 5, and I only became a professional sound designer because dancer friends would ask me to create sound design for their works.

So let’s talk about your creation for SYSTEM_ERROR? What exactly is this device, and how does it work?

‘The device’ is a large multichannel touch sensor, that measures skin resistance the same way the finger sensor works in a lie detector machine. These measurements are used to control myriad digital instruments housed in a computer.

The touch sensor consists of hundreds of meters of aluminium tape stuck to the ground in a circuitboard-like configuration. The tape is connected via cables to a USB device that is connected to the computer. It is akin to a pressure sensor when played, and we articulate musical ideas by touching the tape in various ways.

The channels often have crossover too, so touching several at a time can create really complex ideas with only a few points of touch.

What’s this experience from the audience’s perspective?

It is sort of like zooming into a computer where you can see how it works as it is being played.

But the show is more than a display of the technology. It is a performance work that opens up thoughts and ideas around sentience, the fragility of the human mind, trans-humanism, and perceptions of lifehood and identity in the computer age.

So the instrument itself only tells part of the story. What else does your technology represent?

We are both literally and figuratively touching and affecting a live circuit to create the music for the show. Our bodies are electronically part of the system, and I think that in itself brings up all sorts of interesting questions.

The relationship with the instrument develops over the piece, and there are many different ways in which we play it.

Why do you like the idea of combining different creative mediums in the scope of a performance?

I have always found it hard to stick in one creative lane. I think it might be that I am often driven by an abstract.

How do you feel technology is going to influence the future of artists in Australia?

Working with electronics and technology creatively is becoming more and more accessible, and I think that is a good thing. Technology development should not just be left to big tech and corporate entities, it should be a shared language that anybody who is interested can explore.

SYSTEM_ERROR by Chamber Made is showing at Arts House, North Melbourne Town Hall until 11 July.

If you like, you can shout Steph a coffee for volunteering her time for Australian arts journalism. No amount too much or little 🙂