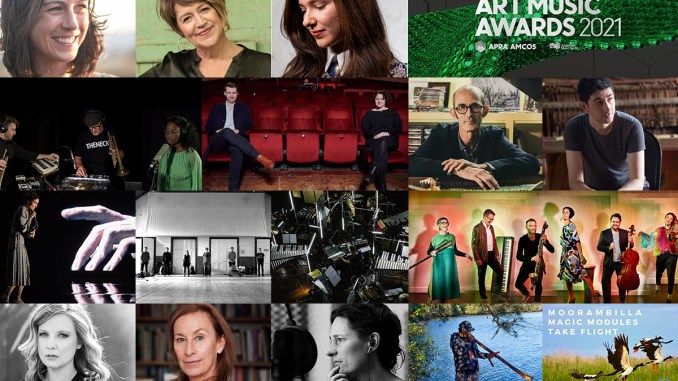 We’re so proud to announce that CutCommon’s founding editor was recognised in this year’s Luminary Awards! Thank you for reading our stories from the Australian arts industry.

The winners of the 2021 Art Music Awards have been announced, including some of Australia’s finest established and emerging artists excelling in their fields, and with women composers, experimentalists, sound artists and improvisers leading the way.

“APRA AMCOS and the Australian Music Centre are proud to celebrate the ingenuity and dedication of this year’s finalists at a time of change and disruption – and in some ways also a time of opportunity – in the performing arts landscape,” said Dean Ormston, APRA AMCOS Chief Executive and Marshall McGuire, Chair of the AMC’s Board of Directors.

“While we are disappointed to have not had the chance to celebrate with you all in person, we remain committed to advocating on behalf of music creators, organisations and arts workers. Our planned virtual program was to have been a unique showcase of Australian art music, and we look forward to acknowledging your incredible work in person in 2022.”

The winners of the 2021 Art Music Awards show us the brave new future for art music, emerging over the many months of the pandemic. Transcending time and place was once the utopian goal of a creative musician – now it is a practical challenge to overcome, and in 2020, this was done in countless innovative ways.

The 2021 Art Music Award for Excellence in Experimental Music was presented to Listening in the Wild by Leah Barclay, Lyndon Davis and Tricia King – a project with a strong collaborative connection with the Indigenous community and featuring stories by the Kabi Kabi people of South-Eastern Queensland. “There are no projects more exciting and necessary in Australia at this time,” commented the Awards panel.

The winner of the Work of the Year: Electroacoustic/Sound Art, Closed Beginnings by Tariro Mavondo, Reuben Lewis and Peter Knight, was converted from a live project to a virtual one in the first days of the long Victorian lockdown in 2020. This however did not diminish the skillful bringing together of electronic textures, spoken word and instrumental performance of this ingenious project.

Work of the Year: Dramatic went to Erik Griswold’s Dragon Ladies Won’t Weep, a Chamber Made and & CultureLink Singapore co-production with a wonderful concept, engaging composition and ever-present humour.

Work of the Year: Large Ensemble was awarded to Cathy Milliken’s work Piece 43 for Now,inspired by Shakespeare’s Sonnet 43 and referencing the gunshots that paralysed Jacob Blake in Wisconsin in August 2020. According to the Awards panel, this music, premiered online by the German SWR Symphony Orchestra, is among the best work written by this mature composer.

The Work of the Year: Jazz attracted a large field of very competitive nominations this year. The winner, Vanessa Perica’s Spaccanapoli, is a bold and exciting work for large jazz ensemble that brings alive the cacophony and buzz of the historic main street of Naples.

South Australian composer Anne Cawrse’s string quartet A Room of Her Own, commissioned and premiered by the Australian String Quartet, emerged as the winner of the Work of the Year: Chamber. “A confident, assured, and luminous string quartet,’ commented the judging panel.

Work of the Year: Choral category saw many innovative compositions realised in unusual conditions. The winning work, Lisa Young’s Sacred Stepping Stones, conveys a powerful environmental message – it is also a rarity among nominations in that it was premiered to a live audience by a large number of young choristers during Gondwana’s 2020 Festival of Summer Voices.

In music education, 2020 had numerous organisations adapt quickly to changing circumstances. Moorambilla Voices was presented the Award for Excellence in Music Education for their Magic Modules – an incredible program reaching out to children in regional and remote NSW, making curriculum-based materials easily accessible online.

Performance of the Year: Jazz/Improvised Music went to Phonetic Orchestra for Silent Towns – an awe-inspiring achievement by emerging leaders in improvised music, and an example of how music can provide a meaningful connection during a time of extreme isolation.

Performance of the Year: Notated Music was presented to one of four ‘Breaking Glass’ operas by the Sydney Chamber Opera: Peggy Polias’s Commute was premiered online in April 2020, conducted by Jack Symonds, directed by Clemence Williams, with Jessica O’Donoghue as soloist.

Founding producers of ABC Radio National’s iconic program The Music Show, Penny Lomax and Maureen Cooney, are the recipients of the Richard Gill Award for Distinguished Services to Australian Music for 2021, and will be celebrated at the Art Music Awards ceremony in 2022.

APRA AMCOS and the AMC congratulate all the 2021 Art Music Awards winners on their outstanding achievements.

Work of the Year- Choral

Work of the Year- Dramatic

Work of the Year – Jazz

Work of the Year – Large Ensemble

Work of the Year- Chamber Music

Work of the Year- Electroacoustic/Sound Art

Performance of the Year – Jazz/Improvised Music

Performance of the Year – Notated Composition

Award for Excellence in Music Education

Award for Excellence in Experimental Music

NSW: Ensemble Offspring for consistently high-quality performances, breadth of repertoire, and commitment to collaboration for 25 years

QLD: Alex Raineri for commitment to the creation and performance of Australian contemporary music in the Brisbane Music Festival

SA: Anne Cawrse for sustained contribution to the new music culture of Adelaide through composition and education.

TASMANIA: Stephanie Eslake as founding editor of CutCommon, providing a voice to emerging composers and performers.