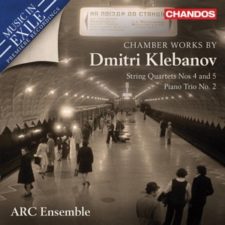 Dmitri Klebanov (1907-87) was a composer of seriousness and substance, as the few discs devoted to him available thus far (most spectacularly ESS.A.Y’s gorgeous versions of his late Viola Concerto and Japanese Silhouettes) attest. He had a brief moment of fame in the 1940s when his First Symphony “Babi Yar” (preceding Shostakovich’s choral masterpiece) received positive attention, after which he was roundly condemned in the anti-Semitic artistic purges that soon followed. He spent most of his subsequent career in “internal exile” in his native Kharkiv, where he composed a very substantial body of work, including nine symphonies and many other pieces. He thus qualifies for inclusion in the ARC Ensembles excellent ongoing series “Music in Exile,” of which this is the latest release.

Not surprisingly, Klebanov’s music reveals a progression from a more traditional idiom in the Fourth Quartet and Trio No, 2 (1946 and ’58 respectively), to the more spiky and adventurous language of the Fifth Quartet (1965, close to the world of Bartók or Shostakovich). What remains constant, however, is the consistent quality of his music throughout this program: its elegant lyricism and emotional directness of expression. The opening of the Fourth Quartet will surprise English-speaking listeners, for Klebanov bases it on a tune originally written by fellow Ukranian composer Mykola Leontovych which we know as the Christmas “Carol of the Bells.” Leontovych, a close friend of Klebanov’s, was assassinated for reasons unknown by Russian security forces in the 1940s. The music’s uncloying sweetness makes a very touching tribute. Indeed, all of Klebanov’s music reveals a sense of fragile, poignant beauty that refuses to be overwhelmed by sadness and despair.

The performances captured here make a wholly positive impression. The ARC Ensemble plays each piece with the kind of passionate conviction that its immediacy of expression demands. While the two string quartets show the evolution of Klebanov’s style most graphically, the Second Piano Trio is the major work here: thirty minutes of magnificently sustained musical discourse illuminated by captivating instrumental textures in this beautifully balanced interpretation. Chandos provides first-class engineering too. In sum, this is an excellent release in all respects, and if good, interesting chamber music is your thing, don’t hesitate for a moment.