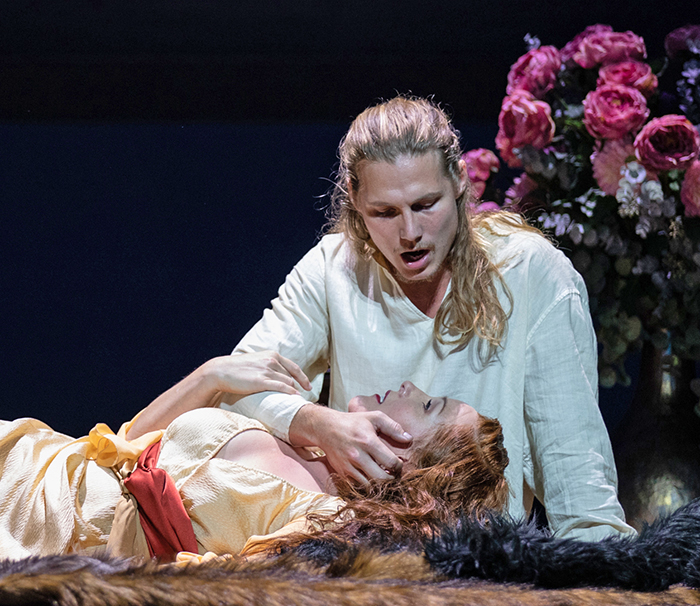 The opera house bustled with energy this past weekend at Bard College’s Fisher Center. Everyone seemed overjoyed to be on their idyllic midsummer opera weekend getaway to see Chausson’s Le Roi Arthus (1889 – 1895). The Frank Gehry-designed Fisher Center is well known for its high caliber opera productions under Leon Botstein’s aegis, and this show totally lived up to the hype. From the costumes and set design featuring a circular moon with blue glowing rims like a solar eclipse, to the impeccable ensemble between the orchestra and singers, the live performance exuded gigawatts of power, and the audience gleefully absorbed all of it.

The event was sold out on a pre-pandemic level, every seat was filled except for the front two rows. Proof of vaccination was required for entry, and masks were mandatory to be worn through the three-and-a-half-hour-long program. Broken up into three acts with two intermissions, it flew by like three binged episodes on Netflix.

A lot of Chausson’s retelling of the legend of King Arthur was new to me. The three leads all die in the end; Merlin is quite a pessimistic character, and Mordred seems far from the antagonist I thought I knew him to be in my childhood readings. In this version he does not duel with King Arthur, and his only crime was to report the truth of the affair between Lancelot and Guinevere. Though he does acquire the crown during the battle, it is undisclosed if he remains king after Arthur’s death. According to the program notes, Chausson’s sources are French from the 1200’s. Hardly an Arthurian scholar, I can’t help but wonder if he took any liberties with the story, or if he followed some particular source.

The manners in which they die are all quite distinct, and those scenes make up the majority of the final act. Lady Guinevere strangles herself to death with her own hair out of shame over her adultery. Sir Lancelot succumbs to his wounds from a battle he can only half-heartedly fight, as it is against his fellow knights and he is defending a lie. King Arthur doesn’t so much die as transform into a legend. He ascends towards the angels and enters an eternal sleep. While the angels sing his praise and assure him that his ideas of justice and a round table will last forever, they speak of him as a victim, unfit for the harsh cruelty of this world. He is utterly broken by the betrayal of Lancelot and Guinevere.

When Merlin appears earlier in the opera, I hope for something encouraging from his mentor, yet his words are anything but comforting. He seems to be in a dark and dismal place himself, and he coldly relates to Arthur the imminence of his death. Refusing to answer Arthur’s questions regarding Lancelot’s innocence, he tells him his entire life’s work has come to ruin, and he mocks the futility of trusting in the virtues of men.

Chausson wrote his own libretto for this retelling, and the music fits with his style superbly. It has more ornamentation than other romantic operas, utilizing a tonal language that shifts exceedingly fast, and perhaps at times detracts from the dramatic element. What I call ornamentation in this late romantic style doesn’t refer to trills or grace notes, but rather consists of substituting different harmonies under the same melodies in either parallel minors, augmented chords, or deceptive changes like sixth chords. While the music as purely instrumental music was intricate and beautiful, it didn’t always directly support the meaning of the words; the mood of the music sometimes created extra connotations that I didn’t perceive to be in the libretto. Yet it is a beautiful piece, and its trajectory delivers a very satisfying experience.

Under the inspired stage direction of Louisa Proske, the singers portrayed the personalities of their characters to perfection and moved with arthority. Lancelot the tenor, played by Matthew White, cut through any complicated texture in the orchestra with a well-focused strong core in his tone that simultaneously reflected the character’s prowess with a sword and his charm.  In stark contrast stood Guinevere, played by mezzo soprano Sasha Cooke. Her smooth, voluptuous, pitch-perfect and glossy tones projected to great effect. She truly evoked a queen—regal, yet intoxicated by love and capable of flashes of anger. Then we had King Arthur himself, played by Norman Garrett. At first, I found his tone a bit subdued and it did not project as easily as the others; initially he shared a warm and mellow quality with Guinevere’s. He must have been pacing himself, because later on he put across heartfelt monologues and bellowed forth outcries of raw emotion with total conviction.

Throughout the show, these great singers enjoyed and benefited from the support of the American Symphony Orchestra, which provided a solid foundation from which the singers could easily spring. Maestro Leon Botstein glued everything together. His clear and concise but expressive approach allowed the singers tremendous flexibility and artistic freedom. Four discrete monitors allowed the singers to see him from any spot on the stage without turning to the pit. The effect of the ingenious acoustic design of the Fisher Center surrounded us with sound. I had to inspect the pit at the second intermission to make sure it wasn’t being secretly amplified. Even while the chorus was in full cry and ceremoniously processing across the stage, I could hear one alto voice as if she were three feet from me. I realized that the sound was bouncing off of the flat wooden fronts of the balcony booths, an intentional aspect of the design, which was creating this surround-sound effect.

Thomas Schall tastefully choreographed the duel with athletically demanding, but not distracting action. Kaye Voyce’s costumes focused on circular icons, juxtaposing red and white for King Arthur’s cape, and beautiful green emblems for Mordred’s apparel along with his loyal knights, and blue for Lancelot and his. The circular theme tied in with the centerpiece of Matt Saunders large moon that could wax and wane, and it referenced the round table which appeared in whole or in shattered pieces throughout each act.

Botstein’s unity of artistic vision and strong commitment came across palpably in every detail. Every component aesthetically complemented every other. This show came across as high theater and absolute music. Gesamtkunst.

After the silences during this pandemic, I truly appreciated efforts to bring Le Roi Arthur to vivid life. This production made a compelling case that Chausson’s endearing and enduring tale of King Arthur deserves a place in the canon.

Sebastian Bäverstam is a cellist, pianist and composer from Newton, Massachusetts.