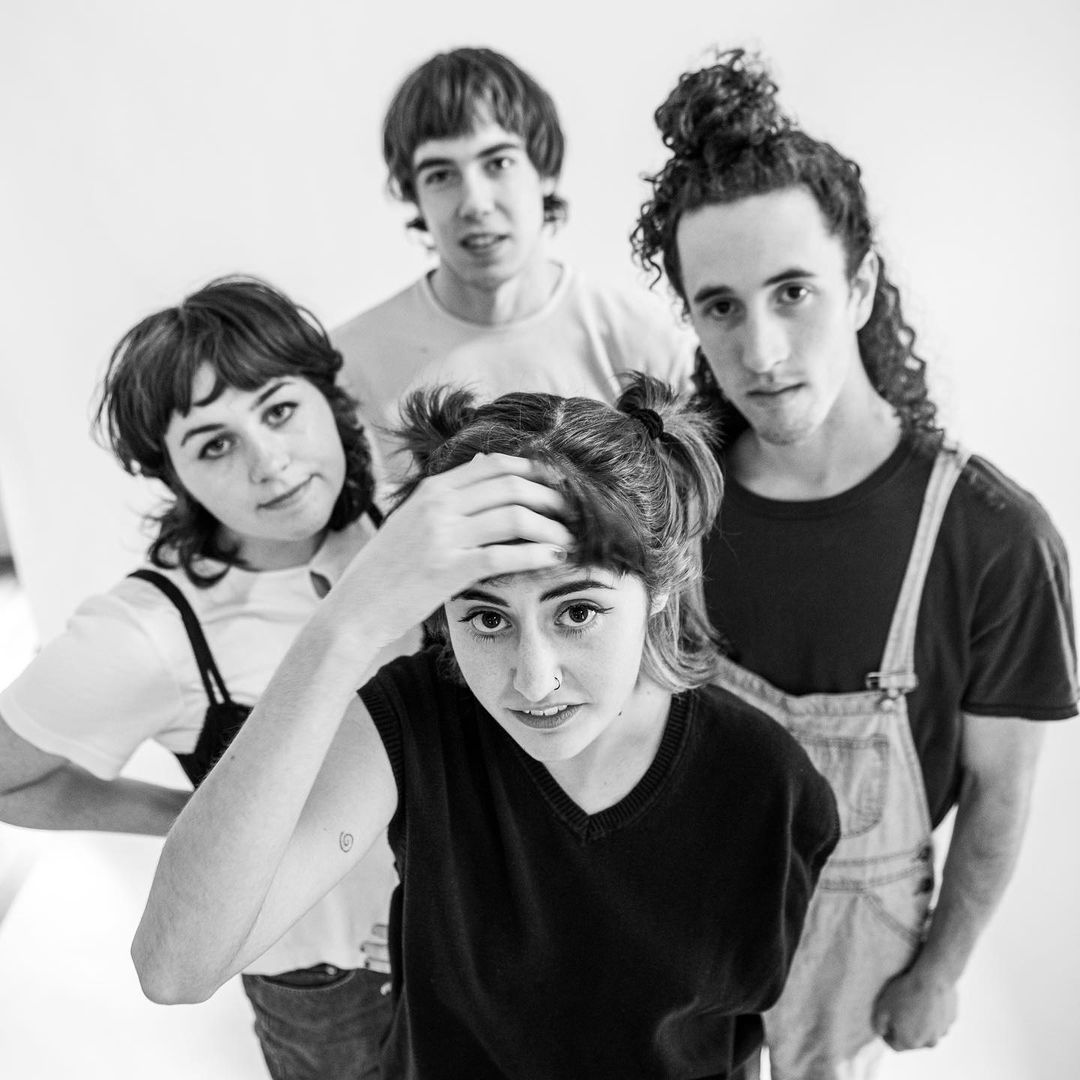 Lunar Vacation’s new album Inside Every Fig Is A Dead Wasp is perhaps the band’s best work yet. Potted with attention to emotion, each song is a plant towards musical maturity. Singer-songwriter and guitarist Grace Repasky described it to me as a fully-imagined, adult version of their first EP Swell that the band recorded in high school with limited resources within four days. In a way, they’ve returned to those roots through simple lyrics and un-crowding their instrumental strokes. But now, they know a lot more about what they’re doing.

The band is composed of Repasky (songwriter/vocalist/guitarist), Maggie Geeslin (songwriter/vocalist/guitarist), Matteo DeLurgio (synth), and Connor Dowd (drums). In our interview, I caught up with Geeslin and Repasky on the reimagination of their sound, how they sprouted from the Atlanta DIY community, and what finally made them fall into the places they were meant to be.

Defrosting their early beginnings in high school, Lunar Vacation played shows in the Atlanta DIY scene while writing and scrapping demos in their bedrooms. “We were 16 and didn’t know there was a scene because we lived 20-30 minutes outside of Atlanta. We were only going to big shows like Mac Demarco,” Geeslin and Repasky explained. “So on Wednesday school nights we’d have shows and bring a bunch of friends from our high school. And no one went to shows like that so it was a whole event and so fun,” they both continued.

Like all scenes, the Atlanta one ebbed and flowed. DIY Spaces closed down and opened back up depending on how much funding they received. And popular genres rotated from surf rock to hardcore and post-punk in the rejuvenated scene, according to Repasky and Geeslin. However the scene revolved, Geeslin and Repasky started young and soaked themselves in music that meticulously carved their evolving sounds.

“I remember when I discovered Walk The Moon as a teen. I was painting a table in my garage. On this cracked iPad, I put on Pandora radio. And that’s where I found Miike Snow, Cage the Elephant, Grouplove, Two Door Cinema Club, and all these cool indie-pop artists. That’s also when I got into vinyl and playing guitar,” said Repasky. “It felt like I was pushed off a cliff.”

“My older brother was into cool music but I never talked to him so I would sneak into his room when he was away,” Geeslin said. “I remember taking the MacDemarco CD and playing it in the CD player in my room. It was a very cinematic moment.”

“I remember the first time I saw Pond. I never experienced a psych-rock show before then. It was amazing how they played simple chords yet created this tsunami of sound and joy,” Repasky said. “We just stood in silence.“Nick Allbrook climbed over the fence using my and Maggie’s heads as little stilts,” they continued, laughing. “I like, I’m being touched by an alien.

Every small influence from Repasky and Geeslin’s pre-youth considered, Inside Every Fig Is A Dead Wasp accepts those, braiding acute textures like staccato, dry guitar, and clear vocals. Moreover, it pulls less reverb-washed and haze than their previous lo-fi, surf rock endeavors. “Instrumentally, we used to overcompensate arrangements with super intricate parts. That ended up clouding a lot of Grace’s melodies and lyrics,” Geeslin said. “With this new album, we all wanted to serve the song and not just our parts.”  For instance, the band’s second single “Mold,” couples with potent synth overtones reminiscent of Walk The Moon and Two Door Cinema Club. We can appreciate the tonalities where their 2010s indie-pop influences furtively peek through, inhaled with nostalgia in a new home.

In its full shell, Inside Every Fig Is A Dead Wasp is full of small rushes and less surprise. I’d imagine the intent of a first kiss, or perhaps, the acknowledgment of a last one. By marking songs as exciting and youthful, their sound promotes and prolongs a triumphant feeling of a first or last day of school; tomorrow, you can start over. Often, it’s hard to pin the qualities of a decade of music into words unless you’ve lived it through a specific pre-teen slop of time — which myself, Repasky, and Geeslin all did. Three of us agreed — that even if paradigmatic indie-pop hits were shelved away for 10 years and dug out in CD form from the bottom of our glove compartments, we’d remember all the words without hesitation. (And If you haven’t done this recently, I’d highly recommend it.)

“This is probably the most honest stuff we’ve written in terms of lyrics,” Repasky told me. “Our previous album Artificial Flavors has a bunch of different inspirations seeping into the work, but we tried way too hard to mask emotions through metaphors or complicated phrases. I don’t communicate that way or talk about my feelings that way.”

“I’ve tried to be blunt as possible, and sometimes it comes off as ridiculous or funny. But feelings that are that intense are usually ridiculous and funny. All love songs are like ‘I want to die’ but that’s crazy, you know. It’s just normal,” Repasky continued, laughing.

This is true in so many songs. For instance, in “Shrug,” another one of their released singles, Repasky sings, “I’m missing out on all the fun / When all I care about is finding someone / Gotta get up and shrug it off / Talk it out so I can understand.” There’s no decoding. It’s as forward and explicit as needed.

It was the first time band worked in the studio and opened up to each other and themselves and making each part intentional and collaborative to serve the song instead. Knocking out 12 hours a day, Inside Every Fig Is A Dead Wasp was completed in a little less than a month.

The album is about what most of us through when navigating a confusing shift from teenager to adult. It’s a lot of growth crowded into a few years, and especially so when that clip of time is peppered by a global pandemic. Right now, Repasky and Geeslin are taking online summer classes for their senior year. Slowly, they’re sinking back into the Atlanta scene after a year and a half. Back in July, they didn’t tell me about definite plans to go on tour.

Often, these years feel like an ongoing enjambment; they’re no real breaks and life moves so fast. And we never stop to remember — what for? From going to college, touring, relationships, and mental health, the ability for the band to make this an easy listen, I garner, must have an arduous but hopefully rewarding task. “It’s a coming of age thing, but sometimes I feel like it’s not the right word. But I don’t know what else to say,” Repasky started with when I asked them the first question. And sometimes it’s okay not to know because what a ridiculous expectation to have it all figured out when you’re in your 20s. To acknowledge the act of not knowing is the best way to let your seeds water themselves through the rain.

Inside Every Fig Is A Dead Wasp is out October 29th on Texas-based label Keeled Scales.