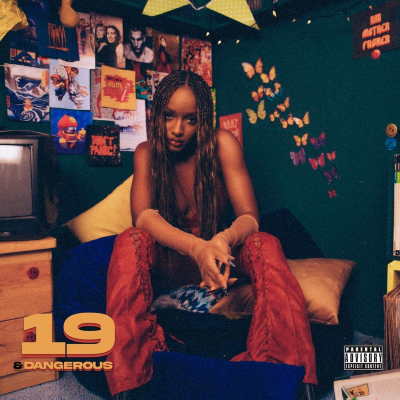 If there’s one thing that Ayra Starr wants you to know about her, it is that she has always been ahead of the pack. “I’m the queen, bow down,” she commands on ‘Bridgerton’, a punchy R&B number that thrives off beats as filthy as the record-smashing Netflix series that it’s named after. The rest of the Beninese-Nigerian singer-songwriter’s debut album ‘19 & Dangerous’ hinges on this unshakable confidence, full of vivid, bolshy kiss-offs to the haters, wondering how to be someone they’ll envy for eternity: “If you hate your enemies/Enemies shine”, she sings with a wink on recent single ‘Bloody Samaritan’.

But Starr has every bloody right to brag: at 17, Instagram covers of hits from artists like Andra Day and 2Face Idibia caught the attention of Don Jazzy, the boss of Nigeria’s influential Mavin Records, with whom she later signed. Following the release of her self-titled debut EP in January, the now 19-year-old has since been pivotal to the increasingly global influence of afro-pop, amassing over 25 million streams and topping the charts in her home country. Tight and assured, ‘19 & Dangerous’ is a timely reminder that Starr is the cultural phenomenon who she’s always told us she was, even as she grapples with the pressure of growing up in the public eye.

When the album opens with the celebratory ‘Cast’, it feels exultant, like a confetti cannon bursting into life. “I know my blessings no go pass me by/Cause I am gonna live my life”, she proudly affirms over gentle percussive cuts on the pre-chorus. The 10 tracks that follow are varied – slinky and upbeat, party-ready, or throbbing with emotion – with the intention of exploring every facet of life as a teenage superstar.

‘Toxic’ jumps into Starr’s new circumstances and tackles the darker side of fame with direct lyricism. She spells out her trauma simply: “Why did you give me the drugs/Why did you force me to take it?”. It’s a powerful moment that brings out Starr’s sensitive, socially conscious interior, something that is highlighted again later when she commits to laying down her emotions through Yoruba vernacular on ‘Underwater’, a spacey, bass-assisted meditation on depression.

There’s a real allure to Starr’s world of magic, determination, and confidence, which she explores and inhabits as ‘19 & Dangerous’ progresses. The surging and euphoric ‘Fashion Killa’ showcases it best, with lyrics that channel the energy of a big night out over a joyous, strobe-lit beat. The track exemplifies how the strength of Starr’s self-belief is the album’s true quality: balancing a sensitive kind of pop with proud, flawless bravado.