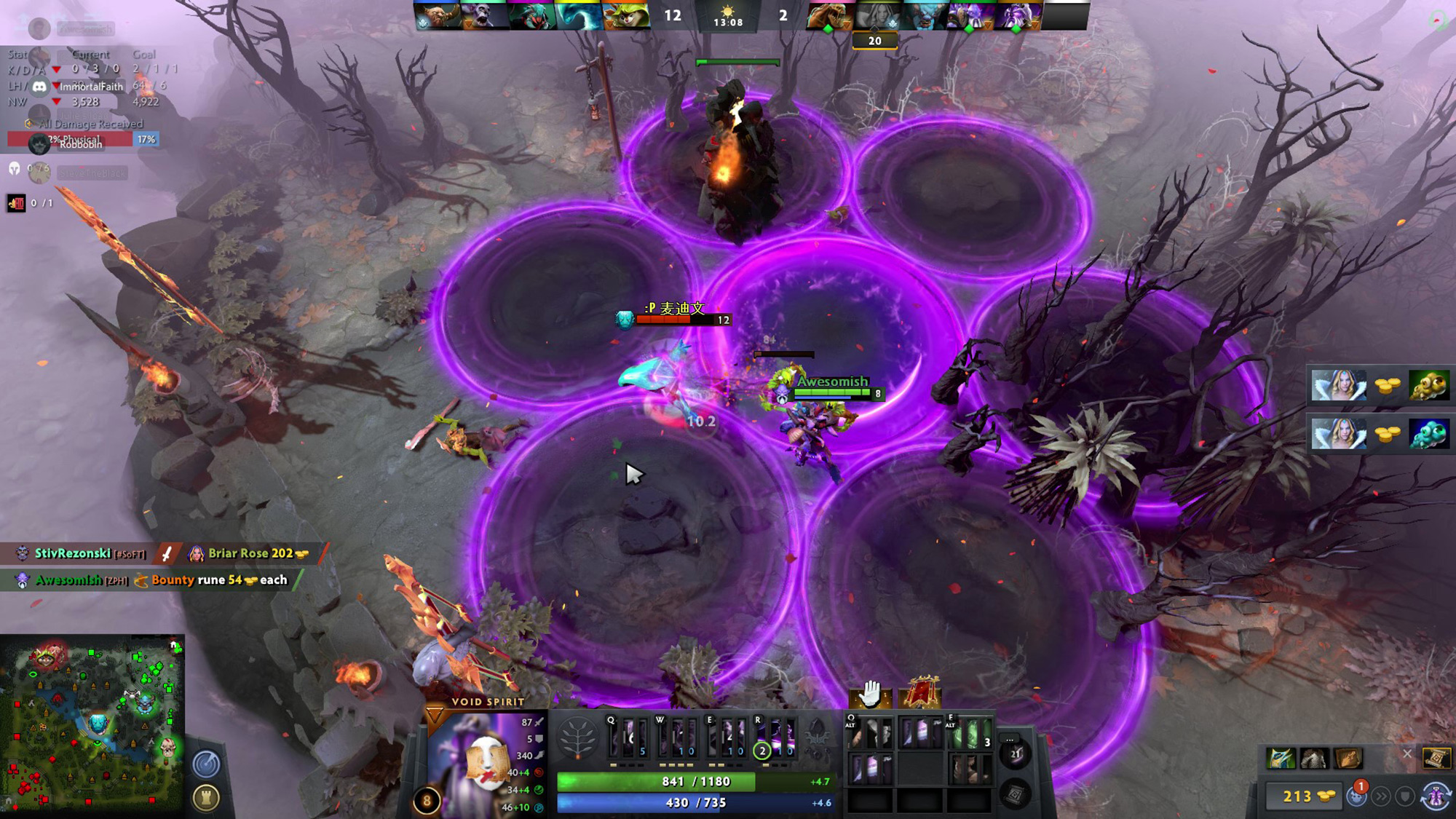 The blob of sentient water is better than me. It’s clear within seconds, as our opening clash on the midlane forces my purple Void Spirit to scamper back under the safety of my tower, already sacrificing precious opportunities to punch gold and experience out of the minions now battling with my own. I go to use the leaves in my inventory on a nearby tree so I can devour it for health, but I turn back too quickly, wasting yet more time as I fruitlessly trudge back and forth, knowing one of the most famous names in Dota is scrutinising my every move.

After nearly 4000 hours of playtime, I’d decided to seek professional help – and found myself vindicated by professional coach Daniel “ImmortalFaith” Moza, who declared within minutes of our session that actively attempting to improve is the healthiest way to play. In case it’s not already clear, almost everything about the above is weird.

I wouldn’t call myself an addict, but it’s hard not to describe Dota 2 as a habit. For several years, it was a daily presence that neither me nor my friends could imagine life without. Playing Dota 2 is like staring into the maw of an eldritch beast you know you’ll never fully understand, then throwing yourself into its jaws for precisely that reason. It’s a twisting, nigh-unfathomable monstrosity that shifts beneath your feet with every patch, constantly throwing up problems for which you’ll feel ill-equipped even after many thousands of hours. Getting good at Dota is, emphatically, hard work. So why, now, almost eight years on from my first ever match, does it still have a hold over me? What, on a recent (and separate) Saturday, made me sit through hours of training videos, taking notes as if preparing for an exam? Why, for that matter, is Dota 2 the second most played game on Steam?

Dani, as he introduced himself to me and my team, is kind of a big deal in Dota. He’s taken team Vikin.gg to victory in dozens of tournaments, but he’s also a name it’s hard to avoid seeing whenever you launch into a game. Every day, tens of thousands of players use his in-game guides to steer their skill and item choices – both vital ingredients for success. If you asked an average player for their dream coach, there’s a good chance he’d come up.

When I asked Dani why he reckoned people were willing to throw so much time and effort at a game, alongside money in the case of coaching, he seemed surprised I had to ask the question. “People like to win”, he told me. “It’s like a human constant, we really don’t like losing. Even if we’re doing things for fun, we’re such competitive beings that we’ll want to win. With a coach, you’ll accomplish your goals way faster and easier, because he’ll have developed a way that helps you do that.”

Back on the midlane, I’m very much losing. I’ve had over an hour with Dani already, where we’ve covered the fundamentals of his training regime and he’s shown himself to be a friendly and approachable mentor. I am, nevertheless, on edge. As often happens with Dota 2 (and most any performance under pressure), my early mistakes start compounding into bigger ones. I’m playing far worse than I usually do, wasting spell after spell in stupid and all too visible ways. It’s like there’s a film over my thoughts, where every intent has to filter through the mortifying ordeal of being known – known to someone who’s infinitely better than me at Dota 2, and (very humanly) doesn’t always manage to hide his moments of disappointment or frustration. It turns out I do hate losing, in this context, despite typically being sanguine in the face of defeat. I wonder if it’s ever occurred to Dani that a winning move might be not to play.

Unfortunately, everyone else is having just as tough a time. I’m playing with friends rather than strangers, for reasons that will soon become clear. Our team’s ice witch and flayed abomination on our top lane are proving no match for the enemy’s squirrel/centaur combo, while the bearded triangle and space cow on our bottom lane die again and again to the opponent’s magic time beetle. Around fourteen minutes in, Dani tells us to go for a Hail Mary, “because the game is almost over”. It’s our last chance. We group up! We fight! We all die, but Dani reassures us we’ve done better than we think. When you’re sufficiently far behind, it turns out, losing five of your heroes in return for two kills is a worthwhile trade.

It’s a useful pearl of wisdom, which buoys us for the next few fights. We have some more disasters, but then a glimmer of hope shines out from a particularly foul spot of toxicity. Our opponents take Roshan (a big stompy dragon you can kill for a free respawn), but then deny the Aegis of Immortality. They’ve blasted it into oblivion rather than bothering to use it, knowing the accompanying announcement will rub our faces in that fact.

It’s rare for a team to do something so self-destructive, but it’s still an all too common reminder of another reason why Dota is terrible and bad: it’s full of shits. You’re lucky to play a game without rubbing up against at least one arsehole, which is a reliably awful enough experience to make me reluctant to play without at least a couple of friends who I can laugh about it with. Toxicity was just as much of a problem in a live, 10-person training event I went to many moons ago, which is why I was surprised when Dani told us that he never encounters toxicity among his students – or at least, not while they’re with him. He’s aware not everyone he coaches is always pleasant, which might explain why he encouraged us to avoid focusing on each other’s mistakes. It’s not that we’re shits, I think – it was more of a general principle he chucked in later as we wrapped up.

Once we’re all alive again, Dani gets the five of us to charge out from our base, overruling our instinct to turtle from the questionable safety of our high ground. It immediately pays off, as the water bastard gets caught out on the midlane. He tries to sploosh to freedom, but we’re on top of him, surrounding him, thwacking away as Dani bellows with infectious enthusiasm. “Press all the buttons! Kill them all!”, he yells, and somehow we do. It’s a glorious high, followed by a round of collective giggling. Even when you’re treating Dota as serious business, it remains exceptionally silly.

Sadly, that turns out to be our last hurrah. Within five minutes the enemy, fat with our blood, storms through our base and brings the Ancient crumbling to the ground. We type out our GGs in chat, at the same time as the time beetle tells us to “SAK A DIK”. Dani comments, somewhat wistfully, that if people aren’t saying this sort of thing to us then we’re not really playing the game. “You’re not getting the full experience”, he says, too truthfully.

Dani stays with us for a generous length of time after, happy to be quizzed about both aspects of our play and what he’s up to on the pro scene. He also checks out the profile of the Morphling player who gave me so much trouble, who is revealed to be a smurf. No wonder I was having such a miserable time on the midlane. I was at the mercy of a much more experienced player, and barely stood a chance.

When my friends and I debrief, opinions on the session are broadly positive. Everyone said they found it useful, and, perhaps more importantly, enjoyable – with the one extremely fair exception of our friend who’s much newer to Dota. “It was generally quite overwhelming and stressful for me, but that’s more my mentality and skill level than anything he was doing wrong”, said pal (and noted author) Steve Peacock. Oddly enough, I’d probably say exactly the same thing, despite ultimately enjoying myself.

How to go about explaining that? Maybe this is a case of type-2 fun, where the stress of the moment sublimes into enjoyment after the fact. Maybe the highs simply outweigh the lows. Or maybe (and you can tell this is the most promising answer because I’ve left it to last) it’s because putting your all into overcoming a challenge is, or at least can be, innately enjoyable. That’s the angle from which Dani’s claim about healthy play makes the most sense to me, where the focus shifts from competition to self-improvement. To be fair, he was big on that, too.

“Everything I’m saying has a basis in the real life world”, he said. “To me, what I’m creating is a systematic way of improving. That’s what I call it, because I’m giving you rules that create discipline, which creates consistency – then within those rules there are systematic ways to keep on upgrading yourself as a player”.

“And as a person?”, I can’t resist prompting. Dani agrees, and tells me about a player who he coached from roughly my level all the way to the upper echelons of, fittingly enough, Immortal rank.

“He started changing when he was sleeping; when he was waking up; what he was eating – he started doing everything more healthily. He basically changed his lifestyle as well, during the coaching and because of the coaching. In the end, the way I see it, you can be a student that goes to ten coaches and learns nothing, or you can just go to one and learn – so long as you have the mindset to learn.”

It’s not like Dota needs to be a force you ride until you’ve become your best self. Playing in a more relaxed way isn’t necessarily unhealthy, Dani conceded, it’s more that competitive stagnation doesn’t suit a certain kind of person. Certainly not Dani, and certainly not the people who pay for his lessons.

Our session was provided free of charge by coaching organisation Gamer Sensei, who work with Dani and other coaches to provide training across over a dozen different games. A group session with Dani normally costs $212, which works out to about £38 each. Nearly all of us felt we wouldn’t pay quite that much, but that’s because we’re simply not at a level to benefit from Dani’s particularly astronomical degree of expertise. As my friend Ed put it: buying another session with Immortal would be “like hiring the personal trainer of an Olympic athlete at athlete prices when you’ve just gone to the gym for the first time.”

In the games we’ve played since our session, I’ve felt – and my friends have seemed – more galvanised when playing from behind. We’re still losing, but we’re making smarter, sharper decisions, too. It’s not all positive: a defeat when you’re trying your hardest stings more than it otherwise would, and the group discussion after a narrow loss last night definitely, albeit briefly, descended into a bitterness that we usually manage to avoid. The solution, as proposed by my friend Robin, might lie in cordoning off “srs Dota” from our usual games, where we’re free to banter rather than relentlessly strategise. A healthy balance.

Gamer Sensei has cheaper coaches, and Dota has weekly tournaments. We just might have a crack at both.

Dota 2 is available now for PC for free. You should try it, maybe.