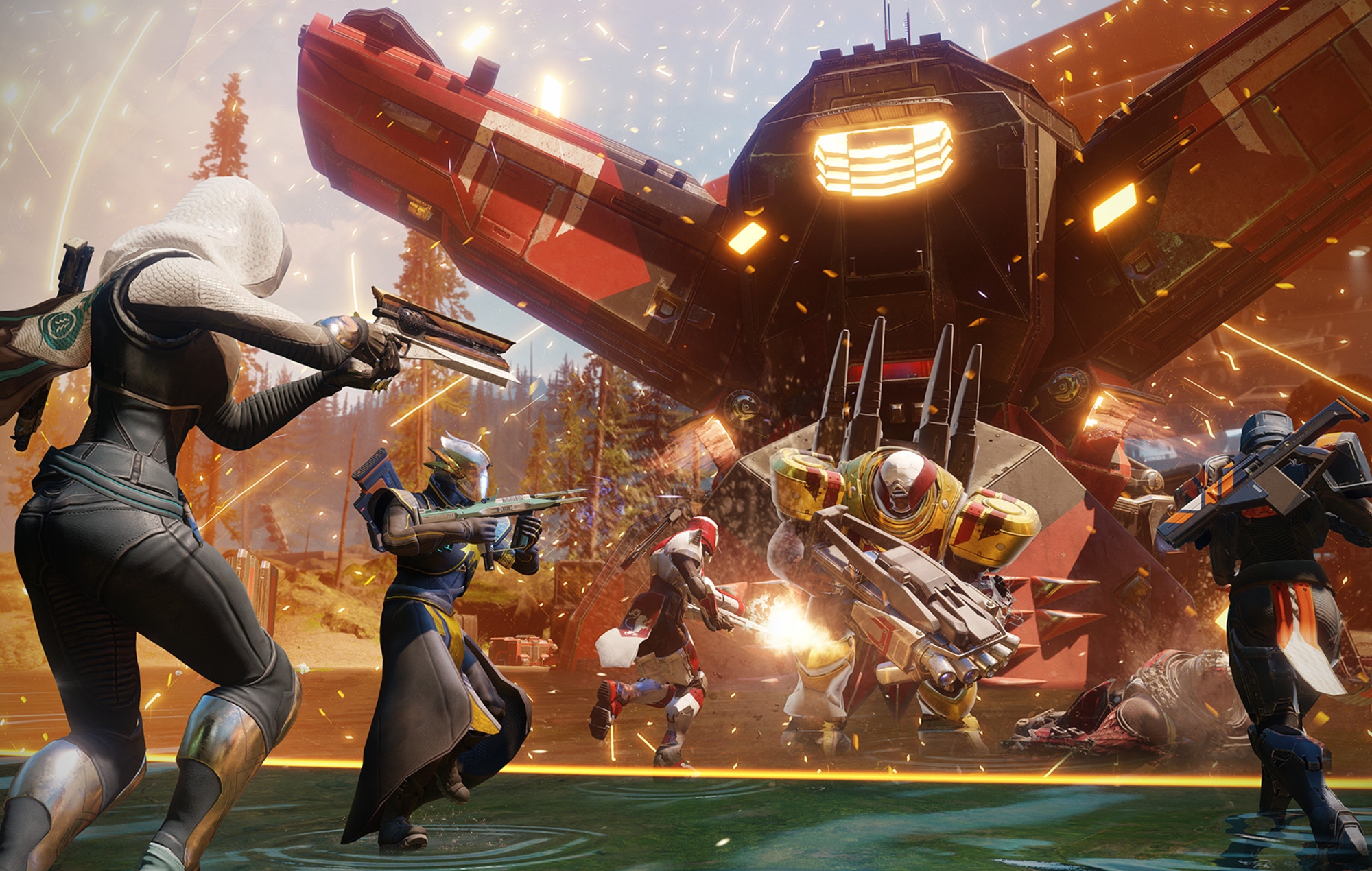 you know what’s better than a great game? A free, great game. Compelling gameplay and a good story could mean the difference between the best free games and the just OK free games.

Luckily, the last few years have seen more and more developers launching their games with no up-front cost. Though some may complain that the ‘games-as-a-service’ gimmick is taking over gaming and threatening to change the way we play forever, it’s impossible to deny how much easier it’s made the entry to gaming for people all around the world. Gone are the days where free-to-play was more of a warning than a bargain – as we’ve found out, there are plenty of incredible games that can be played with no cost.

To help save your wallet, we’ve gathered some of the best free games to play across almost every platform. From hack-and-slash to strategy, shooter to management sim, our list of top free-to-play games should have something for everyone.

If you’re looking to scratch an itch for firefights, Destiny 2 should be at the top of the list. Bungie‘s first-person shooter MMO manages to offer a veritable ocean of well-crafted content for players, and continues to be supported with fairly regular content updates.

Destiny 2‘s campaign can be played alone, however much of the PvE content – including incredibly well-crafted raids and challenging dungeons – will need a team of like-minded players to get the job done.

For those looking to test their mettle against other players, there’s an active PvP community that has a variety of different game modes within Crucible. If you like looting, shooting and paying nothing, Destiny 2 is well worth trying out for free.

Tearing onto this list with a hint of chaos is Rocket League, Psyonix‘ futuristic sports game that went free-to-play back in 2020, hitting 1million concurrent players along the way.

While the (literal) goal of Rocket League is simple in theory, actually winning is a whole new ball game. Each match is a fairly straightforward game of football – you’ll need to score against opponents by getting an oversized ball in their goal – except for one caveat: the games are played entirely by car. This means that Rocket League allows players to drive along the walls, use nitrous boosts and even explode their opponents to achieve victory. If you’ve never played Rocket League, why not give it a Nice Shot?

Rocket League is available on PS4, PS5, Xbox One, Nintendo Switch, and PC.

We’d be remiss not to mention Fortnite on our list of free games – after all, the battle royale helped prove that launching a free-to-play is a viable model, even for larger budget titles.

For anyone who may somehow have missed over Fortnite, each match revolves around fighting to be the last person standing on a map that’s shrinking constantly. You’re up against 99 other players, so look alive – you’ll need to build, fight and run to come out on top.

How do you fancy your chances of surviving an apocalypse? Better yet, can you keep a vault-full of other survivors alive?

With Bethesda‘s Fallout Shelter, there’s no better place to find out. This single-player base-building game requires that you don’t just keep your population alive – you’ll need to make sure they are happy and thriving.

Since launch, the game has been updated to include a variety of quests where you can send your residents out to complete missions and gather extra loot for you to gleefully horde. It’s a very hard game to put down, so if you’re looking for something to play between bigger games, look no further.

Fallout Shelter is available on PS4, Xbox One, Nintendo Switch, PC, and Mobile.

Sometimes, you just want a game where you can beat up your pals. Fighting game Brawlhalla is happy to hand you the hammers, swords, and guns to do so – provided you’re fast enough to snatch them up.

With a strong roster of unique and crossover characters (hi, Rayman), Brawlhalla‘s battles are decided by the weapons that fall to each stage. Each character has different movesets based on what they manage to pick up, making Brawlhalla an incredibly reactive fighting game to play with friends.

If you’ve been thinking about trying out a MOBA – multiplayer online battle arena – Pokémon Unite is the perfect launching pad for newcomers. Even if you’re a hardened veteran in the genre, Pokémon Unite brings a fresh – and more relaxed – angle to enjoy.

Playing as a Pokémon, players will need to beat opponents and other wild Pokémon to gather experience and Aeos Energy, which is used to win the game. Each Pokémon plays completely differently from the next and has unique skills which determine what role they can perform best in the team.

Matches are much shorter than other MOBAs, meaning Pokémon Unite is a great – and free – option for picking up when you have the chance.

Pokémon Unite is available on the Nintendo Switch.

Speaking of MOBAs, League Of Legends is the next step up from Pokémon Unite in terms of difficulty. In Riot Games‘ flagship title, two teams of five players will compete to win team fights, secure objectives, and eventually destroy the enemy nexus.

It’s a perfect mix of fast-paced action and thoughtful strategy, and the champions that make up a roster of 150+ can all be purchased with currency earned in-game. It can have quite a tough learning curve, but if your heart is set on picking up a MOBA, we’d suggest giving this one a download.

Path Of Exile is all about looting, fighting, and looting some more. Working in the same vein as Diablo, the isometric hack-and-slash lets players become markedly stronger as they find improved equipment and delve further into class-specific skill trees.

It’s very satisfying to power through hordes of enemies with a build designed to wreak as much havoc as possible, and Grinding Gear Games keeps the game fresh with large updates, including the recently launched Path Of Exile: Expedition.

Path Of Exile is available on PS4, Xbox One, and PC.

While Hearthstone is an easy to understand card game for newcomers, there’s deckfulls of depth available to play with. With different classes available, battling across the board means trying to wipe out your opponent’s hitpoints while keeping your own intact.

It’s an addictive just-one-more type of game and is surprisingly adrenaline-packed for a card game. At higher ranks, much of the meta revolves around trying to break it, so experimenting with custom decks is highly encouraged. If you’re not in a hurry, pull up a seat and try out Hearthstone.

Hearthstone is available on PC and Mobile.

In Doki Doki Literature Club, things aren’t always as they seem. For those who are hearing about Doki Doki for the first time now, I recommend going in completely blind – it’s a short game, but lots of the fun is in feeling increasingly unsettled as it goes on.

Without ruining too much, it’s worth noting that the Steam page does note “This game is not suitable for children or those who are easily disturbed” – and that’s all the spoilers you’re getting.

Doki Doki Literature Club is available for free on PC, however, a paid version is available on Nintendo Switch, PS4, PS5, Xbox One, and Xbox Series X|S.

Tyria is a beautiful world, and you’re invited. Now that Guild Wars 2 offers huge swathes of its content completely free, now is the perfect chance to jump in and see what you’ve been missing. With a delightful community and the chance to take part in jaw-dropping battles (see: the giant dragon above) between monsters and players alike, there’s a fantastic amount of stuff to do across the world.

Guild Wars 2 also offers a unique take on classes, with some of them – particularly the Engineer and Mesmer – really standing out in the MMO genre. With the chance to make your class a specialist in different features and customize them to your heart’s content, Guild Wars 2 is waiting for the chance to wow you for free.

Guild Wars 2 is available on PC.

With a gorgeous world and lovable characters, it’s hard to stop Genshin Impact from sweeping you off your feet. You can lose hours taking your party on a grand adventure and leveling them up, all within a world that encourages exploration and scales in difficulty to match your progress.

Like many of the free games on this list, Genshin Impact fans can expect fairly frequent updates that bring new characters to meet, areas to search, and enemies to fight. If you’re not worried about walking right into a timesink-trap, Genshin Impact is a great free game to try out.

Have we missed your favourite free-to-play game? Let us know what free game you’d recommend to others.