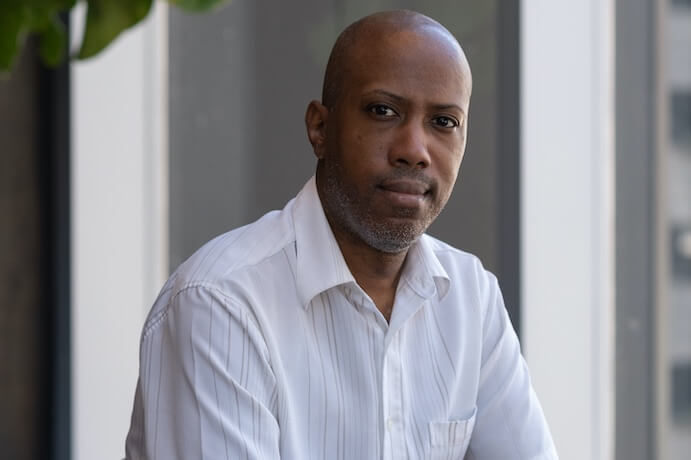 Sitting at the crossroads of the industrial and the natural, Norman W. Long’s BLACK BROWN GRAY GREEN (Hausu Mountain Records) processes and manipulates environmental soundscapes locally sourced from Chicago’s isolated South Deering community. This ambient and meditative new record represents a multi-year exploration of the narratives and dialogue from urban Black and Brown communities facing environmental racism, spiritual separation from the Land, and harsh redlining and gentrification operations carried out in their south Chicago neighborhoods.

Long is a Black sound artist concerned with the intersections of landscapes; space and silence; recollection and memory; and community engagement. He has presented work in a wide range of mediums from sound walks and live electronic performance to contemporary art gallery exhibitions. His 2019 “Neighborhood Listening Garden” sound installation housed in a community garden interrogates the question: “What does a Black/Brown community sound like?” Similarly, “Big Marsh Soundscape” highlights the restorative ecology of a neighborhood devastated by capitalist and streamlined progress to the detriment of its residents and landscape. BLACK BROWN GRAY GREEN builds upon this catalogue of work with field recordings and sound collages. The album opens with a substantial live performance from 2019. At first, we are situated in an active environment, abundant with crickets, birds, and other natural noise-makers. The sound appears “untouched” and unprocessed by Long, who then subtly and gradually introduces his hand. A sustained drone and grainy bubbling slowly emerge from the soundscape, as does a high-pitched pulsating tone that conveys a manufactured chirping. These two seemingly disparate and opposing forces so easily come together to create a sound that feels both nostalgic and futuristic at once. Gentle beeps and boops of a synthesizer chatter with birdsong. Crunchy filters, wind, and static noise blur together in a desert of sound. The effectiveness of this track lies in the composites of Long’s worldbuilding — blending natural sounds with the electronic to create something new entirely.

While South Deering is the largest community area of Chicago, only about 20% of the land is residential, with the remaining amount zoned for commercial and industrial use. Long states that the community is comprised of “single family homes surrounded by landfills, factories, rail yards, brown fields, and un/under-used industrial structures,” and that many buildings and sites have been abandoned. Whereas other tracks excel at accentuating the presence of natural landscapes or human interaction with those sources, “Reeds” brings attention to the desolation and emptiness of places left to “waste” due to disinvestment and disconnection. Long demonstrates this with layers of harsher post-industrial textures with sounds of metallic scraping, punctuated with percussive clangs and dings. This disinvestment in communities has plagued American people of color for decades. Chicago’s history of redlining dates back as early as the 1930s, when white flight brought white families to the suburbs in order to profit from proximity to the city without the presence of ethnic minorities. This, however, meant that the presence of people of color brought on the devaluation of housing, which in turn encouraged violent and racist behavior towards Black and other people of color hoping to settle in these neighborhoods. Today, South Deering is home to primarily Black and Latin residents, and Chicago remains one of the most racially-segregated cities in America. The ongoing pollution of leftover industrial sites, disparities in food and transportation access, and general lack of economic investments in the community — on top of last year’s grief and trauma in response to the murder of George Floyd and failure of the US-government to contain Covid-19 — culminate in a wide-reaching system of oppression faced by people of color in communities like this one.

BLACK BROWN GRAY GREEN is highly successful in providing a glimpse into this reality, as well as offering an invitation to heal. “Essential/Sacrificial (Worksong)” is a contemplative choir of croaking, with low rumbles of distant cars. The manipulation of sound, if any, is oblivious to the listener — it forces us to listen closely. The final track, “Recovering Landscape Community,” similarly urges an exercise on deep listening, as cicadas and chittering converse with casual disruptions by human technology. The title of the track imposes the idea of a community taking what was severed from them — a (re)connection to the natural world, to [our] surroundings, and to the Land; a radical act when contextualized in a landscape of trauma.

By putting the organic and the artificial in dialogue, Long creates an intriguing, pensive record that forces us to look inward. Long’s voice is integral in this moment as he calls on us to listen deeply, then to “join in on the chorus that demands justice for Black and Brown people all over the world.”