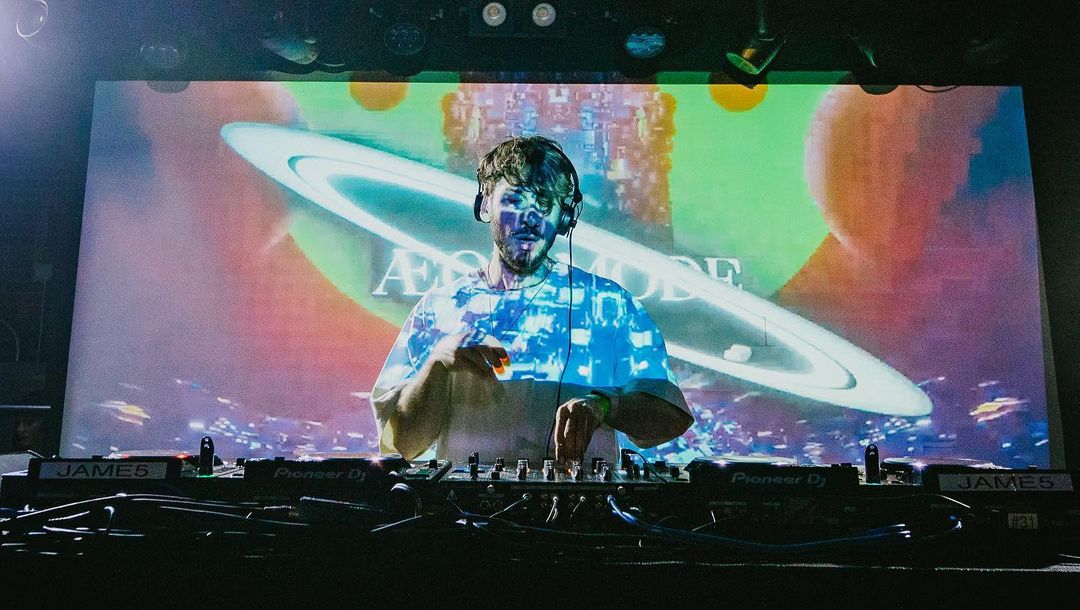 Blanke‘s career has taken him halfway across the world from Australia to the United States, and has already seen him work with dance music heavyweights such as ILLENIUM, Zeds Dead, and more. While the COVID-19 pandemic put a relative halt on the rising producer’s meteoric ascent, Blanke did manage to avoid the pandemic almost entirely due to an alignment of the universe. Returning to Australia as the United States began to shut down, he continued to tour throughout his home country. When Australia rose in cases, he had already moved back to Los Angeles and set himself up to start touring the US.

As John Paul Orchison’s Blanke moniker has risen to success, the producer is now turning his focus more toward drum ‘n’ bass with his next project, ÆON:MODE, which he first introduced in live form while in Brisbane earlier this year. Keeping the new work under the Blanke umbrella but utilizing it to show a shift in sound, the producer sat down with Dancing Astronaut to talk more about his new vision.

Calling in from his apartment in Los Angeles, Blanke reminisces on the pandemic and the long road he took to eventually feel comfortable enough to begin producing (and releasing) drum ‘n’ bass. His new song “Breathe” marks two firsts—it’s the first track from his upcoming ÆON:MODE project on Deadbeats, and the first time he is releasing a track that contains his own vocals.

“I just remember when I was starting out doing production and one of the first genres that I tried was drum ‘n’ bass, but it was so technical, and so out of my realm,” Blanke said when reflecting on why he chose to make the sonic shift. However, he continued to have an interest in the genre, coming back while he honed his sound and expertise. His 2020 single “Alchemy” saw a return to experimenting with the genre. Going on to peak as the No. 1 most played record on Australia’s Triple J at the beginning of the year, the track became a near-instant hit for Orchison. Following the success of the track, he opted to delve further into the genre and fell in love once again, finding a surge of inspiration.

“Breathe” wound up landing as the first single from Blanke’s upcoming ÆON:MODE project, with a full EP planned for release sometime next year. At first, the Canberra-native tried to find other artists that could fit into his vision for the track, but none felt right. He then decided to try having a crack at it himself.

“It’s kind of something for me that just feels very vulnerable considering like I’m not initially a vocalist by any means. It feels great because I mean like, the whole track and like the voice as well as all the production is all me now. And that in itself is a pretty wild feeling because usually, you’re kind of sharing that with other people, whether it be vocalists or collaborators. It feels pretty fulfilling, to be honest.”

The track itself narrates taking deep breaths before going into battle. It fits into the theme of Blanke’s catalog, as he finds himself often writing triumphant tracks that follow an almost narrative type of journey. “It’s kind of like going into battle, breathing in, breathing out, getting ready to put yourself forward for whatever the hell you’re kind of facing,” says Orchison.

While a full ÆON:MODE tour will have to wait a little bit until more tracks make their way out into the light of day, the producer has already tested the show out while touring in Australia. The project did manage to make its official US debut at Brownies & Lemonade‘s Monday night drum ‘n’ bass show on September 20. The moment proved poetic for Blanke, as he made his US debut at the same venue with Brownies & Lemonade just two-and-a-half years prior.

“We ended up selling out the warehouse and it was, you know, a drum and bass show on a Monday, no lineup, in America. That, to me, makes no sense. And so I was really stoked with how that worked out. And like, the energy of the crowd was breaking, like was mental. I was blown away.”

While the universe lined up enough for Blanke to almost completely avoid the pandemic (besides the first few months he spent alone in an apartment in Los Angeles feverishly producing new music), he still ran into some trouble trying to leave Australia. In order to return to the US, he needed to prove that his business was based in America and apply for approval. After being denied the first time, he managed to eventually move back to Los Angeles but will need to wait a while longer until he can return to his home country. In the meantime, he has his sights set on not only a new project to continue building out, but perhaps helping to lift the esteemed genre’s stateside popularity.

“It’s such a good sound generally that I think, you know, there’s room in the market for sure. And there’s room in people’s libraries for drum ‘n’ bass to live. And I think that it’s going to be a really cool thing when it comes about.”