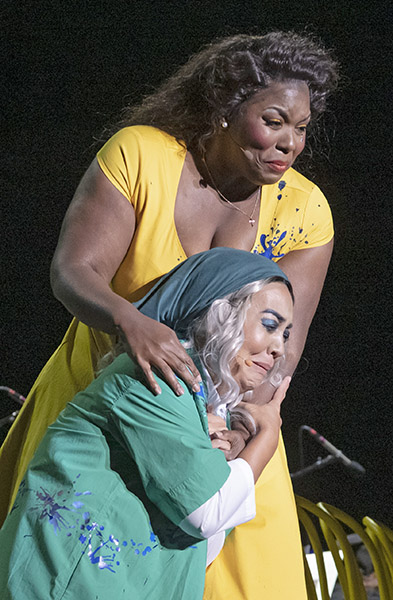 This succinct opera has the tone of a modern thriller and leaves us to contemplate the deadly consequences of infidelity and jealousy for five members of a close-knit community. Returning to live performances on the Boston waterfront after a successful eight-part online miniseries during the pandemic (discussion HERE, and review HERE), this outdoor evening began with a remarkable addition: Pagliacci’s famous prologue, deftly and enthusiastically sung by Chilean baritone Javier Arrey; dramatically starting from an aisle in the audience he worked his way up to the stage.

Production
Cavalleria began around 7:50pm, competing throughout the evening with the expected (regular) airplane takeoffs and a loud rock event in the Seaport area that bounced off a building located behind the stage left area. Audience members moved through three lines (vaccination card/recent test, security, tickets/ushers, before being shown to their seats. Listeners could re-seat themselves to explore different acoustic possibilities and seek more spacious “distancing,” since only the front half of the spacious Leader Bank Pavillion was packed.

A trio of three balletic modern dancers (barefoot, in grey), choreographed by Levi Marsman, were omnipresent during the first and last thirds of Cavalleria. Although not always captured on the side screens during video closeups of the singers, their interpretive antics could be clearly seen from every vantage point. Sometimes acting as a Greek chorus, and sometimes portraying festive elements like flowers and crowds, dancers Victoria Awkward, Machayla Kelly, and Marissa Molinar made for a sinuous, seething unit. They added much-needed life and motion to the production as a whole, although they functioned in some surprising ways: they absented themselves from the long orchestral Intermezzo that takes place during the Easter service attended by Lola and Turiddu, whereas they frantically surrounded Lola, waving her offstage in the final scene (surrounding and almost carrying her away).

Stage director Giselle Ty created a complex melodramatic scene on the front of the stage through an elaborately mimed introduction for the soloists and dancers. This contrasted sharply with the rest of the production, based around arrangements, piles, and barricades of bright yellow café chairs made of cane (Julia Noulin-Mêrat, set design) and Crayola-bright modern attire for each of the leads (Gail Astrid Buckley, costume design). Since the orchestra and chorus took up half of the non-raked performing space, with monumental black curtain backing them, lighting tended toward bright mono-chromatic washes (pinks, and blues were most effective for establishing or changing moods), with occasional abstract designs projected above the orchestra, directly onto the curtain (Molly Tiede, lighting designer).

Two banks of speakers suspended over the central stage amplified and projected the closely-mic’d performers. Those in the center 50% of the seating area had no trouble hearing most of Mascagni’s delicate orchestral touches and following every word of the story, but the fairly loud din of the surrounding seaport made these sections more challenging the further from the stage one sat. The Pavillion’s soaring circus-tent architecture is open on the sides, encouraging a festive atmosphere more akin to Café Momus than a working-class Sicilian village on Easter.

Voices
The upstage chorus (in black), standing when singing, sounded robust, well balanced, and well prepared by Brett Hodgdon. Its sound projected with real substance, with a particularly attractive tenor section sound, although its power sometimes overbalanced Santuzza. In the “Let us sing hymns” ensemble number, with its rising famous melody, the chorus and orchestra combined in a spectacularly moving and effective gradual crescendo, interpreted by the trio of dancers.

Tenor Adam Diegel began subtly with Turiddu’s “offstage” siciliana, here performed from the center of the darkened upstage orchestra, facing conductor a well-lighted David Angus at far stage left. His interpretation of the central bad boy (dressed in royal blue) started quietly but gained force and momentum after the powerful church scene and first two duets. His bright, ringing tone worthily partnered local favorite Michelle Johnson (a Grand Prize Winner of the Metropolitan Opera National Council Auditions), whose Santuzza (in bright yellow) dominated every duet she sang. While Johnson sang at her best works of the evening,“And I loved him” and “I am damned” laments, Diegel finally grabbed the spotlight during his drinking song, although he chose to interpret the piece as a series of very short, separated phrases, giving it a breathless, sectional lightness.

It was impossible to tear your eyes (or ears) away from Chelsea Basler’s Lola (clad in red). Since beginning her association with BLO as an Emerging Artist in 2013, Basler’s free, flexible soprano voice has been an important element of productions from Carmen (Micaëla, 2016), Handmaid’s Tale (Moira, 2019), and the recent Operabox.tv production of Phillip Glass’s The Fall of the House of Usher (Madeline). Her magnetic stage presence and broad, open legato approach to the role of the town flirt helped the audience to understand how Turiddu might be torn between two women.

Baritone Javier Arrey’s tragic Alfio (in purple and pink) contituted the discovery of the evening. Following a recent debut as Shaunard at the Met, Arrey captured the audience with his opening Prologue and brought new depth to his role in the Mascagni as a cuckolded husband. He chose to vary his timbre and volume throughout, adding surprising nuance to Alfio and making him a clearer victim of circumstance (in a way, a more equal dramatic foil to Santuzza).

Subtitles in English appeared on two large video screens in large block text backed by an opaque, black rectangle, over live closeups of the singers. While always easily read, opacity occluded a bit too much of the action. Translations proved helpful, but almost never continued during repetitions of text, so some longer (repeated) passages only featured video elements, without as clear a sense of the narrative.

Players
Principal flute Ann Bobo shone in the opening orchestral music; she brought intimacy to the orchestral response to Lola’s first scene. Principal trumpet Bruce Hall’s playing occupied a highpoint of the production: his seemingly effortless, soaring melodies in Alfio’s first aria and perfectly tuned work during the big alleluia chorus balanced well with Brendan Shapiro’s confident legato organ contributions. During those moments, the show completely transported the audience from a modern urban concert space to the inside of a southern Italian church service.

Harpist Amanda Romano Foreman’s playing came across with lovely delicay, although not as closely mic’d as the winds. The strings, led by concertmaster Annie Rabbat and principals Sarah Atwood (violin II), Kenneth Stalberg (viola), Meloanie Dyball (cello), and Robert Lynam (bass), played with excellent ensemble and flexibility. Their concluding music, supporting Satuzza’s final fall from grace and collapse, achieved powerful and emotion. The quarter arc facing stage left arrangement (rather than the usual half arc around a central point), provided a constant backdrop to the vocal soloists.

Thoughts from the Creative Staff
In reflecting on BLO’s return to full performances, Acting Stanford Calderwood General and Artistic Director Bradley Vernatter saluted not only the resilience of the company’s artists, staff, board and supporters, but also a shared belief in the power of music and storytelling: “The work required to pull off a production of this scale is monumental; it requires an accomplished team and a supportive community. I’ve been proud that BLO has kept artists employed through our digital projects and Street Stage performances during the roughest days of the pandemic. But it’s especially rewarding to provide so many opportunities for artists and production personnel to join us for our first full-length opera, with a complete orchestra and chorus for a live audience, since the pandemic

Dramaturg Cori Ellison reflects on the influence of this music on popular culture: “Cavalleria rusticana and verismo also made their way into American popular culture. In the climactic scene of The Godfather: Part III (1990) a performance of Cavalleria rusticana in Palermo, Sicily, with Michael Corleone’s opera-singer son Anthony as Turiddu, provides an ironic counterpoint to Vincent Corleone’s vengeance against his family’s enemies and an assassination attempt on Michael Corleone. The opera’s symphonic Intermezzo returns in the final scene as a backdrop to Michael’s lonely death. A decade earlier, director Martin Scorsese had also used the Intermezzo in the opening of Raging Bull (1980).”

More to Hear
Due to the venue’s larger capacity, BLO is presenting Cavalleria twice, instead of the previously announced four performances (repeating Sunday at 3pm). The upcoming BLO features the local premiere of the jazz opera Champion, mobile performances throughout the city on the Street Stage performance space, and the dramatic (online) Svadba (wedding) for six a cappella voices, directed by Shura Baryshnikov (season information HERE).

Boston-area opera lovers have many more live productions to look forward to this fall, including two next weekend (Columbus Day weekend): a double bill of Bernstein’s one act jazz opera Trouble in Tahiti and Menotti’s The Telephone in Concord next weekend (info HERE). Later October treats include a choreographed concert version of Jody Talbot’s new Path of Miracles by Boston Cecilia and ODC/Dance in Cambridge (info HERE), and two new operas livestreamed from the BU Fringe Festival: Kamala Sankaram’s The Infinite Energy of Ada Lovelace and Missy Mazzoli’s new opera Proving Up at the (info HERE).

Laura Prichard teaches throughout the Boston area as a certified K-12 teacher of music/dance/art, as a theater pianist (Winchester Cooperative Theater), and at the university level (Harvard Libraries, Bunker Hill CC, and formerly at Northeastern and UMass). She was the Assistant Director for the Grammy Award-winning San Francisco Symphony Chorus from 1995-2003, under Vance George.