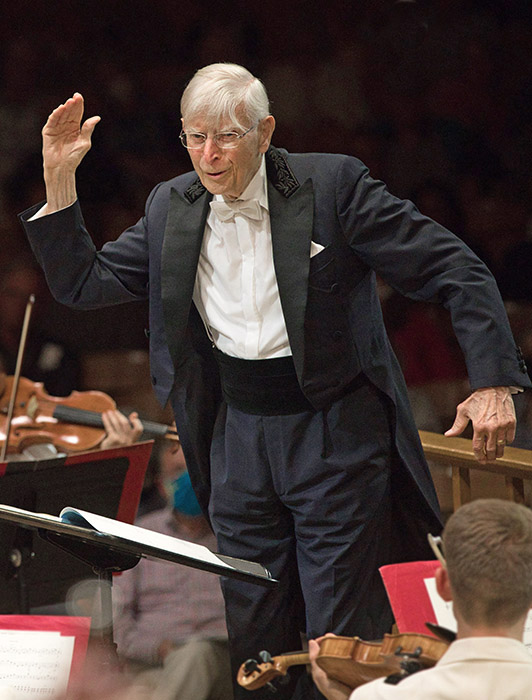 This year’s Leonard Bernstein Memorial Concert shared a late-summer idyll of traditional repertoire. Convening their penultimate shed performance of the season, the Tanglewood Music Center Orchestra under conducting fellows Kevin Fitzgerald, Adam Hickox, and finally by the venerable Herbert Blomstedt, delivered Mendelssohn, Mozart, and Brahms with individual skill, polish, and aplomb. At the summit―Blomstedt’s refined and memorable interpretation of Brahms’s Third Symphony. The evening notably showcased three different conductors in different stages of development, the one constant variable being their instrument: the supremely equipped orchestral fellows of the TMCO. Differences of conducting palette, character, and sensibility were unified by the major-minor underpinnings of the evening’s great tonal works for orchestra.

Kevin Fitzgerald led a playfully raucous performance of Mendelssohn’s Midsummer Night’s Dream Overture. Difficult to pull off from a cold-start, Fitzgerald and the TMC fellows traversed it with skill; minor mishaps in detail and nuance were unnoticed to an unsuspecting ear. A hazy beginning was assisted by the somewhat sleepy entrances of the winds in the famous introductory chords. Mendelssohn’s scherzando style emerged effortlessly with a burnished timbre from the upper strings, though the phrasing would have benefited from greater tenuto. The first fortissimo sounded a fantastic Bottom-braying guffaw from the grace-notes of the flutes, assisted by the trumpets. Fitzgerald’s direction suited the thumping sections of the music to great avail in his round, full gestures: a strength offset by too much motion in phrases of cantabile and legato. Pitfalls in subtlety were managed with grace by the sheer intuition of the TMC Orchestra fellows. Such a fine assortment of professional talent on Tanglewood’s stage!

The development transpired more through rhythm than harmonic mood; the espressivo-ritardando phrase before the recapitulation was conducted and played with profondeur. This moment suggested a possible musical homage by Schumann to his friend and mentor Mendelssohn: the end of the first long phrase of the Manfred Overture seems to quote this moment in the Mendelssohn (“There are more things in heaven and earth…than are dreamt of in your philosophy” — the “waking dreamer,” as-it-were.) The introverted conclusion earned immediate applause for a peaceful ending, in what would become a programmatic theme for the Brahms later in the evening.

Seating changed and the oboe sounded a brief tuning tone as Adam Hickox entered to lead an elegant, scintillating rendering of Mozart’s Symphony No. 31, Paris. The Allegro assai first movement benefited from Hickox’s exemplary Mozartian shaping, showing a keen awareness of the larger arch of phrases. The unison-string gestures of the development came as a real musical surprise, as the band and leader continued to demonstrate spectacular voicing, dynamic contrast, and control over Mozart’s orchestration. In what would become the evening’s leitmotif, just like the Mendelssohn, the Mozart reiterated major-minor harmonic oscillations for expressive and rhetorical affect.

Hickox traversed the Andante in 6/8 time and its serenade-like texture with masterful expressive facility, shaping the major-minor commedia dell’arte through both large and small beats; it is not so easy to keep the flow of an andante in this time signature without sounding sluggish or too fast! Here, all was balanced. Hickox’s direction matched the entirety of phrases, never registering as mere baton patterns.

The second violins led the start to the Allegro rondo finale with a typical canonic fugato that reveals Mozart “the erudite” rather than “the fool,” as portrayed in Amadeus. The return of the rondo theme after this contrapuntal meandering was especially well marked. In Hickox, we enjoyed a consummate, well-mannered musician of skill; all was elegantly rounded in both physical and musical contour.

Brahms Third Symphony: When I hear these three words, a whole world comes to my mind: rich, full of meaning, enticing – and ambiguous. But first, a funny remark by my old colleague Hans Schmidt-Isserstedt in Hamburg:

All the other Brahms Symphonies end triumphantly in fortissimo. Irresistibly, applause ignites. But after the pianissimo of the Third ― silence.

But silence is the ultimate happiness. We love action ― even stirring fights, when they occur at a safe distance. But at the end, what we long for is peace. Pianissimo. Brahms knew it. And in Brahms 3, even all four movements end pianissimo. Wonderful.

It is not often one hears Brahms’ least-often-played symphony, No. 3 in F Major, let alone to hear it interpreted at the expert hands of the oldest working conductor with an orchestra of some of the most pliable young professionals in the world. Just recently turned 94, Herbert Blomstedt is a paragon of clarity and stamina [see Deutsche Welle interview]. Other reviews and pieces on this publication give a thorough perspective on this conductor, his character, and his lifetime of expertise in classical music [more HERE]. For this review, I contacted Blomstedt, who composed a thoughtful piece, both reflective and deeply analytical, on the Third. Echoing a similar interview he had done for the Concertgebouworkest in 2013, the Tonkünstler revealed an expert insight on this ingenious symphonic masterwork.

It opens with the evening’s major-minor leitmotif. Boosted by Blomstedt’s rendering of a Furtwänglerian crescendo in the minor chord, second bar, the strings were launched into the subsequent FAF theme (“Frei aber Froh” – Free but Happy). We were in the presence of a master. Direct, with a restrained Romantic sentimentality, Blomstedt shone through his minimalistic use of gesture. Clearly, he needed only the bare necessities, the score left closed. Solo clarinet and woodwind solos in the second theme interwove with fine Romantic tone. Dynamic contrasts added a sumptuous chiaroscuro, only intensifying the burning drive of the movement. The intensity of rhetorical musical repetitions caused Blomstedt’s baton-less hands to quiver with anticipatory excitement. The youthful orchestra responded in kind. Forward motion held firm as the development sounded with appassionato modulations. Though motoric drive made for stiff tempi fluctuations, a gorgeous horn solo/duet played unhindered before the poco sostenuto and recapitulation. As the conclusive excitement of the movement built before the final coda, trumpet staccati bleated with too much force of tone, making for a somewhat lopsided effect.

“The second movement is in C major, as clear as fresh mountain water.” A simple call and response between winds and strings created a truly evocative sound-painting. Yes, flowing water ― emblematic of those Rhenish hiking excursions Brahms frequented in Wiesbaden, where this symphony had its genesis. Moments of rhythmic variation were traversed with a prescriptive quality, most notably in the three-against-two at rehearsal D: a moment best captured in Furtwängler’s profound 1949 live performance.

As the second movement’s final chord lapsed into silence, Blomstedt proceeded almost attacca with the happy-sad melancholy of the dance-like third movement: “Am I sad, or am I happy? Both! And where is the downbeat really? On “one”, or on “three”? Nowhere ― it is all up in the air, weightless. Like a wonderful dream.” The low strings shone with their legato theme, equally matched by the passing instrumental and section solos of the same melody hermetically woven throughout the orchestra.

Blomstedt proceeded with the finale in the same way as the third movement, nearly attacca. The mysterious introduction gave way to the driven body of the movement, announced by the brass. Playing with rotary valves, as in European orchestras, the trumpeters ended up sounding more American, making the shock-transition one of sharpness rather than ominous roundness. Blomstedt’s control of stable, though fast-paced, tempi in this movement made for a burning hot ardour ― the Beethoven Five rhythmic churnings in the horn were clearly articulated.

The development came as a revelation; the themes from the whole symphony created a composite fugato, one that was motivic rather than strictly polyphonic: “Aha ― Brahms is going “modern,” mixing the movements! Are we not in the Finale, or are we back in the second movement? Ambiguous again. The whole orchestra protests ― up to fight!” Muted strings illustrated a mystical transition from the “fight” of the movement to the setting-sun farewell return of the FAF motto theme that opened the work. At the dénouement, the chorales and melodic returns meandered beautifully.

Of course not. On the contrary―this is the music we need right now. Music that lets us experience again all the struggles of real life, but at a safe distance, remembering that there still was meaning everywhere, even when it was most painful, and that peace is within reach.

In these perplexing times music comes to its ultimate meaning, sending light into the depths of our soul. Telling what needs to be said, but that no words can express.