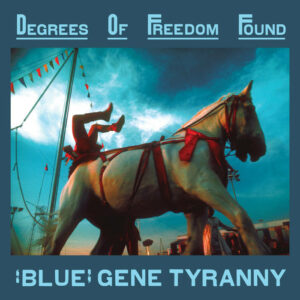 Composer and pianist “Blue” Gene Tyranny passed away in December 2020 of complications due to diabetes. The boxed set Degrees of Freedom Found, a generous six-CD compilation of tracks from 1963-2019, was already in the works and contains liner notes by Tyranny. Thus, it is an endorsed release rather than a posthumous archival grab.

He was associated with a number of prominent musicians, Robert Ashley, Carla Bley, Bill Dixon, and Iggy Pop, whom he joined on an early tour of the Stooges. Most viewed him as a generous collaborator. Ashley, in particular, afforded Tyranny a considerable amount of freedom in crafting the music he played in the opera “Perfect Lives (Private Parts),” in which he enacted the role of Buddy, the world’s greatest piano player.

Like Tyranny’s talents, the boxed set is eclectic in makeup and it is curated roughly by category rather than chronology. The set begins with selections that highlight the extraordinary pianist he was, with a warm touch yet fluid dexterity. The stylistic incorporations of the music, even within a single work, is wide-ranging throughout. Thus, one can be in the midst of listening to a minimalist-inspired piece and suddenly swerve through blues or honky tonk pianism. His detractors took this to be undisciplined and digressive, but appreciators knew better that the amalgamations the pieces underwent were intrinsic to their design.

If one dipped into a later disc first, they might get the impression that Tyranny was more interested in synthesizers, chamber orchestra, jazz, or theatrical vocal works than solo piano: all are here. The performance dates range from 1963, when the composer was still in Ann Arbor, to later presentations in Montana, Massachusetts at Jacob’s Pillow, Philadelphia, and a number in New York, which became his longtime base of operations, culminating with a valedictory piece featuring winds from 2019, titled “The Forecaster Hopes.”

Some of the included works are aphoristic, the length of pop songs. Often the most evocative all too quickly vanish. One piece, “Meditation” for trio and chamber orchestra, is spliced together (seamlessly) between two performances thirty years apart. There are also large-scale pieces, such as Tyranny’s epic monodrama “The Driver’s Son,” the half-hour long piano work “We All Watch the Sun and the Moon (for a Moment of Insight), and “Barn Fever,” a substantial synthesizer piece with a rollicking groove and fiendishly fleet soloing.

Degrees of Freedom Found is a substantial amount of music, but a deep dive into Tyranny’s work is amply rewarding.