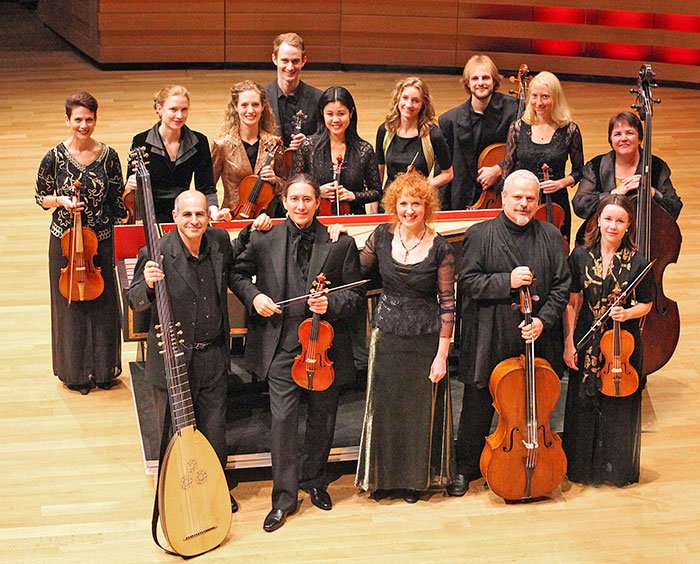 In its 30th anniversary season under Artistic Director Jeannette Sorrell, Apollo’s Fire ― aka the Cleveland Baroque Orchestra ― remains dedicated “to the baroque ideal that music should evoke the various Affekts or passions in the listeners.” Sorrell invited us to appreciate the similarity between Gottfried Zimmerman’s coffee-garden in 1730s Leipzig and Tanglewood’s festive, relaxed, forest-garden-like ambiance. Our host, she explained, was really J.S. Bach, leading his student performers of the Collegium Musicum in works by Telemann and Vivaldi, and some of his own music as well. Friends gathered to perform for the sheer enjoyment of it, but also brought us the divine fire of the Sun-god, illuminating our emotional depths.

Retrieving Telemann’s distinctive voice from underneath Bach’s shadow takes an incredibly special gift and Apollo’s Fire succeeded beautifully, revealing a probing and experimental composer. Telemann’s Concerto Polonais commenced with an elegant and gracious Dolce, full of sweetness but rich with opposing emotions, joy and melancholy vying with one another like smoldering flames beneath the decorous formal surface. The ensuing Allegro galloped and raced with verve, leading to a fiercely accented trio section, and shaped to great cathartic effect by Sorrell’s eloquently expressive dynamics. The third movement Largo, a high-stepping, gently paced polonaise, brought out Telemann’s fascination for the “barbaric beauty” of Polish folksongs through a bold quasi-syncopation, alternating a march-like vigor with all too human moodiness. In the concluding Allegro, beautiful rich sound enhanced by William Simm’s theorbo evoked a torrent of swirling eddies dipping suddenly into a mysterious enthralling minor key à la Vivaldi. Apollo’s Fire brilliantly brought out Telemann’s mastery of combining styles: gemischter Geschmack.

Concertmaster Olivier Brault joined principal violin Emi Tanabe in Sorrell’s arrangement of the famous aria “Alto Giove” from Porpora’s Polifemo. As the ensemble rendered the soulful introduction Tanabe entered from stage left and took up the aria as Aci,  after having been killed by Polyphemus, was turned into a river by Jupiter to mingle forever with his love, the nymph Galatea. Answering Tanabe’s elegant singing voice, Brault as Galatea joined in a duet filled with longing and sadness giving way to solo conversation and fading away to a departure off stage. Without pause, a brief transitional passage led to the Sorrell arrangement of Vivaldi’s Ciaccona, the last movement of his Concerto for Strings, RV 114. Daphna Mor, recorder; and Kathie Stewart, traverso, backed up solo violinists Alan Choo and Holly Piccoli in a plaintive episode leading to a joyous finish.

Four violin soloists took center stage in the tenth work of Vivaldi’s L’estro armonico, the B Minor Concerto, RV 580, as Tanabe and Andrew Fouts joined Brault and Choo. Aided and abetted by their companions, the four violinists, seemingly competing in their brilliance, gave us a distinctly decisive, youthful Vivaldi, marked by strong, sharp accents torn from the strings on the beat alternating with a sweeping rush of 16ths and dramatic variations in dynamics. I was struck by how effectively the period instruments, most especially René Schiffer’s subtle cello, created texture; not this, the overly slick and unsubtle Vivaldi that one so often hears. Not only did the Corelli-like passages of the Largo cast deeper spells for their textured undercurrents, but also, the period instruments gave the Philip Glass-like motoric passages a marvelously modernist resonance, both in the Largo and in the final Allegro.

What “Affekts” stirred? Fully attuned by now, I heard Vivaldi’s Concerto for two violins Opus 3, No. 8, as a pleading duet of self and soul that Fate engulfs and sweeps away. Olivier Brault and Alan Choo brought their tones to a paroxysm of emotional expressiveness, revealing Vivaldi as a master of the aesthetics of the ephemeral― that Wordsworthean “spot of time” that rises like a flame into the summer night before being carried away forever.

Played without intermission this summer, Tanglewood concerts can maintain a pitched intensity. The musicians paused briefly to tune their instruments (high humidity and a few drops of rain in the green wall of trees beyond the shed) and embarked on Bach’s 4th Brandenburg Concerto, “which was almost certainly performed at Zimmermann’s coffee-house garden,” Sorrell gleefully reminded us. Abut to hear such a well-known war-horse, one cannot help but feel trepidation. Apollo’s Fire made it as fresh as its premieare. Rather than smoothing all individual differences and creating a monotonous united front, the tutti played like a rambunctious “band of brothers,” infusing the opening Allegro with a swift momentum full of rumbling shadows. Against this richly problematized background, Daphna Mor’s and Kathie Stewart’s recorders sparkled brightly like the Sun’s fiery darts into the heliosphere, lifting our “Affekts” high above earthly humors and miasmas, purifying our soul from memories of confinement, setting us loose into the ether. The ensemble interpreted the second movement Andante in E minor as a “poetic conversation” (Sorrell’s words) ― tender, intimate, with Brault’s volin bold enough to be vulnerable, emotionally exposed, and Mor’s recorder virtuosic in solace. The final Presto, a triumphant counterpoint explosion, came across as a masterful masterful eruption of dissonances without the slightest loss of a breath-taking momentum, punctuated by the extraordinarily bold sound of Brault’s violin; it reached a rarely achieved level of excitement. Realizing thatt that the audience was riveted, the players returned the favor with unbridled delight.

Since no one felt like leaving and all were clapping madly, Apollo’s Fire treated us to an unexpected encore, one thematically and “affectively” tied to Zimmerman’s coffee-house, to Telemann’s “gemishchter Geschmack” and more generally to 18th-century Leipzig, when all things Turkish were in fashion. Longa Nahawand, a rousing Turkish instrumental dance (longa) in the melodic mode nahawand, featured brilliant improvisations by Daphne Mor, then by Emi Tanabe, capping the evening with “barbaric beauty.”