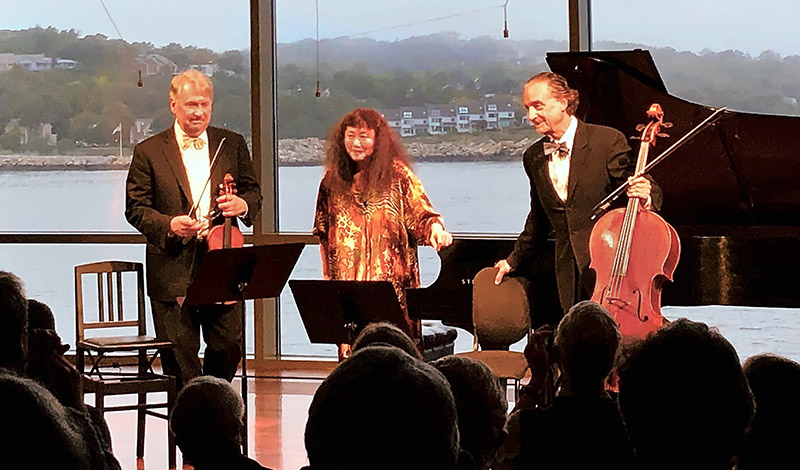 Few ensembles can induce me to embark on a three-hour round-trip drive, but the Han-Setzer-Finckel Trio absolutely did yesterday.  In Beethoven’s “Ghost” Trio, Op. 70, No. 1, and Dvořák’s “Dumky” Trio, Op. 90 at the Rockport Chamber Music Festival, Wu Han (piano), Philip Setzer (violin) and David Finckel (cello) treated us to a brilliant display of consummate and refined musicianship, down to earth and without pretense. Mere technique became invisible. Not an iota of self-consciousness or of jadedness marred the directness and freshness of their sound. Nothing stood between the three musicians and the création of the music.

A comment from Czerny in 1842 that the dark and ominous Adagio movement brought to mind Hamlet’s ghost inspired the nickname, although Beethoven’s sketchbook shows passages from the trio on the same page as sketches for the witches’ scene from an abandoned opera of Macbeth. Whatever the motivation, Beethoven’s Op. 70 marks, as Lewis Lockwood puts it, “new ways of thinking about ensemble sonorities altogether.” Composed in 1808, the same year as the Pastoral symphony, Beethoven’s Geistertrio is monumental in scope, overwhelming in emotional content and, if played with sufficient alertness and depth, as it was on Friday, powerfully redeeming.

Han, Setzer and Finckel brought out the sheer excitement of the opening unison by forcing it to burst out dramatically—fast and uncompromising, (“O uncontrollable!” Shelley might say) yet enigmatic, urgent, suspenseful, like a towering question that no answer will settle. The contrasting lyrical theme in Finckel’s cello, rich with emotional poetry, prompted dark rumblings in Han’s piano and a clear-headed, focused response in Setzer’s thoughtful violin; a great wind with a swift, liberating momentum impelled all three forward. Their utter fluency with rapidly shifting moods and strong contrasts created a complex, highly expressive, at times even heroic unfolding of human fate, with the piano and cello yearning to expand limitlessly, but subtly kept in check by a lucid, implacable violin. The coda made an assertive, strong, bold statement. No false amor fati here! Just stark, unforgiving truth. Oh, this life is indeed beautiful, but for me it is poisoned forever.

The second movement “largo assai e espressivo” started with solemn brooding and conveyed the wrenching grief and helpless protest that we can feel about inevitable loss and physical demise. Han, Setzer and Finkel eloquently used dynamics to create layers of sound converging relentlessly from opposite directions to engulf us and force us into the abyss. Beautifully attuned to each other in this movement, their exquisite phrasing led us through a slow personal disintegration to the outer limits of existence where fragmentation triumphs and sound is extinguished. Beyond the ghostly rattle of the deceased, silence became a deafening, loud, despotic and inexorable fourth voice in the score.

The third and last movement, marked presto, came as a progressive but increasingly jubilant return from death to the cacophony of the living — to the great vibrating rhizome of life: boisterous and varied, synergistic and contradictory, libidinous and capering, disordered and indestructible. Something of Beethoven’s “childish excitement” upon returning to the countryside and entering the “enchantment” of the forest (Beethoven’s own words) now surrounded us with something like new growth, promise. True, Han’s delicate, brief, spectral piano solo reminded us that death remains coiled inside of nature like entropy, but violin and cello gently overcame the ghostly hint to emphasize the radiant discovery of the moment:  the delight of being able to be delighted (It seems as if every tree in the countryside spoke to me saying, “Holy! Holy!”). Now more and more vertiginously integrated, the three instruments merged to embed the leading theme into its own dense background, blurring borders to create a robust, entangled bank of sound, impulses, possibilities, joy. The recapitulation sounded positively ludic and the coda brought skipping and dancing, creatures of the woods and perhaps of Prometheus, resurgent in spite of it all. For surely woods, trees, and rocks give back the echo which man desires to hear…

If Beethoven’s Geistertrio reached out to woods and rocks for rebirth, Dvořák’s “Dumky” Trio, then, exploits the folkloric “dumka” to propose a cathartic approach. By Dvořák’s time, the dumka had evolved from an epic ballad representing great and tragic events into a single-movement genre alternating slow, melancholy episodes with fast, manically exuberant ones – essentially depicting two faces of grief. Composed shortly before Dvořák’s trip to America, the Op. 90 piano trio features six dumky, yet it combines them into a traditional four-movement piece by indicating that the first three must be played attaca subito, without interruption. Han-Setzer-Finckle architected the piece from start to finish with an urgent, forward directionality, so that the cathartic moments along the way culminated effortlessly into the fierce liberation of the finale.

With subtle and dramatic shadings of dynamics, color and texture and, once again, through exquisite phrasing, Han, Setzer and Finckel gave surprising variety to the alternation of melancholy and frenzy. In the three continuous dumky, melancholy seemed to call out to heaven above and to buried ancestors below for resources of resilience — which materialized to answer benevolently, erupting into joyous dances as though proclaiming “we are here! Near you always and ready to purge you of discouragement!” Bohemian “deities of place” (as the philosopher Levinas calls the distinctive attributes of a landscape intertwined with a people) soothed grief and loss by inviting them into a perennial celebration of forgetting, but not without acknowledging human hardship. In the Fourth dumka, Han, Setzer and Finckel nicely took the time to bring out the feeling that collective joy pays homage to the private tragedy that gives it both meaning and force. After a wonderfully modernistic, bitter, self-deprecating, scherzando fifth dumka with brilliantly “soiled” colors and rustic accents in the strings, the final movement led once again from the majestic beauty of deep lamentation (lento maestoso) to an unbridled and defiant frenzy (vivace), purging the whole audience of almost two years of abated spirits in a fierce and visceral renewal of vitality.

Lest we returned to the street overly confident and prematurely purged of angst, a gracious encore pacified us. The serene andante of Mendelssohn’s first Trio, in D minor shone with a sweet evening light, but, as always, Mendelssohn remained subtly aware of shadows to come, while treasuring a private clear watering of tears.