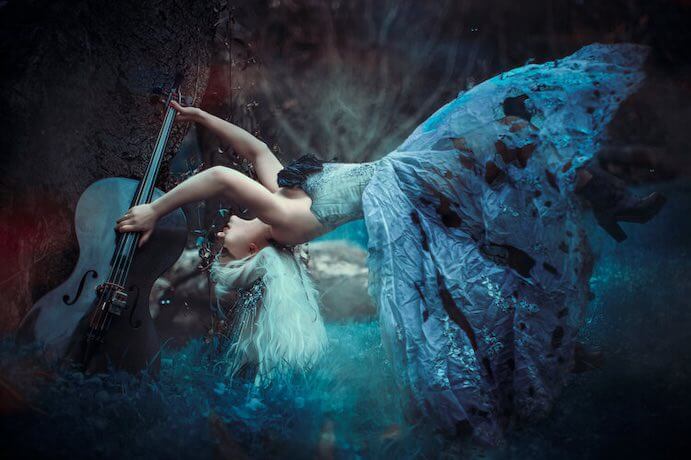 Musical styles collide in a fairytale for the modern age in Cellista’s Pariah — an immersive audio album that fluidly weaves together classical, pop, and hip-hop elements to create a new dialect. Pariah is one of the most ambitious collaborative new music projects to come out of the COVID-19 pandemic with eleven performers, five composers, five lyricists, and an enormous production team. Recorded at East West Studios in Los Angeles and mixed by Skywalker Sound, listeners can look forward to this enchanting soundscape on October 1, 2021.

Cellista is a Los Angeles based cellist and performance artist whose work emphasizes narrative, multi-media, and cross-genre collaborations. On Pariah, she joins forces with composers Mazz Swift, Peter Colclasure, Brietta Greger, and Joshua Icban. The self-released operetta, presented as an album and live dance film, takes the listener on a journey through Pariah’s banishment from Cloture, a fictional city whose residents punish Pariah for her passion for truth and justice. The mesmerizing album starts with Peter Colclasure’s Debris Field (Grand Mal), encapsulating the listener in a soundworld marked by ephemeral melodies formed by electronic samples and a distant piano. The multi-textured electronics open as the narrator, Dawn L. Troupe, introduces the audience to a pearl of prophetic wisdom reprised at the end of the fairytale: “Without gaps in time, no distinct time could ever be given. No truly new day could ever dawn yet again, without the gap of the night between one day and another.”

Whispers of “Pariah” over the delirious piano create a dreamscape that sonically defines the entire album. From there, Joshua Icban’s somber guitar playing sets the mood as the narrator colorfully describes the fortress city of Cloture, and how Pariah’s magical hazel eyes produce a “truthful reflection of themselves” upon those who gaze at them. As a result of this power, Pariah “always felt the call to protest injustice,” and this call leads to her banishment from Cloture.

Following Troupe’s introduction, Demone Carter’s deep and weighty voice brings the character of Poser, Pariah’s love interest, to life. Where the narrator tells the story from an outward perspective, Poser shares the inner emotional turmoil, desolation, and solitude that comes with being a pariah. The song ends with Cellista playing a provocative melody on the cello, accompanying vocalist Hilary Whitmore as Pariah, whose honey-sweet tone sweeps the listener away to a weightless moment in the music, which could have only been made more effective if her diction were clearer. The operetta’s plot thickens as the narrator tells of Pariah’s violent removal from Cloture in Brietta Greger’s The Banishment. As Troupe displays the fierce drama of the story, she is accompanied by a drum that may remind the listener of Berlioz’s March to the Scaffold.

Beatboxer Julia Ramos (a.k.a. Track IX) and Carter take the stage in the third track, Pariah. Cellista’s highly effective combination of beatboxing, rapping, a distinctly classical vocalist, and a rock-influenced electric guitar come together to establish a complex, layered sound that defines Cellista’s style. Cellista’s other compositions on the album, Small Prophecies and Dawn Chorus, are intense, yet not as melodically rich. Small Prophecies uses delays, sampling, and exceptional orchestration to create a pressurized, multi-textured sensation. Dawn Chorus lacks this effective layering of instruments, samples, and effects, instead featuring a sparse (and somewhat aimless) melody on the cello. This criticism aside, Cellista’s sense of harmony and deep understanding of electronics still entice the listener on these tracks.

Joshua Icban’s Pretend is a beautifully electrifying work that reels the listener towards the short love story that lingers throughout the tale. Brietta Greger’s percussion provides non-stop stimulation that only grows as Pariah and Poser develop their relationship, but just as the sparks begin, they also vanish. Pariah fixates on the story of a single person, but a small army tells the fairytale. One of the most impressive aspects of this saga is how composers Peter Colclasure, Brietta Greger, Freya Cellista, Mazz Swift, and Joshua Icban crafted their own pieces that fit into a much larger puzzle. The resulting album is not a conglomeration of seven works by five composers, but one coherent operetta made by a unified team.

Pariah is a story that is both timeless and of this moment. Throughout history, those in power have used disinformation and blatant lies to maintain an order that benefits their power. Pariahs are society’s antidotes to that order. They are characters found throughout history, literature, and religions — truth-seekers who challenge injustice and face punishment for their activism. As the world continues to rotate towards a crossroads where one side is a continuation of capitalist ecocide, and the other is a paradigm shift towards fulfilling the needs of people, one fact remains clear — we need more truth-tellers like Pariah.