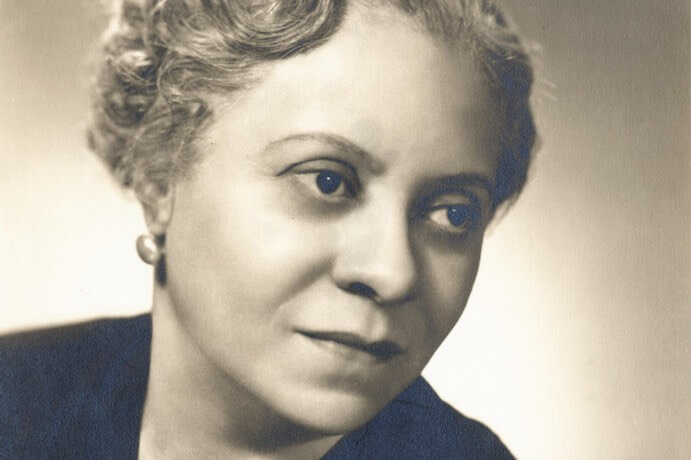 When I was a kid, I thought my sister and I were the only Black people playing violin in Cincinnati, Ohio. We weren’t — but my musical environment didn’t prove me wrong. The classical music books I read feverishly showed me that this tradition was mainly white and male. Most of my classmates were white; most of my conductors were white; most of the audience members were white. It was a reality I accepted — until I learned it was not the only reality.

As I poked through libraries, I read the biographies of Samuel Coleridge-Taylor and William Grant Still. I listened to the music of Joseph Bologne, the Chevalier de Saint-Georges; I played the music of Florence Price. I studied the meeting minutes and writings of the National Association of Negro Musicians (NANM), the oldest active Black-founded music organization. I met and collaborated with fellow Black classical musicians and scholars. Like the origin of the universe, my world expanded. I was part of thousands of Black folks, past and present, who played and created classical music. Ours was a musical practice that was global and centuries old. In the wake of the murders of George Floyd and Breonna Taylor by police; the massive protests calling for an end to police brutality and racism; and the increase in anti-Asian violence and racism during the COVID pandemic, music schools, professional organizations, and ensembles released statements pledging to diversify their programming, to ensure their spaces were anti-racist and anti-xenophobic.

This increase in airtime shone a light on the many methods of exclusion in classical music today. In a post-Brown v. Board world, segregated music halls for audiences and performers are still a reality. The pros and cons of blind auditions are still debated. Black and Brown opera singers remain pigeonholed by white directors’ “preferences” and “personal tastes” that continue to prioritize white voices, white faces, and white bodies. And Asian representation in classical music does not mean the artistic ecosystem is equitable or devoid of racist interactions.

These practiced and exclusionary actions, whether conscious or subconscious, have become second nature, keeping classical music insular and very, very white. They reinforce white supremacy by presenting inequity as “just the way things are” — the result of individual choices rather than systemic practices. Which has led some to declare that there is no discrimination in classical music. But there is. We Black, queer, Latinx, trans, bi, Asian, and Indigenous folks know this. And we know there are practiced actions that can redress this gross injustice. This is where Diversity, Equity, Inclusion, and Access (DEIA) enters the picture.

DEIA and the related EDI (Equity, Diversity, Inclusion) began to populate public statements from arts orgs, ensembles, and schools in the summer of 2020. In name and purpose, DEIA undoubtedly draws concepts from affirmative action. But what makes DEIA different is its focus on racial and gender equity AND restructuring of the professional environment. In our musical spaces, access must be equitable and inclusive, which helps increase the diversity of who is programmed in that space, who regularly attends concerts in that space, and who oversees administrative details of that space.

As a communications specialist for ArtsWave, a non-profit arts organization, I’ve become even more cognizant of the importance of DEIA, how it can be applied in the workplace, and how it can diversify who receives arts funding. I have learned that DEIA initiatives require more focused, long-term planning to be effective. And that more people need to bridge the disconnect between awareness of inequity and taking actions to dismantle it.

In 2021, the League of American Orchestras released their EDI guide to outline this difference between awareness and action. One powerful example was their discussion of blind auditions. While they have changed the gender balance of US orchestras, Black orchestral musicians still make up less than 2% of orchestral membership in the US.

Because direct invitations to final rounds of auditions are typically given to those already in the system, and white peoples’ professional networks are overwhelmingly white. Such reinforcement of white patriarchal dominance communicates to Indigenous people, people of color, and white LGBTQ people that they are not welcome in that space. Even if that’s not the organization’s intent.

Access must be equitable and inclusive, which helps increase the diversity of who is programmed in that space, who regularly attends concerts in that space, and who oversees administrative details of that space.

A McKinsey & Company survey, quoted in the League’s EDI guide, found that “39% of all respondents reported that they have turned down or decided not to pursue a job because of a perceived lack of inclusion at an organization. [White] LGBTQ+ and racial or ethnic minority respondents were more likely than others to report choosing not to pursue a job for this reason.”

Think of the Black, Indigneous, Asian, Latinx and white LGBTQ candidates who don’t apply because an organization’s programming, collaborations, and sponsorships say, “You’re not welcome.” And even if the optics are better (e.g. more frequent programming of historically excluded composers and performers), that does not mean the professional environment has been reconfigured for equitable and respectful engagement across, race, gender, and sexual orientation.

Many of the anti-racist, DEIA dedicated statements of last year drove home this latter point: words devoid of actions are more ideological aspiration than action plan, especially in predominantly white spaces. “The concepts of diversity and (especially) inclusion, while formidable and vital to arts ecosystems, require a continuation of white-centric culture, perspectives, and power dynamics,” observes Garrett McQueen, bassoonist, scholar, activist, and co-host of the Trilloquy podcast. This white-centric approach to DEIA is frequently seen in the programming and marketing of historically marginalized composers: discovered, exceptionalized. But despite what this narrative would have you believe, Black and Brown artists’ absence from frequent and consistent programming is not an issue of a lack of qualified performers and composers. Yes, there is a pipeline issue at the national scale due to cuts in arts and music programs and systemic disparities in public vs private school. But there is also the issue of white programmers, music directors, and soloists not looking outside their predominantly white networks for music that is new to them, whether the work is 200 years old or 12 months old.

“There’s a lot of short term thinking in the classical music world…always has been,” says Elizabeth de Brito, Founder and Executive Producer of The Daffodil Perspective podcast. “There isn’t a problem of not having enough. I program 50% Black and Asian composers on every show, and I often think of how to fit this all in. DEIA requires constant consideration…It’s about doing a lot of research, because the information is not [always] easily accessible. This kind of thing needs to be funded. [There’s] so much tokenism: they’ll play women composers on International Women’s Day, but that’s not equality. Experts like myself would like to work full-time to craft better programming, better seasons. Without our knowledge, without a strategic plan, it’s paying lip service.” In addition to genuine investment from white allies, DEIA initiatives also require solidarity amongst musicians of color. A recent tweet from Jerrell Jackson, double bassist and digital content and creative manager at the Marlboro Music Festival and Philadelphia Chamber Music Society, pointed to this lack of consistent organizing via the fact that a professional, pay-at-scale, year-long performing orchestra for Black and ethnic minorities in the vein of Chi-Chi Nwanoku’s Chineke! has yet to be established in the United States.

“Most of us on the other side of the pond assumed we’d have the American version of this,” says Jackson, “ but there doesn’t even seem to be any promise of something like that happening in the States. I don’t want to say this can just happen anywhere, because Chi-Chi [Nwanoku] is a brilliant administrator. But you think in a place that has more musicians, more concert halls, that it would. So it begs the question as to why it hasn’t happened yet. There’s twice the amount of Black, Asian, and Indigenous musicians here, which brings me to a lack of solidarity amongst us…and it prevents us from doing what we need to do to lift each other up.”

The most effective DEIA initiatives are those that not only target but engage with the rich, varied, and ever changing creative work of Black, Indigenous, Asian, Latinx, and white LGBTQ peoples and the intersections of these communities. For some music organizations, a DEIA statement was not the precursor to change, but an opportunity for white arts leaders to articulate their existing approach to programming and community engagement.

“CAP UCLA has been in connection with Black and Brown communities as a way of being for some time,” shared Kristy Edmunds, executive and artistic director of the Center for the Art of Performance UCLA. “At the Center, we are a rather complex mash up of diversities (immigrant first generation, Indigenous, Asian, blue collar, gay, trans, female, Jewish, Muslim, and Black and Brown). We are not Black owned and Black led – which makes us  ‘predominantly white’ – and this is how, in part, the DEIA process is making good trouble. Creating a DEIA initiative for us was about articulating what we were long practicing as an organization that suddenly required an unassailable and accurate statement. That caused us to further question, interrogate, and challenge our relationship to what we were organically doing and boil it down differently, and at the same time, ensure the goal was not a Statement, but rather a commitment to process and change – undoing and re-approaching the systemic facts.”

Jackson sees such commitment to continually grow and evolve from the Philadelphia Chamber Music Society. “Live streams will continue indefinitely and are a pay whatever you want model. There were folks, mainly Black and Brown folks, who hadn’t attended, or never felt welcome in the concert hall, who used this service. And it’s still high quality content. Everyone has the same concert experience.”

These tangible actions are essential to enacting systemic change through DEIA. To simply believe in DEIA and to support DEIA mentally is not enough. It requires different methods of access (e.g. live streaming concerts); supporting a diverse workforce through equitable hiring practices (e.g. CAP UCLA); and centering the musical and cultural worlds of historically marginalized artists (e.g. The Daffodil Perspective and Trilloquy). It consists of growing pains, learning curves, new collaborations; hours, days, months, and years of research and knowledge accumulation.

DEIA is not the work of snowflakes. It is the work of exasperated and dedicated Black folks; Indigenous folks; Asian folks; Afro, Asian, & Indigenous Latinx folks; white trans, queer, bi folks; and our white allies. For DEIA to be effective, we must reconfigure how we understand classical music history, performance, and community. It requires focus, dedication and funds. Rather than restricting those of us in the classical music world, DEIA opens us up to a vaster, richer creative world than some of us have known before. And most importantly, it allows more historically marginalized artists, past and present, to consistently get their due. There is no one way to do this; but the key is to do it.