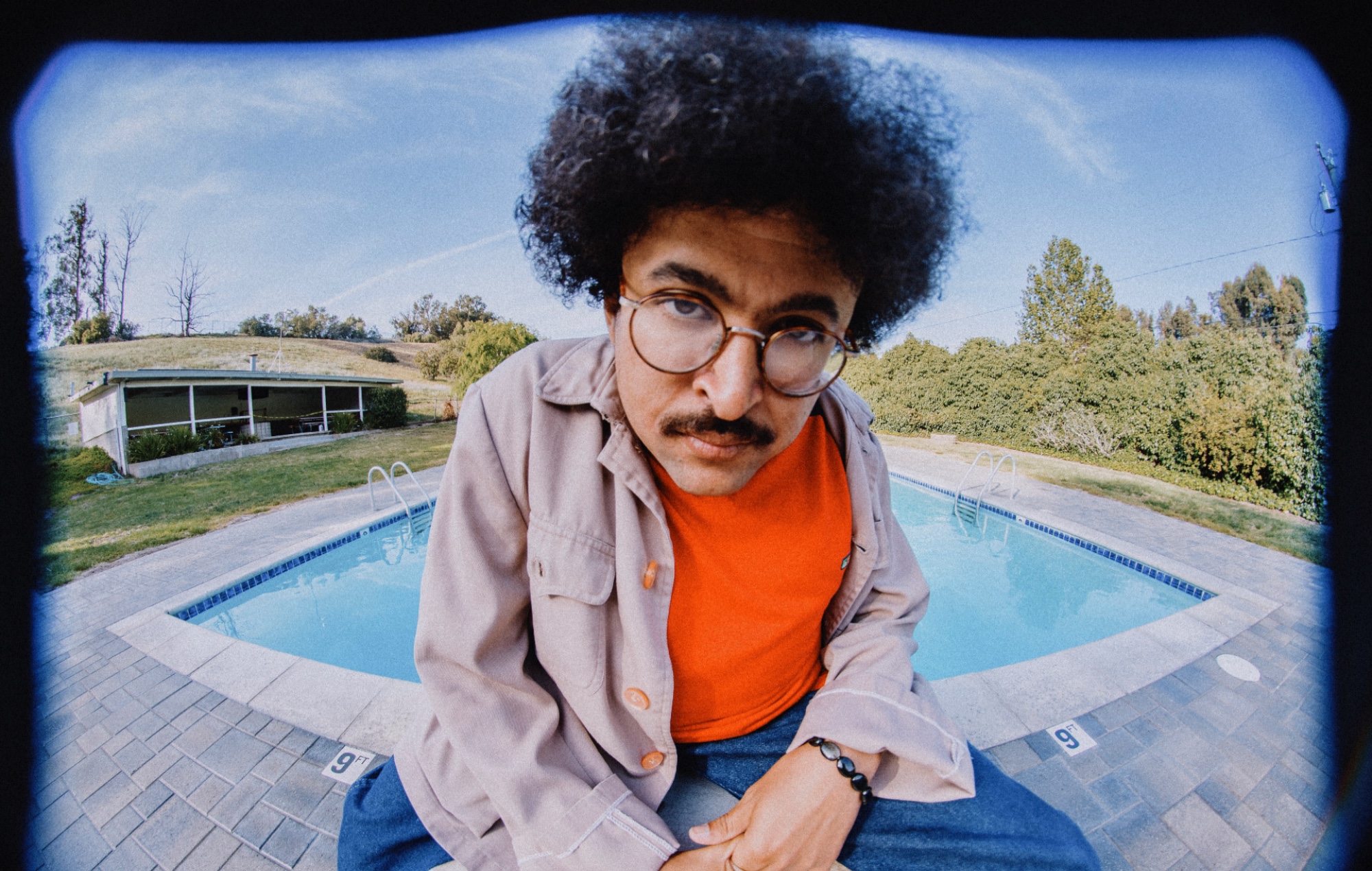 Cola Boyy, aka Matthew Urango, has just finished his morning coffee at home in California when he greets NME on video call. He was up late, he says, preparing for an upcoming trip to Paris in just a few days time. His debut album, ‘Prosthetic Boombox’, may have only just been released, but he’s heading overseas to record a bunch of new songs in the same studio where part of his breakthrough EP, ‘Black Boogie Neon’, was made.

“I was also in Paris, funnily enough, when my last EP came out,” Urango smiles, reflecting on the release of that in 2018 and on the “crazy busy” years between then and now which has seen him split his time between Oxnard, California and Montmartre, Paris. “Right away, I was in the studio already, working on new stuff when the EP came out and that was the beginning of this album,” he beams, proud of his debut which he says is a bit like being in “a time travelling DeLorean with Prince in the passenger seat.”

It’s an appropriate description of ‘Prosthetic Boombox’ which is a bold step up from his EP. It’s retro leanings takes the best of 80’s dance, funk and soul and puts them through a playful pop filter. It’s also experimental too, leaning towards the cool, electro disco sounds of recent Parisian acts like L’Impératrice and La Femme. Signed initially to renowned French record label Record Makers (the label who first signed electro-pioneers Air), their influence still feels apparent: Air’s Nicholas Godin even makes an appearance on the record.

“Going back and forth between California and Paris was really cool,” Urango says. “I think it’s added another factor to the music that I think makes me stand out a bit.” Another standout came through his eventual signing to MGMT’s record label in the US. Their lead singer, Andrew VanWyngarden, also appears on poignant album closer, ‘Kid Born In Space’. He’s become a frequent collaborator with Urango in recent years.

“My EP was collaborative and this project really continued on from that,” he explains. “I love working with others and I love putting other people’s ideas, skills and abilities into my songs because I’m just one dude, and I can’t play the damn trumpet,” he laughs. “There are a lot of things that I can’t do and I don’t have such an ego that I want it to all be about me. I welcome people to help out and honestly, the fact I’m working with Nicolas, Andrew, The Avalanches – like three years ago, I would never have believed that. The fact they’ve become my friends too: it’s just crazy!”

Despite Urango’s genre hopping and various collaborations, this is still a distinctive Cola Boyy record, especially when it comes to the album’s political leanings. Born with spina bifida and scoliosis, Urango spent his early life struggling in an industry and society where little help is given to those with a disability, often leaving many to cope alone, in poverty. It was something he experienced first-hand and a theme he addresses not only on the album but away from music too, where he is passionate social activist.

“It’s just so bad,” Urango says of the lack of support for disabled people in the US. “You can’t have over $2000 in savings otherwise they take away all your benefits. You can only work to earn a certain amount. Basically, the whole system is meant to keep you in poverty and not enjoy your life.”

When he left school, low paid jobs and long hours made it impossible to balance work alongside developing himself as a musician. In fact, it almost killed him. One employer chastised him for not being able to keep up; another made him work so hard he ended up in hospital with pneumonia where he almost died. Only after this near-death experience was he finally awarded some disability support from the government.

“I really want disabled people to turn their anger towards the system that truly tosses us away because we can’t work,” he sighs. “Our [society] doesn’t give a damn about poor, working class people, disabled people.” Touching album closer, ‘Kid Born In Space’, is a reproach to those who excluded him as a result of his disability: “I see them looking down on my dreams of being. I hear them making fun of my voice, but I keep on moving forward, I refuse to live in anyone’s shadow,” he sings on the track.

“If you’re disabled or if you’re poor, nothing is ever earned through asking nicely. They’re never going to give us anything when we ask nicely. Reforms and things are won, you have to fight for them and threaten them with, ‘We’re going to keep coming at you. If you take this away, we’re going to come at you harder.’”

“This is why so many artist are from middle class or wealthy backgrounds because the economic system makes it so that the poor and the working class don’t have the time in the day to live, to enjoy things and to do things outside of working.”

“I want my music to encourage people to fight for change, to rebel”

Urango’s message on the album is delivered via a fierce punk spirit, reflecting the music he fell in love with as a child. At school, he escaped bullies by making friends with a group of like-minded punks.

“I just sort of gravitated towards them in junior high,” Urango laughs. “We’d burn CD’s and bond over Oxnard’s punk scene, which we could all get excited about.” Through them, he says he discovered bands like The Ramones, Crass and Rudimentary Peni. “It really shaped me to find a group of people who were accepting of me and they also shaped me to be resilient and tough. It really taught me about going against the tide… punk is political of course, so it was the start of my anti-capitalist views.”

These anti-capitalist views are apparent on tender album opener, ‘Don’t Forget Your Neighbourhood’ where he asserts “Fight for your town with your fist closed, strike it and make it more than a memory,” demanding listeners hold politicians to account. The message may be at odds with the track’s poppy leanings, but Urango says this was deliberate. “I have my beliefs and my messages that I want to get across to as many people as possible so obviously I’m going to do that through pop because it’s so positive,” he smiles.

The album took Urango just over three years to make, each track feeling meticulously crafted. “I like challenging myself when I make a song,” Urango says, reflecting on the length of time he spent writing and recording the album. “I never want to do a song and say ‘Oh, I don’t do that genre, so I’m not going to do it. No genre is off limits. I think what makes certain artists special is when you can tell it’s them, no matter what the song sounds like – there’s something about it that makes it them. That is something that I always strive for, no matter how long it takes.”

“People have so many struggles in their lives, they’re already depressed, they’re already struggling. I want to be enthusiastic and optimistic whilst also being real. It reflects their hard struggle but does so in a way that encourages people to fight it, to be optimistic, to push through anything. The working class can do anything. The working class has nothing but deserves everything. I am trying try to send this messages out through my music and I think pop is the best way to do it.”

Is he planning to make more political records when he gets to Paris? He laughs, saying the studio in Paris where he is recording is located in an area that was a historical battleground for people’s rights during the French Revolution.

“As pressure gets put on those in power, things are going to change because they fear the pressure of the masses. I want my music to encourage people to fight for change, to rebel,” he smiles. “And I’ll be there to support them when they’re fighting.”

‘Prosthetic Boombox’ is out now