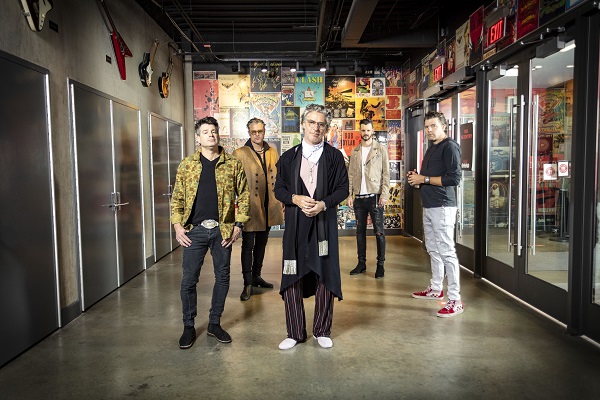 Will Turpin of Collective Soul joins Anne Erickson to discuss the band’s new music on the way, their summer itinerary and the legacy of “Shine”

Not many bands can claim to have songs that define a generation and continue to live on decade after decade, but Collective Soul is one of those bands. The Georgia-bred rock band came up in the 1990s, right when glam metal was falling off and alternative rock was getting its foothold in popular culture.

Collective Soul shot up the charts in the ’90s with songs such as “Shine” and “World I Know,” and the band has always kept creating. Their latest full-length, “Blood,” dropped in 2019, and they have two new albums ready to release down the road.

Collective Soul are back on the road this summer and fall, including a headlining performance at Meijer Gardens in Grand Rapids, Michigan, on Sunday (July 25) and U.S. tour with Better Than Ezra and Tonic ahead. Find the full upcoming itinerary on Collective Soul’s website.

Will Turpin, a founding member of Collective Soul, joined Anne Erickson of Audio Ink Radio to discuss the band’s new music on the way, their summer itinerary and the zeitgeist of their longstanding hits. Read the Collective Soul interview below and listen to it via the Audio Ink Radio show on Apple Podcasts here and Spotify here.

On the band’s recent tour with Styx

We missed playing on stage, but other than the significance of going through a pandemic, to me, the coolest thing was to get back on stage. I knew we’d play music again. It’s been part of my life since I can remember. But, to get in there and see crowds of people celebrating and hanging out together just felt really positive. The other positive spin to that was that we were with some friends who we kind of knew before. Tommy Shaw has recorded with us before. Being able to do a show with Styx night after night was almost as inspiring as coming out of the pandemic, because they just inspire me, and they’re some of the best caliber musicians that Earth has ever known.

On taking over his father’s studio, Real 2 Reel Studios

I took over ownership of my father’s studio in 2019 and renovated some stuff and updated some things, but nothing the way the studio is now. It’s Real 2 Reel Studios in Atlanta. My dad opened the studio in 1976, and the location we’re at now was built in 2002 and 2003. Because of not being on tour, I was able to get over there five days a week, and the place wouldn’t have been quite so on point if my schedule stayed the same. So, I was in the studio every day, and that was as a silver lining. It wouldn’t have happened without without the pandemic. So, the studio is on point, and I’m so proud of it. My dad would be very proud right now, too, if he could see it.

On the progress of Collective Soul’s new music

We have another record- it’s about nine or 10 songs. We actually have two records in the can right now. There was another record that was going to come out last year that’s basically “Blood” part two. It’s called “Vibrating.” We recorded all the songs for “Blood” and “Vibrating” in the same era. So, that comes out very early next year, probably February. And, it’s easy for me to promote my stuff, but I was really proud of “Blood,” and not to have rose-colored glasses on what’s best or better, and I’m not a best or better guy, because it’s all art. But, it’s hot. It’s super hot. I’m excited for people hear it.

On the musical direction of the new music

I mean, the only surprises would be some of the production and that Collective can still grow and evolve and still sound like classic Collective Soul but still be new and fresh and have a new sound. We do it naturally. We don’t we don’t overthink it. We just go by feel. But, the record sounds current.

On Collective Soul passing their 25th anniversary in 2019

We all came from the same town, and we definitely weren’t cocky, but we were really confident in how good we could be. The most important thing we wanted to do was to record more and more music, so people could see and feel what we felt. We knew we had something special together, but we always were looking for just the next record. We want to do more records and create more. I don’t ever remember even thinking, “25 years later.” I don’t think that’s something you really think about a whole lot coming from an artist’s perspective. But, once we entered that kind of legacy band status about seven, eight years ago, I kind of understood what that means- that they’re not going to stop playing some of our music. (These songs) are always going to be part of the fabric of everything.

On the early 1990s music scene, when attitudes were shifting from glam metal to alternative rock

The energy was hot. Things were changing. The sound was going from very pop-rock and the content of what people were singing about was all about getting laid, partying and how cool can I be. And then, early ’90s rolled around, and it’s like, we’re tired of this s***. We want to hear bands who write songs about real life, and they dress normal. They don’t wear makeup. They don’t spray their hair up. We were part of that, and it was part of us. It’s not like we said, “Let’s get on that bandwagon.” That was our wagon. That’s who we were. We were writing songs about real things. Everybody’s trying to look cool, but we weren’t freaking doing all the glam bulls***. So, it was awesome. It was fun being part of that. Then, the energy in the crowds kind of reflected all that same stuff. It was more like, “Yes. This is real music.”

On the longevity of ’90s alt-pop bands such as Collective Soul, Gin Blossoms and Tonic

Those were real songs, and those were songs that were meant to last and be heard over and over. You’re not going to be 50 years old and go back to “Cherry Pie.” Timeless is the word that you hear a lot. We went more to timeless art, timeless rock ‘n’ roll with that shift in the ’90s… It was overnight, because we kind of knew some of (the ’80s glam bands). Bret Michaels, who’s already had his comeback and he’s doing awesome, but Bret Michaels was hanging out with us in ’95, and they could hardly get a freaking show. He’s hanging out at the Van Halen shows just like, “What do I do next?” But, but he hung in there and he’s got a real career and he’s very successful, but it was overnight. They went from amphitheaters to promotors don’t even want us.

I don’t think you ever know something is going to be that big and so transitional and part of such a transitional movement. I don’t think you could predict that. Once that snowball started going downhill, even in ’94, I was like, “This is a big freaking snowball.” I mean, I realized it in the moment, but even in the moment when it’s the No. 1 rock song of the year, you still don’t know that it’s going to cross generations.

On how he describes Collective Soul’s live shows

We call our shows a celebration of life. It’s about getting in there and celebrating the music that the people have allowed to become the soundtrack of their lives. So, the memories, the things you do, the things that happened in your life- those things kind of become the backdrop.