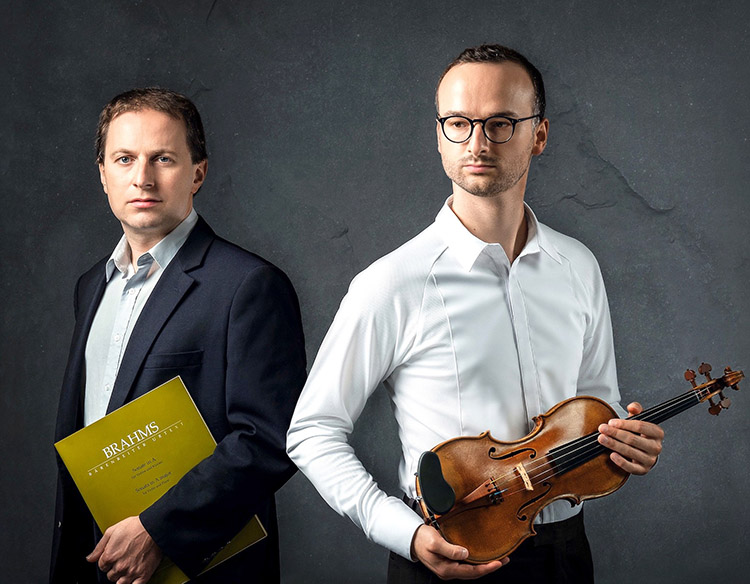 Daniel Kurganov, violin; and Constantine Finehouse, piano, offered a condensed version of “Autumn Affection” a couple of days ago for Music Mondays at the Scandinavian Center in Waltham. The duo plans its recital debut at Merkin Hall NYC on October 12 with the full version thereof.

Baal Shem, Three Pictures of Hasidic Life, by Ernest Bloch begins with Vidui, or Contrition, a song of confession, a “dolente and dolce, sorrowful and sweet” violin solo over a piano accompaniment consisting of solid or broken chords. Vidui alternates between these two moods. Internal agony is expressed in two to three note phrases that offer little lyricism, melodic contour, or resolution. When the opening phrase is repeated well into the piece, it is one octave higher than at the beginning, communicating further struggle. We hear few cadences and minimal tonal resolution, but the piece does end with an E major chord. Kurganov captured the mood, sliding between the first two notes rather than playing them cleanly. He followed the score’s dynamic markings meticulously and played with a rich and varied sound. Finehouse’s assured support cast the musical agony into sharp relief.

Nigun, a Jewish religious song, explores the mystical soul through triplets, repeated intervals, scales with a lowered second and minor chords outlined in rapid rising arpeggios in the violin. In the section marked Poco meno lento section calm prevails. Repeated major triads contribute fleetingly to an upbeat mood. Returning to the pain and depth of the human soul, a driving four note motif brings about a recap of the opening theme one octave higher than originally heard. Calm returns again just before the end, and ends in a reassuring, understated D major chord. The final movement is Simchas Torah, a rejoicing in the Torah. The main element, a one measure three note motif, is tossed about and answered, but ultimately disappears. There is much interplay between the instruments amid expressions of primal joy. The duo’s fine musicianship was on display throughout, channeling  pathos and joy using the full possibilities of their instruments.

The Kurganov-Finehouse duo commissioned Aurora for Violin and Piano from Stephanie Ann Boyd. Directives in her score evoking the cosmos, ie “Of never-ending space; of pure solitude” alternate with traditional interpretive instructions, ie, “tender, sweet, a lullaby.” Boyd’s rising scales in the piano often start on the second half of the quarter note beat, seeming to come out of nowhere. Boyd notates one 12-measure interlude, “A deep sigh; flying through stars.” A circular motion is evoked by the piano’s repetitive gesture which consists of a rising and falling whole tone scale in a 6 to a beat 16th-note rhythm. The piano provides the bright dancing lights of the aurora while the violin’s long lines recall space and time. The listener comes to the inescapable conclusion that the earthly union of time and space yields love, our most enduring emotion.

Turgenev’s romantic novella, “Song of Triumphant Love” inspired Chausson’s Poeme. As part of his introductory remarks, Daniel played the love theme, a leitmotif heard throughout. Poeme begins Lento e mystyerioso, with the solo piano hinting at the love theme. The violin enters playing the love theme, which is then taken up by the piano with full chordal accompaniment. Animato sections alternate with those marked lento. Moments of passion and fury give way to sweetness. A series of rising trills in the violin bring the D major Allegro section to an end and return us to the tranquility of the opening key, E flat major. Fragments of the love theme ultimately disintegrate in a series of descending trills.

Brahms Sonata for Violin and Piano No. 3 Op. 108 in D Minor closed the concert. Kurganov asserted that Brahms’s last statement in this form is his most perfect. The first movement embodies musical integrity, as Brahms assuredly moves from idea to idea. The songful melody of the second movement, played in the violin’s lower register, bears the four-note, long-short-short-short motif. The piano plays on each beat of the triple meter. Gorgeous and uplifting the second movement ends all too soon. The third movement, while terse and Un poco presto, is nonetheless marked con sentiment. It makes for a sly playful interlude. The fourth movement opens full of sound and fury. The theme consists of an initial downward leap in longer notes followed by an arching line. However, by m. 39 we are in tranquil territory, with the piano in chorale mode introducing a lyrical four note theme. The contrasting elements, the terse exchanges between piano and violin, and the ever-briefer thematic motifs drive the piece to its dramatic conclusion.

With confidence and conviction the duo fulfilled the myriad musical demands to a high degree of perfection. We are eager to hear, or read about the duo’s NYC debut and are even more eager to hear them again at the Scandinavian Cultural Center.