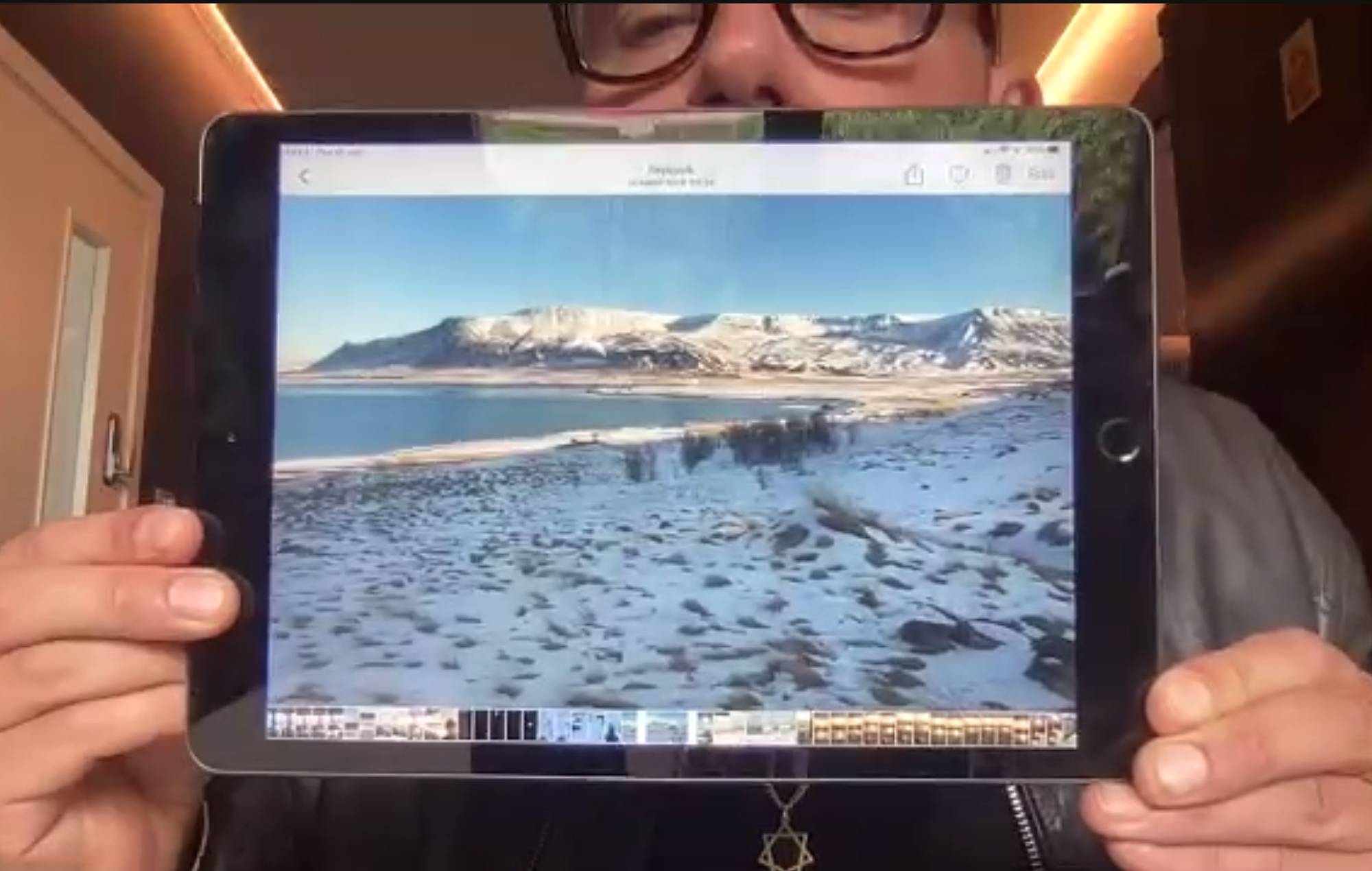 Much like the rest of us, Damon Albarn has been navigating that headfuck of being stuck at home while trying to make sense of his place in the world, hoping that some good will emerge when the pandemic ends and the fog starts to clear.

On the recently released title track from his upcoming second solo album ‘The Nearer The Fountain, The More Pure The Stream Flows’, the Blur and Gorillaz frontman pensively pines over “the beautiful past, left so desolate now – when youth seemed immortal, so sweet it did weave heaven’s halo around you”. ‘Parklife’ it ain’t. But then his Wednesdays rarely see him “rudely awakened by the dustman” as of recent years; you’ll more likely find him caught aghast by the ethereal landscapes of Iceland – he has a house on the outskirts of Reykjavik – and the stormy coastal skies of his home in rural Devon.

The result of Albarn’s Attenborough era is a meditative collection that sees him size up nature itself. “I have been on my own dark journey while making this record and it led me to believe that a pure source might still exist,” he says.

We caught up with Albarn via Zoom to talk about his adventurous new album, returning to Glastonbury, Boris Johnson and co.’s dangerous behaviour, and what’s next for Blur and Gorillaz. Oh, and he also shares a lovely snap from his time in Iceland.

Hello Damon. How have you been?

Damon Albarn: “I’m good, thank you. I’m very busy but I’m hanging in there. Throughout all of this, I’ve just carried on making music. Obviously I’m desperate to go out there and play some gigs, but I was thinking maybe we should play at half-time at football matches? Or in between races at Epsom? We could all get a go, then. There’s a lot of sport going on. Then again I mustn’t grumble, being a Chelsea fan!”

Quite right. So, this is one of the first interviews you’ve done about your new solo album ‘The Nearer The Fountain, The More Pure The Stream Flows’?

A little, but people are just going to shorten it ‘The Nearer The Fountain…’, aren’t they?

“Yes, but don’t you want to know what happens nearer the fountain?”

I do! I understand this album started out as a set of orchestral pieces inspired by the landscapes of Iceland. What is it about these places that first drove you to pen music about them?

“Well, the best thing to do there is to show you the view from the window. It’s slightly unorthodox for a Zoom interview, but sometimes words aren’t enough…” [Damon shows NME the extremely beautiful view he snapped in Iceland].

That’s really wonderful. So what did looking at that every day stir up inside you?

“It’s a nice place to meditate on the elements and particles. I’d been dreaming of making music while looking out of that window, when my friend from the Lyon Festival offered me the very tempting proposition: ‘You can do whatever you want’. I immediately had something that I never thought would be feasible, so I organised some musicians, string players, three bass trombones, some percussion and keyboards into an interesting arrangement.”

Was there anything special in the arrangements to capture Iceland’s uniquely supernatural feel?

“I found a stone marimba made by this guy who lives in the mountains outside of Reykjavik. He literally finds each note as a stone in mountain streams. Just to make a pentatonic scale can take years. It’s a beautiful thing. There’s no manufacturing; it’s just him knocking on all these stones found in streams to find the right note. Anyway, I digress too much for our snappy little interview. Where were we?”

You were telling us how the arrangements came together. How did heading back to your home in Devon and living in lockdown shape the record?

“Obviously March came last year and that was the end of everything. What I was left with was all of this great rehearsal recording from just a mic in the room. I just felt like the beginning of this year was so grim and I had to do something to lift me out of those, I wouldn’t call doldrums, but storms – those terrible north wind storms that you get down by the sea in Devon sometimes. They come down off the Atlantic from Greenland, they spin round, and they’re brutal. I got together with a couple of my old friends who I’ve been making music with for a long time – [former Verve guitarist] Simon Tong and Mike Smith – and just tried to nail everything into some kind of cohesive meditation about particles, now and the future.”

So when the time came to turn all this material into these 10 pop songs, what were you drawing from lyrically?

“While [I was] staring out of the window in Iceland, the wind was so strong that the windows would start to move. It was so freezing that sometimes you’d be staring at the rain and while you’re watching it, it suddenly turns to snow. I took some of these real-time, extreme elemental experiences and then tried to develop them into, as you say, more formal pop songs with that as my source. I wanted to see where that would take me. Sometimes it took me down to Uruguay and Montevideo. Other times I went to Iran, Iceland or Devon. With travel being curtailed, it was kind of nice to be able to make a record that strangely put me in those places for a moment or two.”

You chose to debut a lot of these songs at the Live At Worthy Farm livestream, when many might have been expecting more of a ‘greatest hits’ set. Was that because Glastonbury and the Stone Circle put you back among the elements?

“Of course, yes. You can’t compare them, but that was definitely up there with my all-time [favourite] Glastonbury experiences. They’re all interesting and sometimes magical. Worthy Farm is a national treasure in that sense. What I love now is that idea that the countryside is there for everyone. That’s only being meditated upon for the first time now by the people who live here. A lot of people are leaving the urban sprawl and going, ‘Wow, this is here’. I don’t know if that was the intention of Brexit when they voted for it, but that will be a deliciously ironic outcome – if you understand what I’m saying…”

Speaking of ‘sunlit uplands’, the last time you spoke to NME you discussed how The Good, The Bad & The Queen’s last album ‘Merrie Land‘ dealt with – to quote the title track – the “graceless” and “disconnected” leaders who were “raised up in mansions” and “don’t care about us”…

Could you have ever foreseen Boris Johnson’s ability to get away with just about anything, as long as he and his pals are waving flags?

“It’s a very studied kind of form of behaviour. It’s extremely disarming for anyone who doesn’t read between the lines, the pauses or the guffaws. It seems to me that they’re just very insular. There are a few of them who were all there and in the same room when Brexit was conceived. Some of them aren’t there any more and seem to be bad losers. But within their truth there is a truth, and within that truth lies a truth. What do I think about them? Well… [incredibly long pause]… it’s genuinely hard to express what I feel.”

Are you concerned about the recent weaponisation of nationalism? “That was the thing that terrified me the most about it – the Pandora’s Box that the likes of Brexit and Trump have opened, but that’s just a symptom of the social media age. We have opened that box and now lay within it, betwixt TikTok and Facebook.”

Has all of this news from the muck and the mire been inspiring you musically at all over the last year?

“I just try to breathe, keep my shoulders loose, stay creative and not fuck shit up.”

That’s great mantra. Has ‘The Nearer The Fountain…’ been your primary focus recently of have you been busy with other things?

“I finished it in February. Since then I’ve been working on carnival-themed music with Gorillaz with a lot of people from west London. We’re really going back to the spirit of the first record. It’s really exciting and we’ve been really enjoying it. It’s a nice kind of counter-balance to ‘The Nearer The Fountain…’, really. I’ve definitely needed a dose of something else after I finished that record. Steel pan drums and Casio MT-40s were always going to be a good cure.”

Dave Rowntree also recently said that he’d be up for a post-pandemic reunion with Blur. Is that something that’s on your agenda too?

“Well, we did have a chat recently, but we haven’t really progressed further than that. We did have an idea though; I’ve just been a bit busy at the moment obviously. When it happens, I’ll be made up. When it’s wanted, I’ll do it. I don’t want to foist that stuff on anybody unnecessarily.”

You must be itching to get back out there and play though?

“Yes, Boardmasters with Gorillaz is going ahead. Music is ill and it feels like it’s been left to the back of the line. We’ve been patiently waiting and will wait longer. We’ve missed everybody. It’s just difficult for everyone because there are such huge outlays with festivals so they’re not going to do anything this year, which for a lot of people will be quite life-changing.”

Are we going to be seeing you on the road a lot when all this horror is over, then?

“I think I’ll be working 360-plus days next year, like everybody. It’s not really an option! You’ve got to get on with it or it’s gone. It’s a tradition. If we don’t connect with it again, then we will lose it. This is the thing we need to understand about culture – it can evolve but it needs that connection. Zoroastrians [one of the world’s longest-practiced ancient religions] have a fire that hasn’t gone out in 3,000 years. That’s what we need to do; keep our fire alight.”

– Damon Albarn releases ‘The Nearer The Fountain, The More Pure The Stream Flows’ on November 12 via Transgressive Records, before a run of solo tour dates in early 2022. Gorillaz will headline The O2 in London on Wednesday August 11, with appearances set for Boardmasters 2021 and Primavera Sound 2022