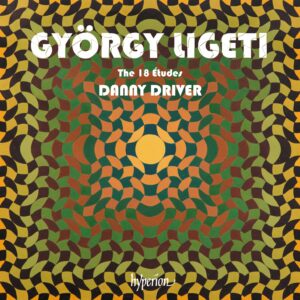 Composed between 1985 and 2001, the 18 Etudes by György Ligeti are an eloquent summary of the techniques he had developed throughout his career. They rival the best collections of etudes for piano while adding substantially to the variety of technical means to be explored, particularly in the realms of polyrhythm and sonority.

There are a number of recordings of the Etudes and it is difficult to choose a favorite: different ones excel at various aspects of these multifaceted works. Danny Driver’s is a strong contender. Amply powerful where required, Driver’s playing also brings out a variety of dynamic shadings, with passages of exceptional delicacy (notably absent in some other interpretations). For instance, Driver’s rendition of “White on White,” in which both hands play white note collections, is diaphanous in the beginning and coda and incisive in the moto perpetuo middle. He demonstrates mastery over the technical challenges and has a keen sense for the reference points found in each Etude.

Several interests that Ligeti developed late in his career impacted the language of the Etudes: the minimalism of Steve Reich, African music, and an abiding love of rhythmic canons that expanded to encompass the work of Conlon Nancarrow. One can also see in the list of dedicatees – Pierre Boulez (to whom the first three Etudes are dedicated), Mauricio Kagel, György Kurtág, and Pierre-Laurent Aimard among them – the music and performance qualities of others respected by Ligeti that in turn filter through the Etudes.

There are three books of Etudes, the first containing six, the second eight, and the last book four. Many have self-imposed restrictions that create intriguing, at times playful results. For instance, the first Etude Désordre consists of ascending and descending polyrhythms, with the left hand playing only black keys and the right white keys, thus juxtaposing pentatonic and pandiatonic collections. Galamb Borong also has a different scale for each hand, the two whole tone collections meant to stand in for the scales of Balinese gamelan. Automne à Varsovie is a canon in polytempo, with overlapping relationships of 3,4,5,6,7, and 8, and a perpetually descending motive.

Coloana Infinita, the 14th Etude, is the tour-de-force among formidable pieces. The original version was viewed as unplayable by humans, and made into a player piano piece a lá Nancarrow. The revised version is scarcely less daunting, Thick pile ups of chords build a multi-textured ascent. It sounds like at least three hands are required, but Driver manages just fine with two, wielding intensity and virtuosity in impressive fashion. He provides a similarly energetic performance of Vertige, its fortissimo, chromatic music, this time descending, devolves into a soft rumble only at its conclusion.

The final work of Book Three, a brief Canon, is rendered with effusion and a coy, pianissimo coda that is an enigmatic valediction. Canon demonstrates Ligeti’s continued inspiration and considerable imagination late in life. Driver’s recording is a fitting celebration of the composer’s legacy. Recommended.