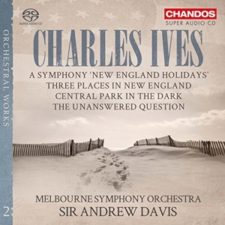 This well-filled disc contains excellent performances of some of Ives most popular and significant works. It’s easy to understand why the “Holidays” Symphony has enjoyed greater success as four individual tone poems. With the exception of Thanksgiving, the three other movements (as well as Central Park in the Dark and other Ives pieces) all share the same basic form. They start with a dissonant, slow passage scored mostly for strings, then there’s a lively middle section based on popular dance, march, and hymn tunes. This quickly rises to a chaotic climax and then the opening music returns in a brief coda.

Andrew Davis deserves credit for differentiating the first three movements in a way that prevents monotony–a function of flowing tempos and carefully delineated string textures–while still letting Ives’ cacophony sound aptly cacophonous. Only the unnamed chorus at the end of Thanksgiving could have enjoyed greater prominence, but it’s no big deal. For all we know the singers might be members of the orchestra, which is just fine. The tune, “Duke Street” is still used in the New Haven Protestant churches. I know because when I was in high school in New Haven we sang it there, although not at Thanksgiving.

This performance of Three Places in New England is also first rate, with a rambunctious middle movement and a particularly poetic account of The Housatonic at Stockbridge. The Unanswered Question is basically unkillable (although it has been done), although I’m not sure why it’s separated from its companion piece, Central Park in the Dark, by the Three Places. That was gratuitous, but it hardly matters and you can always play the music in any order you choose. This being Ives, it hardly matters. Fine sonics round out a very desirable release.