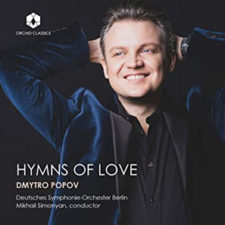 No matter what kind of opera listener you are–the “serious devotee” whose interest embraces all aspects of opera, from the musical to the theatrical and beyond–or, one whose primary interest is the singing, who’s happy just to listen to a recital of arias by a favorite singer, focusing on vocal quality and mastery of technique, and the power and effectiveness of interpretation–you will find much to enjoy and appreciate in this first solo recording by Ukrainian tenor Dmytro Popov.

Many of those devotees will know him from his couple of decades of appearances in prestigious opera houses around the world, and now the aria aficionados have an ideal opportunity to discover a singer likely to become a new favorite. From the opening aria, Puccini’s “Recondita armonia”, you experience Popov’s remarkable vocal facility and a tone immediately and consistently pleasing across registers, with an overall quality that just might suggest, here and there, a young Björling.

Throughout Gounod’s “Ah, lève-toi soleil!” Popov demonstrates his signature warm, centered tone, silvery brilliance in the upper register, supple, easily flowing phrasing, and a gorgeous “rounding off” on the final note. In Bizet’s “La fleur que tu m’avais jetée” he movingly conveys the requisite tender lyricism even if the passion is much more restrained than, say, from Björling or Jonas Kaufmann. In fact “restrained passion” characterizes much of Popov’s singing, which works quite well as he is a very intelligent singer who knows how to create an emotional framework and context and then work within it. In other words, there is nothing in his interpretations that’s dramatically or vocally gratuitous.

Yes, he has power when required–his projection in Puccini’s “Donna non vidi mai” or Dvorák’s “Vidino divná”will convince you–but he also floats some of the most gorgeous, softly sounded tones you’ll ever hear (try the one at the end of Borodin’s “Medlenno den’ ugasal” from Prince Igor). I don’t think his Russian offerings (two Tchaikovsky, one Borodin) are as compelling as the other selections, but in his rendition of Léhar’s “Dein ist mein ganzes Herz!” he proves he can do schmaltz, with both style and a convincing expressive refinement.

And there’s certainly no wanting of passion in his final “Raven black brows, eyes like hazel”, a Ukrainian folk song that he obviously feels to the core, musically, emotionally, spiritually. And it’s a fine song as well, more than worthy to stand in company with these opera arias. Importantly, Popov receives superb support throughout from Mikhail Simonyan and the Deutsches Symphonie-Orchester Berlin, and from engineering that places Popov and the orchestra in an ideal clear, well-balanced concert acoustic.

Popov decided to release this recording even though it was in the middle of a pandemic. He offered his reflection on that decision: “Love is the only way to survive right now! Actually I didn’t plan to release the album during a pandemic…but I know we need to hear these positive pieces more than ever at this time. All of these arias are very optimistic and full of love; there’s no drama, nobody dies! If my recording will touch only a thousand people, that will make it worthwhile for me. It’s very important for singers to feel this connection, especially when we cannot perform to the public. And anything we can do to lift people’s spirits has to be good.”