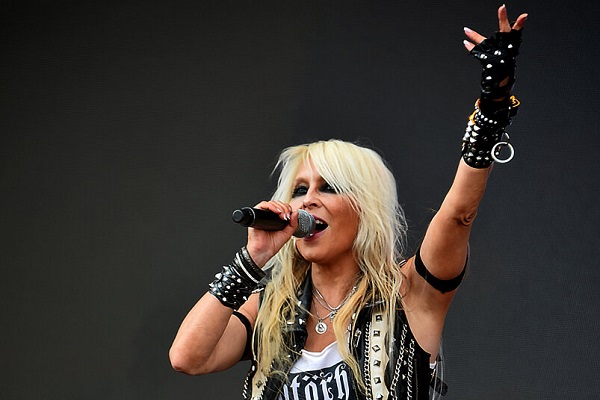 Doro Pesch of Warlock is coming up on the 35th anniversary of her classic album, “Triumph and Agony.” In honor, Pesch will release “Triumph and Agony Live” on Friday (Sept. 24), featuring footage from the band’s first tours performing the album live, from front to back.

For Pesch, recording and touring on “Triumph and Agony” doesn’t seem like it happened 35 years ago. The memories are still fresh and vivid in her mind.

“It feels like maybe give years,” Pesch tells Anne Erickson of Audio Ink Radio. “I remember the recoding like it was yesterday! We had great touring moments. In Europe, we toured with the legendary Ronnie James Dio and became great friends. Then, then in America we did the great tour with Megadeth and Sanctuary, and I became friends with the guys of Megadeth and Sanctuary. It was the best memories.”

“Of course, the time was so awesome,” she adds. “In ’87 and ’88 was the peak of metal, and that was my favorite record. We went out and recorded it live, and it was so cool to play all the songs! it was a real treat.”

Pesch was one of the early pioneering women in metal music. While she was often the only female on tours and backstage at shows, she says she hardly even noticed. She fit right in with the guys and felt a deep level of respect from them.

“It felt totally natural,” she says of being a woman in metal in the ’80s. “It wasn’t a big deal to me! I love metal, and I love the fans, so I always felt really accepted. I was treated great with all the touring. For example, my first tour Judas Priest, they were great friends and supported me. Then, (Ronnie James) Dio was so nice to me. Motorhead- Lemmy (Kilmister) was my best friend. So, they were all very supportive, and I was just one band member. It didn’t really matter that I was a woman or where I was from. It always felt really good. It’s great to be a woman!”

She adds, “The only thing I noticed is when we played the legendary Monsters of Rock festival in ’86, which was Castle Donington in England, which was a very important festival. It was the biggest at the time. I had some stage clothes, like I always wear. Usually it was leather in the ’80s. Now, it’s not real leather because I became vegan and I don’t wear real leather anymore for the animals. But, back then, I had all kinds of stuff, and you had to tie it together. Then, I couldn’t find a girl or lady in the whole backstage area, which was hundreds of people. It was all guys! That’s the only time I thought, I think I’m the only woman here! So, I asked my drummer to fix me up. But, I didn’t even realize it was such a different thing. I was always a metalhead.”

When it comes to the state of heavy metal music today, Pesch thinks it’s in a great place. In fact, she believes metal music has more respect now than it did in the 1980s.

“When I started out in the ’80s, sometimes people looked down at metalheads,” Pesch says. “I remember a couple of times, we went to some restaurants and wanted to get some food, and they didn’t serve us, because they were probably scared! Now, I feel metal is so accepted. Everybody knows these bands. Everybody loves Lemmy and Dio, and it’s cool, but in the beginning, it was sometimes hard. But, to be an outlaw, I don’t mind! I thought it was cool. Now, I think it’s in a great place with all these great festivals and strong, big tours.”

She adds, “I think it’s really good, and it always goes up and down. Sometimes, like in the ’90s, it was a little bit tough, because when grunge took over, then the normal heavy metal and rock wasn’t supported so much anymore, because the whole industry only wanted the grunge stuff. I recorded at least five or six records and put all my heart and soul into them, and then I showed the record company, and I said, ‘I think this could be a great single a great video and check it out and listen to it. I think it’s great record.’ And, they said, ‘Well, is it grunge?’ And I said, “no.” They said it had to be grunge. I said, “No, it isn’t grunge at all.” Then, they didn’t even want to listen to it. They said, ‘We can’t do the marketing. You have to be grunge,’ and I said, ‘I don’t feel it. I’m metalhead.’ Then, I did a couple more records that were industrial, which I love, they said, ‘No. It has to be grunge.’ But, in 2000, then I felt, yes, metal is coming back.”