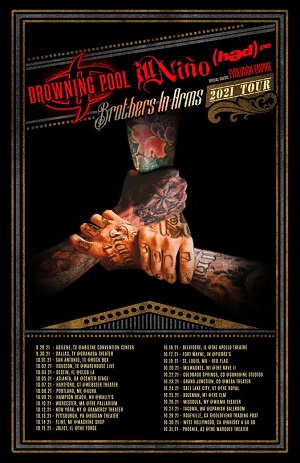 Three major nu-metal bands are joining forces for a lengthy fall tour. The trek, dubbed the debut “Brothers in Arms” tour, will feature Drowning Pool, Ill Nino and (Hed) P.E., with a run kicking off in late September and running through the end of October.

Drowning Pool will headline the trek. The band hits a milestone in 2021, as the year marks the 20th anniversary of their debut album, “Sinner,” plus they have new music on the way.

“I’m grateful and excited, and looking forward to sharing stages with musicians that I admire, playing music that I’ve appreciated for years,” Drowning Pool vocalist Jasen Moreno said in a statement. “I can’t wait to be on the road with my guys again, and I’m eager to see all the fans again – let’s stay safe and sound!”

Drowning Pool guitarist C.J. Pierce added, “Drowning Pool have been friends and family with these guys for more than 20 years – we opened for (Hed) P.E. before we were even signed, and we met Ill Nino on Ozzfest in 2002. When Dave Williams died, they hung our banner on their stage for the rest of the Ozzfest… Twenty years later we’re all still kicking and bringing new music to the table – and we’re still brothers in arms.”

Drowning Pool, Ill Nino and (Hed) P.E. all formed in 2001, so they have a rich history together. They’ve toured together and appeared at festivals together over the years, so this tour is something of a homecoming.

“I am extremely pleased to be hitting the road with my longtime brothers in Drowning Pool and (Hed) P.E.,” founding Ill Nino drummer Dave Chavarri said. “Ill Nino has deep history with both bands, back to 2001. This is a tour not to be missed!”

(Hed) P.E. will release a new EP, “Sandmine,” on July 23. Evolution Empire will also appear on the tour as the opening act.

“I’m excited to be getting out on the road with Drowning Pool and Ill Nino,” (Hed) P.E. frontman Jared Gomes said in a statement. “I’ve known these guys personally since the beginning. We all came up together, so it’s nice to get back on the road with my brothers in arms. This tour is gonna f***ing destroy. I wouldn’t miss this run if I were you!”