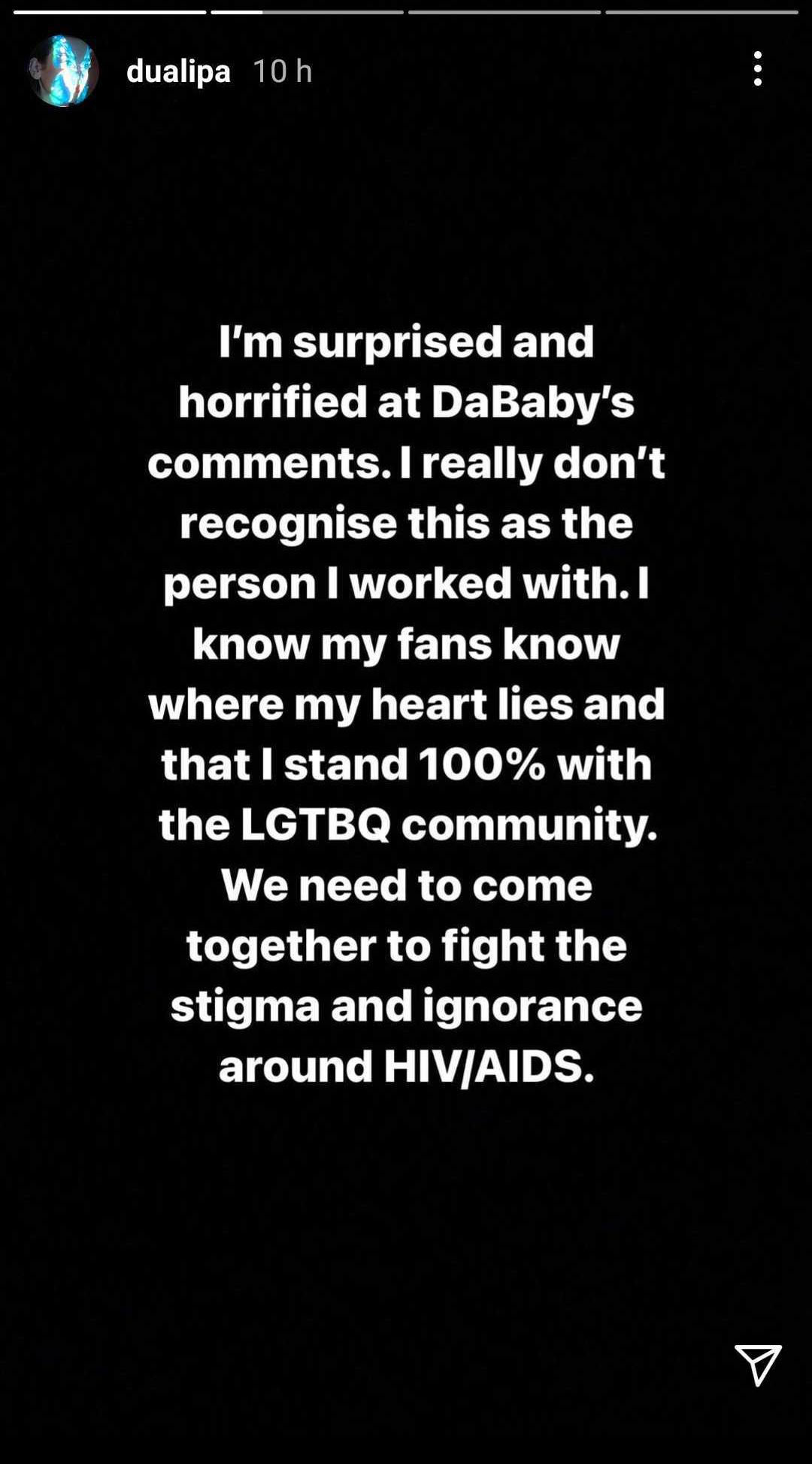 Dua Lipa has said she is “surprised and horrified” by DaBaby‘s comments, widely criticised as homophobic, made during his set at Rolling Loud Miami over the weekend.

DaBaby (aka Jonathan Kirk) drew criticism for controversial comments he made surrounding homosexuality and HIV/AIDS onstage at the festival on Sunday.

Lipa – whose 2020 ‘Levitating’ remix features a verse from DaBaby – said in a post to her Instagram Story: “I really don’t recognise this as the person I worked with.

“I know my fans know where my heart lies and that I stand 100 per cent with the LGTBQ community. We need to come together to fight the stigma and ignorance around HIV/AIDS.”

The rapper defended his actions in a series of 19 videos in his Instagram Stories yesterday, saying: “What I do at a live show is for the audience at the live show. It’ll never translate correctly to somebody looking at a little five, six-second clip from their goddamn crib on their phone.”

He continued, telling those who weren’t present at the show to “shut the fuck up”.

“Come fuck with the live show,” he said, “killer, gay or straight.”

T.I. also defended DaBaby in his own Instagram video, likening Kirk’s comments to that of Lil Nas X‘s openness about his sexuality in his music.

Kirk has since taken to Twitter to offer an apology for his remarks. “What I said was insensitive,” he said, “Even though I have no intentions on offending anybody. So my apologies.”

In an additional post, Kirk slammed groups of other artists, brands and networks that “like to profit off of black rappers influence on the culture, without understanding it”.

& for any brands, networks, or artists that like to profit off of black rappers influence on the culture, without understanding it or having the patience to deal with what comes with the position we play in our culture.

Keep yo money next time
us “NIGGAS” human too.#GodBless

In a final tweet, he included a plug for his upcoming shows (booked for this weekend). Kirk said: “Y’all cheer the fuck up & be proud of who you are cuz you can’t make me feel less of myself.”

Other than that y’all cheer the fuck up & be proud of who you are cuz you can’t make me feel less of myself. 💪🏾

Get them tickets for Friday & Saturday so I can show y’all how da fuck I get down. 🔥#LIVESHOWKILLA