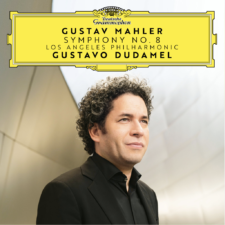 Deutsche Grammophon touts this new Mahler Symphony No. 8 recording as a “revolutionary form of audio experience” in Spatial Audio via Dolby Atmos, a surround-sound technology previously deployed in cinema and home theater setups, now brought to audio and best experienced with a multi-channel (up to 10 speakers) Hi-Fi system. However, in its Music app Apple claims the listener can obtain a similar effect using just its AirPods, MacBook laptops, and HomePod smart speakers (in stereo pairing).

Apple is getting the attention here because, at the moment, the Dolby Atmos version appears to be an exclusive, as Amazon, HD Tracks, and Tidal offer this recording only in standard stereo. This would explain why it showed up first in the new Spatial Audio releases list in Apple Music, and only later appeared in the classical section.

It was surprising to see Mahler listed alongside albums by Billie Eilish and Taylor Swift. Then again, maybe not. DG has been deliberately marketing its classical artists to the pop audience, and the album cover portraying Dudamel with his freestyle hair and Johnny Cash man-in-black attire is in line with this approach. This, along with DG making no mention of the various vocal solo and choral participants in its famous yellow cartouche gives the uninitiated the impression that it’s strictly about HIM with his Los Angeles backing band.

So, what about the performance? Well, it’s a major improvement on DG’s previous Mahler Eighth recording from earlier this year, which was seemingly made by redeployed Melodiya engineers who rendered the Philadelphia Orchestra sonically and dynamically inert, while Nézet-Séguin seemed to be conducting-while-Instagramming. In contrast, Dudamel is clearly paying attention, and brings sufficient energy to generate forward momentum. But that’s pretty much it.

The conductor’s quick pace stimulates, but doesn’t enthrall. There’s little of the excitement or sense-of-occasion generated by the great recordings of the past. With Bernstein you can feel his passion as he sought to fulfill his mission as a Mahler evangel, just as you can sense Solti’s mission to outdo Bernstein (he didn’t). Tennstedt’s transcendent reading enlivens the text as well as the notes, while Wit achieves impeccable musicality allied with beauty. Don’t look for these above-and-beyond qualities in Dudamel’s reading: he does the job he was hired to do and presents a suitable rendition of this mammoth work; but nowhere do you get the sense of the awe, excitement, and wonderment at Mahler’s accomplishment.

It would seem that today’s generation of conductors sees the Mahler Eighth as more of a personal-best challenge, and less so as a duty to faithfully realize the profound vision of the work and communicate it to the audience. Should we assume that perhaps Dudamel didn’t have time to undertake the kind of deep-study that Bernstein would, of not only the work, but also the literary sources that inspired it?

Or, more disturbingly, have we reached the point where there is no longer any connection to the ethos in which Mahler conceived and produced this symphony, and the performance tradition begun at the premiere and carried forward by his successors? And does no one anymore know how to conduct this symphony’s monumental ending? Instead of feeling the heavens open, here we get all the excitement of the end of a ferry ride.

Regarding the vocal contingent, the soloists all sound fully professional, but, with the exception of bass Morris Robinson, their singing lacks the authority, passion, and belief in the text that their equivalents provide for Tennstedt and Solti. And beyond this, there are individual disappointments. Baritone Ryan McKinny sounds labored in Ewiger Wonnebrand, which is unfortunate as his is the first solo of Part 2. More discomfiting is tenor Simon O’Neill, whose harsh, and at times squalid tone makes him sound like Alberich pleading with the Rhine maidens before stealing their gold. Happily the assembled choral forces turn in consistently fine work throughout.

And how does all this come across to the home (or increasingly these days, mobile) listener? Well, judging by this release, Dolby Atmos is not suited to classical music, at least not large-scale orchestra and voice recordings. Apple’s promotional audio boasts that Miles Davis now appears in your listening area (inside your head, via AirPods) as a distinctly positioned audio presence. And the effect is striking. However, this wreaks havoc on the Mahler Eighth.

The best conventional stereo recordings at least established a sense of place for the performers, but in Spatial Audio you can’t tell where anyone is, and there is no sense of the normal acoustic space you would experience in a live concert. The performance was recorded live in Los Angeles’ Disney Hall with its, judging from prior recordings there, uncooperative acoustic. The orchestra seems to be far in the distance (except for the trumpets), while the vocal soloists sometimes sound like they’re in their own echo chamber, reminiscent of Birgit Nilsson’s haunted-house moaning from the Solti Elektra recording.

To sum up, this Mahler Eighth is not “bad” (now that the aforementioned Nézet-Séguin recording constitutes the new “floor”), but it doesn’t compel your attention or purchase. Unless, of course, you’re either a Dudamel devotee, a collector who’s gotta have every Mahler Eighth that gets released, or are just nostalgic for that London/Decca Phase 4 sound. Everyone else–get any of the recommended alternatives.