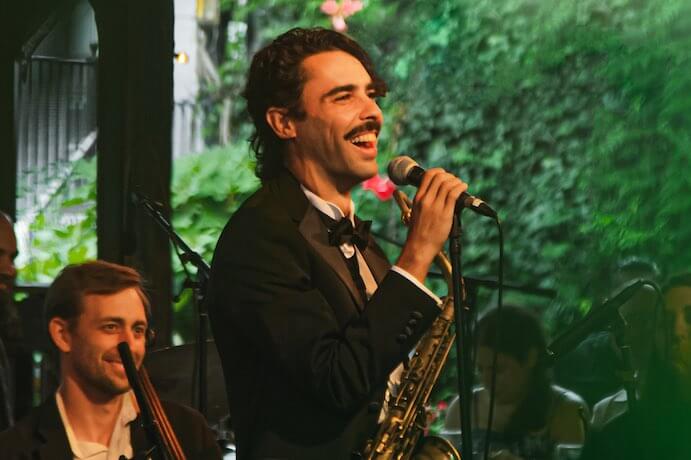 Eddie Barbash plays a wide repertoire that is not often heard on the alto saxophone. His latest self-released album, For Murray and Lillian, draws from jazz, folk, mariachi, opera, swing, bossa nova, ballads, and waltzes. Vincenzo Bellini, Cole Porter, Pedro Infante, and Vincent Rose are among the drastically diverse composers represented in his repertoire. Barbash is building a catalog of first-of-its-kind performances, which makes seeing him perform in-person worth more than listening to the album alone. At the album release show in Manhattan’s Chelsea neighborhood on Sunday, August 8, 2021, Barbash treated an audience to a live performance of the album, dedicated to the memory of his grandfather and grandmother, at Gallow Green in the McKittrick Hotel.

For Murray and Lillian is a collection of love songs that also describes the scene at the performance venue. With heavy attendance by his family, Barbash’s parents, aunts, uncles, and his grandparents’ caretaker for the last six years of their lives made the concert almost feel like the family dedication to the late patriarch and matriarch to which the audience got invited to help pay tribute. (At one point, Eddie auctioned off a baby picture to support his grandmother’s organization, the Islip Arts Council.) The warmth of the Gallow Green’s garden house interior rebuked the typical cold concert venue of the stage being set away and above the audience. Gallow Green is wrapped in plants that don’t just line the walls, but are the walls and the ceiling, building the sensation of being indoors even on an outdoor rooftop. The vegetation is so thick that it provides escape; there isn’t a view of buildings and cars and buses. Eddie Barbash–Photo by Lena Nicholson for The McKittrick Hotel

The strength of For Murray and Lillian is in the instrumentation: a string quartet on top of a jazz quartet. The KASA Quartet sits in with Barbash on alto sax, Dave Speranza on bass, Jose Guzman on guitar, and Joe Saylor on drums. Winners of the Coltman Chamber Music Competition and also soon to release their first album, KASA Quartet is already known for its range of musical styles from classical to bohemian jazz, and this was apparent in cellist Kyle Price’s string quartet arrangements for all of the music in the show. The instrumentation amounts to a unified orchestra instead of a lopsided juxtaposition of different genres.

The shift between arrangements of opera (Bellini) to renditions of bohemian music that traditionally pair accordion and fiddle (Viseur) pushed the textures of sound. A plucking guitar and chordal strings cemented the triple meter of Viseur’s 1930s French Musette tune, “Flambée Montalbanaise,” while the saxophone played an accordion line in the classical style, all high in range, all flying like a bird with rapid-moving lines.

Whether playing bel canto opera or bluegrass, Barbash floats his sound with a bright and tender tone. He doesn’t punch his notes, which is why he is able to embody the human voice in opera arias without straining on even the highest notes. And when he lands in his lower range, like in Pedro Infante’s “Amorcito Corazón,” he taps the bottom ever so slightly, before springing back up again.

In dedicating For Murray and Lillian to his late grandparents, Barbash also captures what the world has endured through 2020 and is still facing. Barbash has a sound that soothes those ills. He dedicated his performance of an excerpt from Bellini’s Norma to a late friend, Giovanni, who used to take him to the opera. This rendition of the “Casta Diva” aria enveloped with silk the grief felt over the past year of losing loved ones. Barbash told us that Giovanni always wore a tuxedo to the opera, and was the reason Barbash rented and eventually bought his first tuxedo — the one he was wearing that evening. This piece was one of surreality where the audience was confronted with an impossibility: a saxophone playing an aria with the kind of beauty reserved for sopranos like Maria Callas, the singer who recorded Barbash’s favorite version. The truth is, Barbash didn’t have to change his sound to better suit a soprano aria; it is his sound overall.

If there was anything at all to add to the show, it would be more women — not only as performers, but also composers and arrangers. Barbash is certainly reviving the lost era of the musical variety show, where everyone in the audience is likely to hear two or more composers and performers for the first time. But his inclusion of women would re-create it anew. For Murray and Lillian is streaming everywhere as of August 10, Lillian’s birthday.