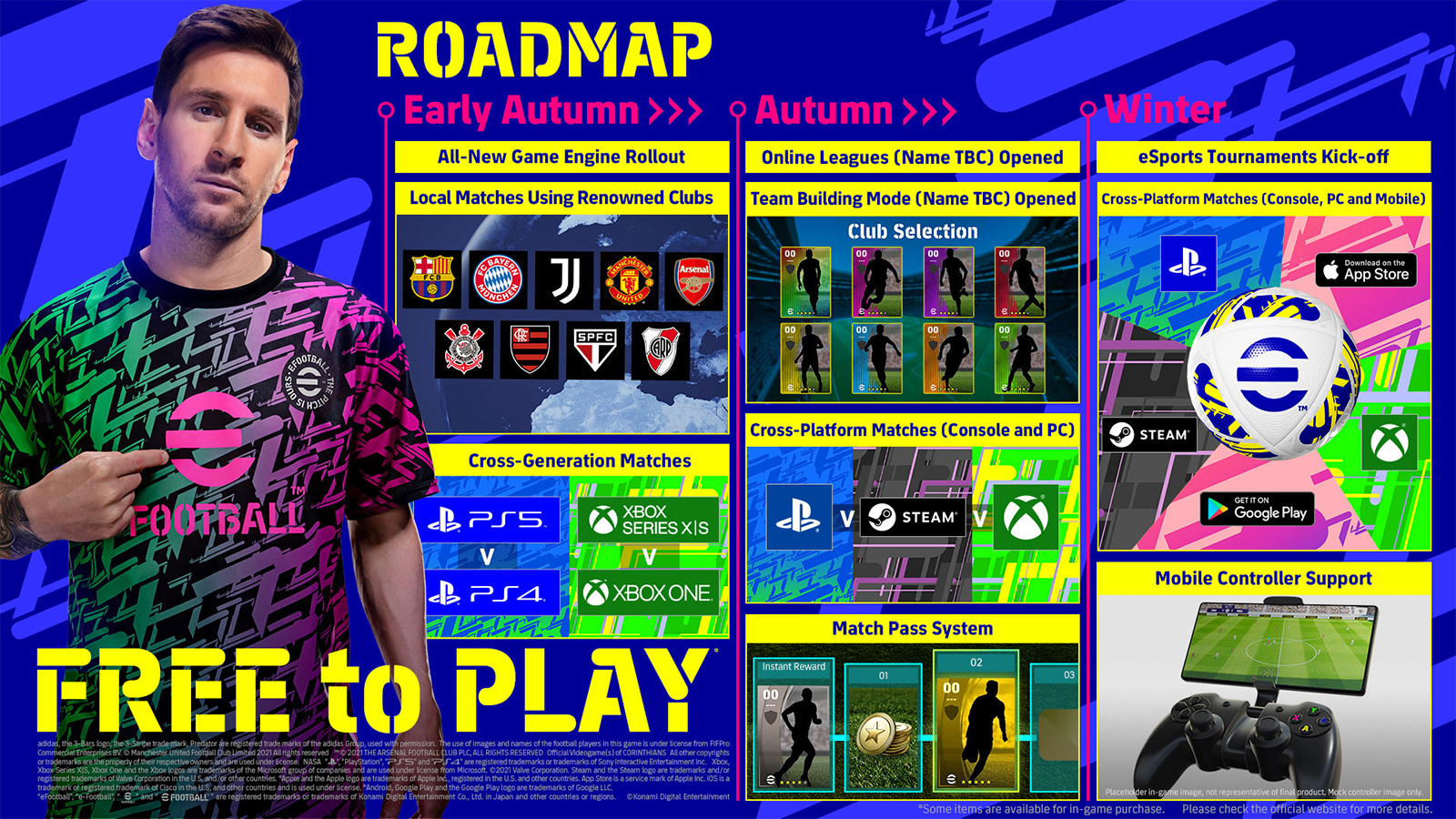 If you’re asking ‘where is PES 2022?’ we’ve got some bad news for you: Konami has announced that from this year onwards, its perennial sports franchise will be called eFootball. Under its new name, the series will become a free-to-play digital-only football experience arriving later this year. It’s quite a departure from what fans are used to from the series to date, then.

This isn’t the first time we’ve seen the series change its name, though: back in the day, Konami called its football franchise Winning Eleven. Then it became Pro Evolution Soccer. Now it’s eFootball. And it’s not just a name change: Konami has announced that eFootball is a free-to-play, “all-new football simulation platform” developed in Unreal Engine, ditching the Fox Engine it used in generations past.

The game – eventually – will target consoles, PC, and mobile, but at launch the developer and publisher admits what’s on offer will basically be a demo. That shouldn’t put you off, though; Konami plans to build on the platform over time, and will eventually build the whole platform up to be something unlike what we’ve seen in sports games before.

For everything you need to know about eFootball – once known as PES 2022 – read on below.

eFootball will be released on September 30th for PC via Steam, PS5, PS4, Xbox One, and Xbox Series X/S, and will only be available as a digital download. That is to say: there will be no boxed retail copy of the game available at launch.

An iOS and Android launch is planned for the game, too, but all we know so far is that the mobile version of the game is coming ‘later’.

Cross-platform play will arrive post-launch at an as-yet-unspecified time, but cross-generation play will be available at launch (that means you’ll be able to play on PS4 if you friend has a PS5, for example).

You can see the promised roadmap of how Konami plans to support the game with new content in the roadmap embedded above.

The release date for the game that is targeting ‘early autumn’ (read: September 30) is not actually going to be the full game. As per the developer itself, we’re going to see a particularly limited version of the game launch first, followed by a more robust experience later.

“In many ways, yes, [it will be a demo first],” says a tweet from the publisher. “We want people to get hands-on with eFootball as soon as possible, so we will launch with a limited number of teams and modes. Exact details to follow.”

Everything in this initial build will as a result be completely free. Microtransactions and add-on purchases will become available once the more complete version of the game arrives some time down the line.

A: In many ways, yes. We want people to get hands-on with eFootball™ as soon as possible, so we will launch with a limited number of teams and modes. Exact details to follow.

The base package will be free to download and play.

Local matches featuring FC Barcelona, Juventus, FC Bayern, Manchester United, and others will be available, for free, at launch.

Konami will make announcements about what other clubs and modes will be added further down the line. It remains unclear how the pricing structure will work, but the company has said some of those modes released post-launch will be paid.

One of the highlighted features that prompted Konami to move away from the PES moniker and call the series eFootball is “Motion Matching”. This tech “converts the vast range of movements that players make on the pitch into a series of animations, selecting the most accurate one in real-time”. The result? Four times as many animations will be present in this game compared to previous entries. It sounds fairly similar to what EA is doing with FIFA 22 and its Hypermotion.

“Starting with the strong foundations of Unreal Engine, which has allowed us to massively overhaul player expression, we’ve made a number of modifications to virtually create a new football game engine that will power eFootball for years to come,” said series producer, Seitaro Kimura.

A new gameplay trailer (above) also arrived recently, and it unveiled quite a lot more information about specifically what we can expect from the game when it launches (and then continues to get more features) in the coming months and years. You can find a quick rundown of what you can expect from the game in the features list below:
Controlling the ball touch
eFootball players can control the strength of each kick as well as determining dribbling speed – from a knock-on all the way up to a dash. PS5 players will feel haptic feedback using the DualSense as well as by making use of its adaptive triggers. However, the feature won’t be at launch and instead will be available in a later patch.
Tricking the Defender
Another post-launch update, eFootball promises the ability to get into “mind games” as you try to trick the defenders with feints and subtle body movements. Send them the wrong way and clear a path for the perfect goal.
Additionally, every pass creates opportunities – steal the ball by throwing your body in the way or cut off the pass with a deft foot. The choice is yours.
Introducing “Sharp Kicks”
Now, you can charge up a “sharp kick” to perform special kicks such as a sharp cross, fast lofted pass or rising shot. These new actions take more time to execute, so choosing the right moment is crucial.
1v1 Duels
One of the more impressive new additions are 1v1 duels – shifting the focus into a smaller moment midgame where it’s just you against an opposition player. These new 1v1 duels are complete with new win/loss rules – performing real-time calculations which include the ball, movement speed, body direction, physical ability, and more. All these in combination with player movement will determine the outcome and could lead to some spectacular goals.
Additionally, these duels come with a new “duel camera” – pulling the action in to focus on the 1v1 moment. And when the moment passes, the camera pulls back to a regular wider view.
Enhanced Team Playstyles and controls
eFootball adds new AI playstyles to help your team stay co-ordinated when off the ball. Combined with new attacking and defending controls, this gives players more options to play the way they want.

As part of a Twitter thread, Konami confirmed that the game’s initial launch in Autumn 2022 will be very limited in scope. The upside? The launch package will have no microtransactions and everything on offer will be available for free.

Konami has confirmed, though, that a battle pass style Match Pass will arrive in the game after launch, and that the Master League will arrive as a premium DLC post-launch.

“Previous games had a strong ‘lottery element’, but eFootball lets you nominate and acquire your favourite players with Match Pass, a system to receive items based on matches played. Free & Paid Match Passes will be available,” says the publisher.

Option Files are also due to make a comeback, but (as is tradition for the series) only for players using the game on PC and PlayStation platforms – Xbox users will not be able to use this feature. It’s unclear how Option Files will work with the mobile version of the game.

More information and gameplay details are to be revealed in late August, per Konami.