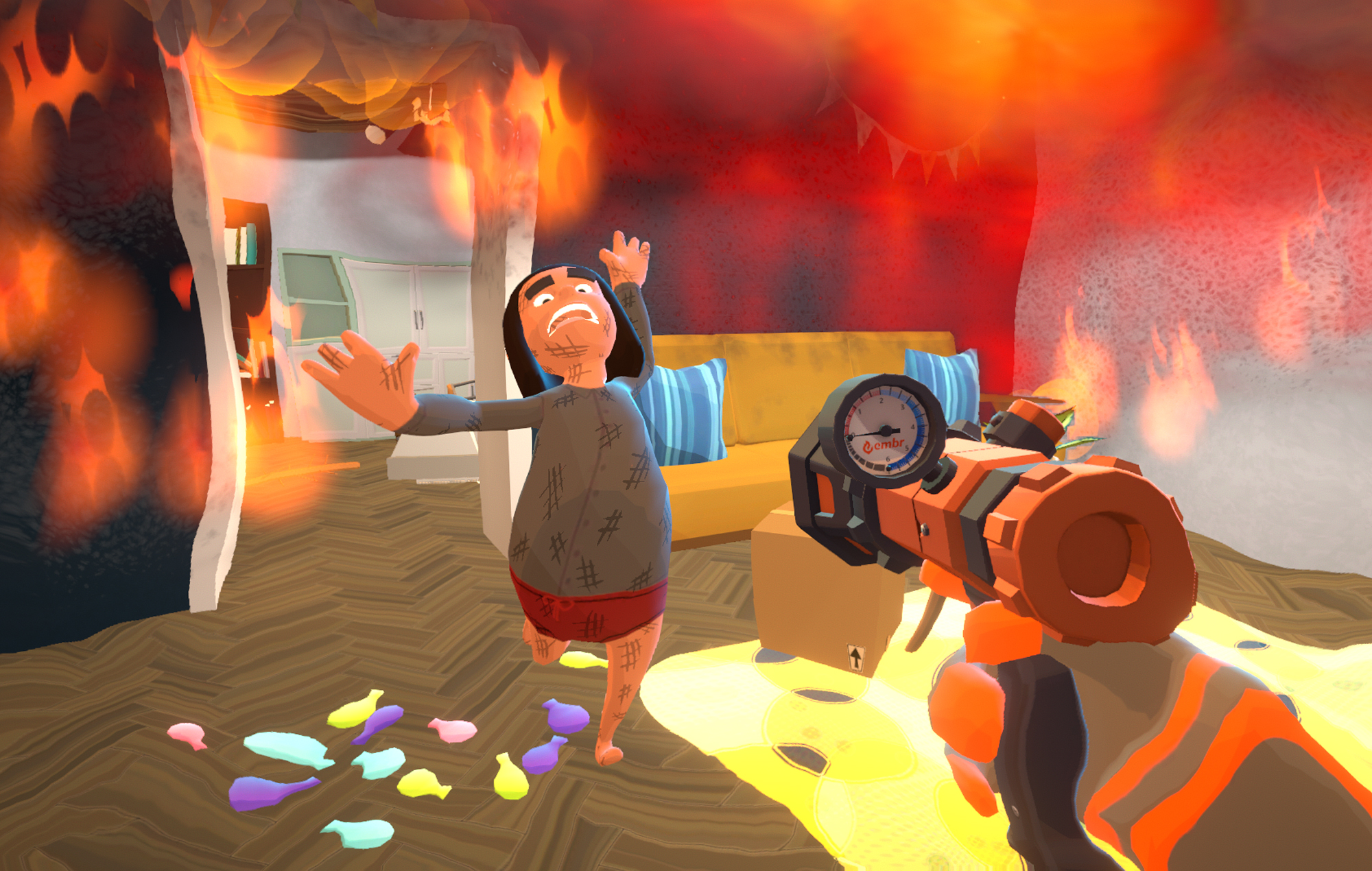 Embr sees you take control of a hose-for-hire as you save people and their belongings from burning buildings for profit. As someone obsessed with both Fireman Sam and Super Mario Sunshine at various points in my life, this Curve Digital title sounded right up with my firepole while the trailers made it look snappy, smart, and chaotically joyful.

However, the action simulation game is about as much fun as cleaning a fire engine. By hand.

The tutorial introduces you to your basic toolkit – hose, axe, ladder – as well as a scanner that helps you locate NPCs trapped inside buildings. As for enemies, our plucky young Embr firefighter has to contend with fire (which spreads violently if left unattended), toxic gas and even electricity. Both should be avoided until you can either open a window or turn off the power.

Then, without so much of a background check, we’re let loose into the world of fighting fires for Embr.

The house at FirstAve is ablaze with four people trapped inside, though you only need to rescue two to get paid. Pulling out our trusty axe, we bust down the front door and head into the flames. Grabbing our hose at the first sight of the blaze, we start trying to put it out before a message reminds us we’re here to rescue people.

Picking up one person on the upstairs balcony (via a broken window) we unceremoniously drop them in the evacuation zone outside then head back in, chop down the bathroom door and interrupt another person’s private time. Dropping them just outside of the evacuation zone, they try and scurry back to the toilet, but we stop them just in time. These people are idiots. And that’s the level completed.

Don’t worry about those other two.

We get $200 for our troubles (thanks Embr overlords) and it’s onto the next level, Oscar Heights, for more of the same. UticaAve then repeats the now familiar pattern. Unlocking Salvage mode sees you replay the level with the express goal of rescuing valuables from the house. Really, you’re just looking for bundles of cash instead of people. The chunky mechanics and surprisingly static surroundings soon grow tiresome.

Every level is a race against the spread of fire and saving more people results in a better rating, which eventually unlocks other levels. You spend more time avoiding fires than fighting them which is realistic but feels like a missed opportunity for fun.

The fourth level sees you trying to escape a burning hotel construction site after being trapped by HOSR, a competing socialist company who oppose Embr’s capitalist ways (cue – “Are we the baddies?” meme).

Presented with a series of puzzles that can almost always be beaten by simply walking through the fire/electricity and taking the damage, it’s more frustrating than challenging. A broken elevator in the basement offers salvation but despite numerous attempts, I still have no idea how to get it to work. The game offers no hints, so I look online. The answer isn’t smart, I just missed a door hidden in a room full of flames. Usually, I would have given up by now and moved onto a different game but I have a job to do.

And every part of this game feels like hard work. After escaping the construction site, a load of new modes open up which are self-explanatory and slight variations on what we’ve already seen – Embr Eats sees you delivering food to people, Demolition sees you destroying the building. It quickly gets repetitive.

Despite the quirky attitude of the game, which is filled with tongue-in-cheek ingame adverts that seem happy to poke fun at the whole premise, Embr is aimed at completionists. Levels can only be bested with a speedrunners approach of trial, error and replay which I imagine will split opinions. The game quickly built up a dedicated audience during its year-long early access period but it will also leave a lot of players, myself included, feeling cold and looking for entertainment elsewhere. It doesn’t help that there’s no real reward that comes from doing a job well done, just more work.

And perhaps that’s the point. As a comment on the tiresome, mundane and exhausting nature of capitalism and zero-hour contracts, Embr: Über firefighters makes a brilliant statement. As a game though, it’s a fine way to spray away a few hours but ultimately, it’s a bit of a damp squib. Sorry Embr, I quit.

Embr is out on PlayStation 4, Nintendo Switch, Google Stadia, PC and Xbox One now. We reviewed the Switch version.

Quick to pick up and play but never all that challenging, Embr is a collection of smart ideas that never really gel. Despite the humour, the game never really feels fun enough to warrant the constant replays that are required to progress. Encouraging players to be the best rather than enjoy the gameplay, Embr is seriously hard work.